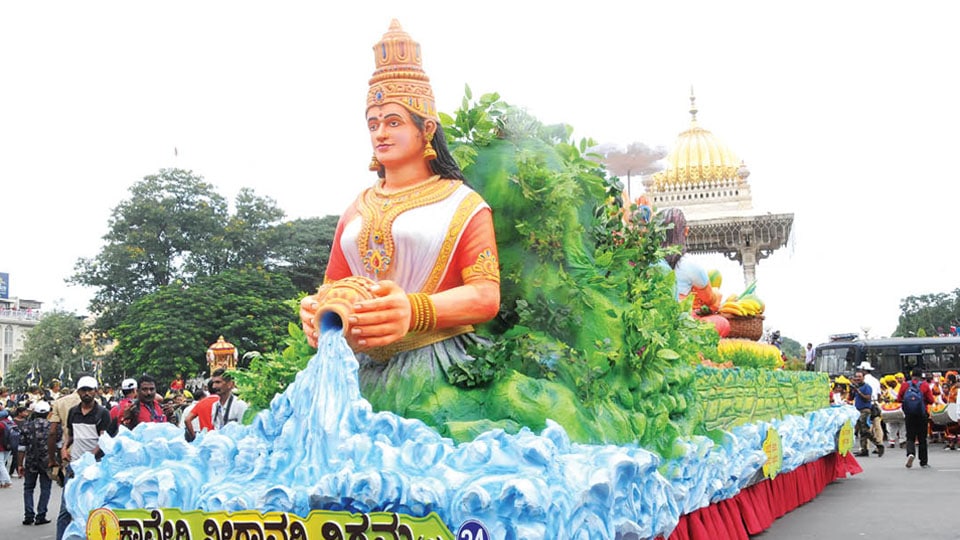 The 42 tableaux that took part in yesterday’s Dasara procession added more colour to the event, with every tableau earning praise from the huge crowd for its outstanding design and craft. FIRST PRIZE: Picture shows the rear view of the model. 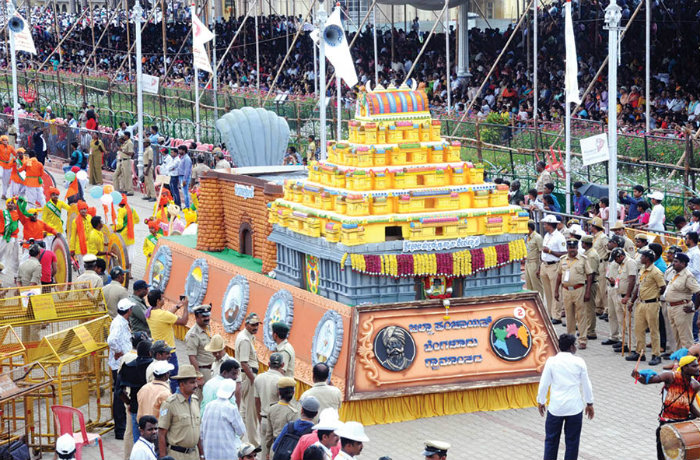 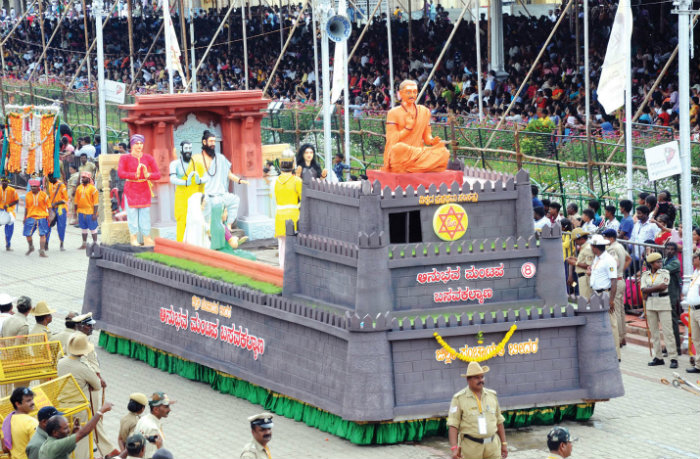 The Gadag district tableau featured reviving of trees, while that of Kalaburagi district displayed its new Airport and tourist spots. 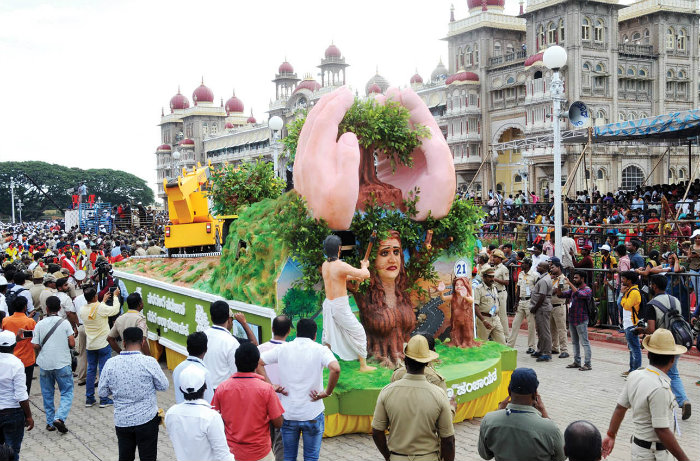 The Dharwad tableau highlighted Poet Da.Ra. Bendre’s concept of Dharwad as a Cultural City, while Haveri district tableau showcased replica of its Blackbuck Sanctuary at Ranibennur and Peacock Sanctuary at Bankapura. 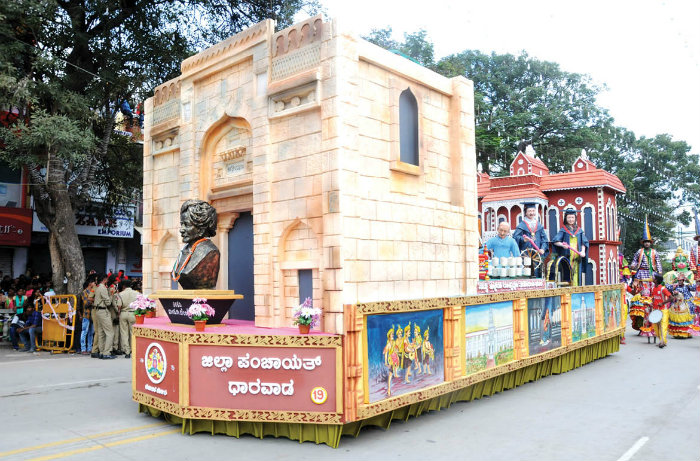 Mysuru tableau showcasing a replica of Golden Temple of Bylakuppe in Periyapatna taluk.

The tableau of National Cadet Cops (NCC) showcased its rescue and relief operations during the natural disaster that struck Kodagu in August. Under the theme ‘Lending help to flood victims,’ the tableau had candidates jumping from helicopters to rescue victims.

CONSOLATION PRIZE: The tableaux of National Cadet Corps (NCC) showcasing the rescue and relief operation during the natural disaster that stuck the Kodagu recently. 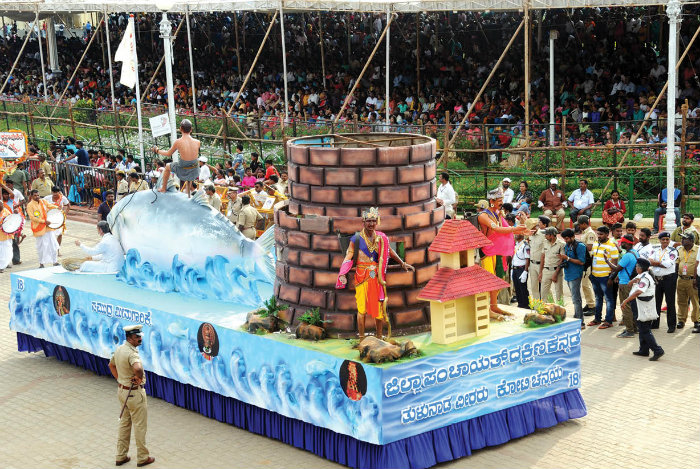 The Chikkaballapur district tableau displayed its famous shrine of Vidurashwatha and other religious places. READ ALSO  Gajapayana date yet to be finalised: Sheds being constructed to house Dasara elephants at Mysore Palace premises

The Chikkamagaluru district tableau with the theme ‘Bhoo Taayi Coffee Kanye,’ featured its agricultural corps, Belavadi Veera Narayana Temple, Bhadra Forest and Kemmanagudi, Kuduremukh and Baba Budangiri Hill Stations. The tableau by the Health Department showcased all health services rendered by it, while the tableau of Minorities Welfare Department focused on various schemes and initiatives launched by it and the tableau of the Education Department showcased Mid-day Meal Scheme, Cycle Distribution and such other schemes. 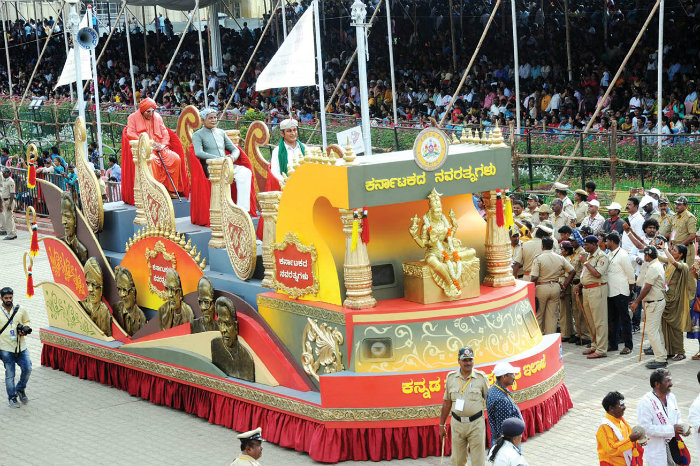 The tableau of Higher Education Department showcased the importance of Universities and the replica of a palm holding a book and was complete with a message by Higher Education Minister and also District in-Charge Minister G.T. Devegowda on LED screen. 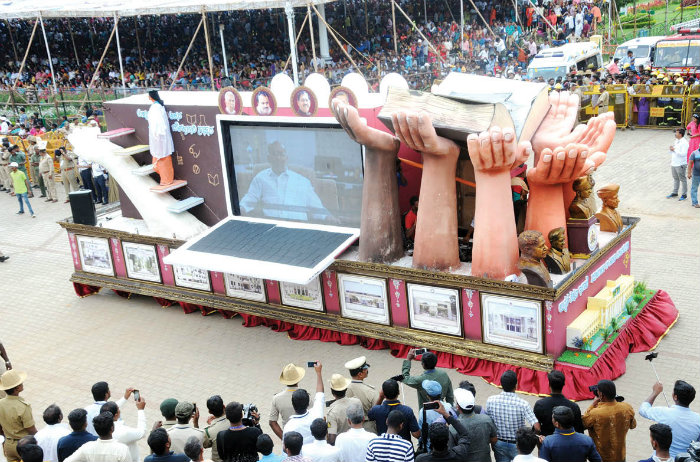 Higher Education Dept. highlighting the importance of Universities and the replica of a palm holding a book.

The Tourism Department’s tableau, under the tagline ‘One State Many Worlds,’ showcased adventure sports like Trekking, Hiking, River Rafting etc. 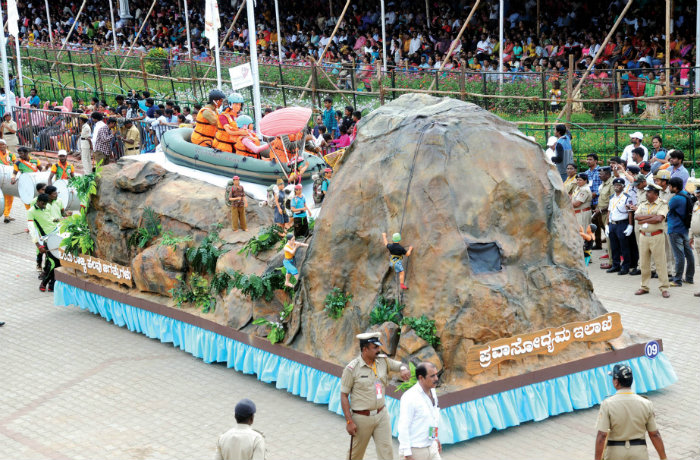 Tourism Department’s tableau under the tagline ‘One State Many World’s,’ showcasing adventure sports.

In order to create awareness about legal services, the Mysuru District Legal Service Authority (MDLSA) had built a tableau with District Principal and Sessions Court Judge S.K. Vantigodi, District Minister G.T. Devegowda and MP Pratap Simha walking along with it.