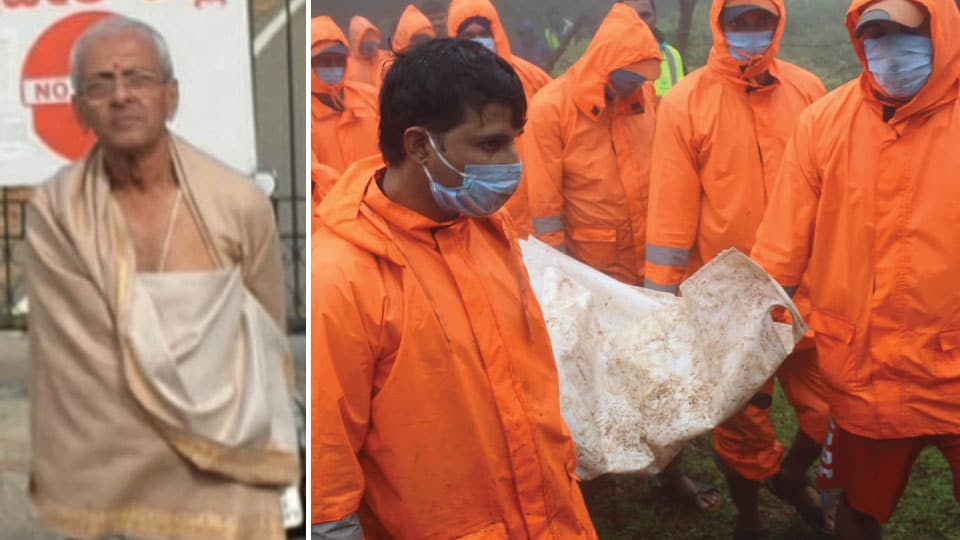 Madikeri: The National Disaster Response Force (NDRF) has recovered the body of the Chief Priest of Talacauvery T.S. Narayanachar (80) yesterday from the landslide site at Gajagiri Hill next to Brahmagiri Hill in Kodagu.

The body of one more victim Anandathirtha was found two days back. He was the brother of Narayanachar. Narayanachar’s body was found at around 2.30 pm at a place called Naga Theertha, two kilometres from his house. Efforts are on to trace the remaining three persons —Narayanachar’s wife Shantha and Assistant Priests Ravikiran Bhat and Srinivas Bhat. Yesterday, the mangled remains of a Duster Suv and an Omni van, both of which reportedly belonging to Narayanachar, were found.

Somanna said that Narayanachar had served the Talacauvery Temple for decades and it was wrong to character assassinate a person.

“Narayanachar is a senior person and a section of media is indulging in propaganda about his reported wealth, gold, cash and other valuables inside his house. All the reports are speculative and are baseless. I request the media to desist from publishing or telecasting such reports,” he said.  To support his point, Somanna said that extensive search in the area surrounding the Priest’s house had yielded house-hold utensils, puja materials and a silver statue of a God. “This shows that Narayanachar led a simple life and there is propaganda to tarnish his image,” Somanna said.

The Minister said that he and MP Pratap Simha would have to leave to Bengaluru due to urgent COVID work and would be back on Saturday. Till then, Virajpet MLA K.G. Bopaiah would supervise the rescue operations, he said.