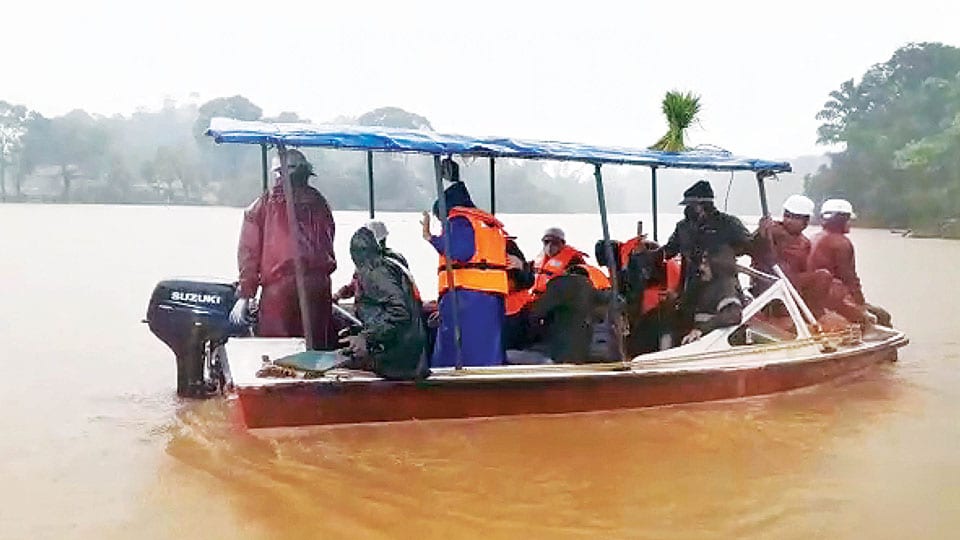 Madikeri: Relief and rescue operations at Talacauvery in Kodagu District has been hit due to incessant rains and landslides. Five persons of a family including the Chief Priest of Sri Cauvery Temple T.S. Narayanachar are said to be buried alive as a portion of the Brahmagiri Hill collapsed on two houses where the priests lived on Wednesday midnight.

Kodagu District Minister V. Somanna, who has rushed to the District, stated this morning that relief and rescue measures will be taken up only after the weather turns favourable. The National Disaster Response Force (NDRF) that has been tasked with rescue has called off the operations since last night following more landslides in the area and heavy rain that has been pounding since the last 48 hours. Along with Narayanachar, his wife Shantha Narayana, Shantha’s brother Anandathirtha Swamiji and relatives Ravikiran Bhat and Pavan Bhat are feared to be dead. Mud came crashing on two houses at around midnight on Wednesday and the mountain range that collapsed is around 30 acres.

This morning, Somanna visited Bhagamandala and he was forced to get down from his car and travel in a boat to Bhagamandala as the Kottur Bridge was overflowing. From Bhagamandala, he travelled in a jeep for a short distance but was again forced to abandon his visit as landslide had blocked the Bhagamandala-Talacauvery Road.

Minister Somanna, accompanied by battery of officials and media persons, walked to a short distance and was forced to return. Last night, the NDRF team that has been pressed into service to rescue the trapped people under the landslides informed Kodagu Deputy Commissioner (DC) Annies Kanmani Joy that it was impossible to carry out rescue operations.

The NDRF team told the DC that the place where the landslide has occurred is filled with loose soil and slush and it was a slippery area. If at all the rubble has to be cleared, it has to be done physically as earth movers cannot enter the area due to the steep terrain and there is a danger of the machines sliding away. Also, incessant rain is hampering relief operations, the team informed the DC.

Speaking to reporters, Minister Somanna said that one State Disaster Response Force (SDRF) has been stationed at Kushalnagar while one has been provided to Virajpet. “People in low-lying areas and those living in hilly areas like Ayyappa Hill and Malethirike Hill in Virajpet have been asked to move to safe places. Relief centres have been opened at Karadigodu near Siddapur, Nellihudikeri, Virajpet and more such centres will be opened depending on the need,” he said.

Meanwhile, the mud that came crashing at Talacauvery has travelled more than six kilometres taking along with it trees and boulders. The cow shed owned by priest Narayanachar and family was also washed away and there were over 20 cattle heads. The carcasses of the bovines have been found floating in the mud-coloured river near Bhagamandala. The SUV and a car owned by the priest too have been found washed away and it has reached more than eight kilometres from the place of the landslide.

The children of priest Narayanachar are settled in Australia and they have been informed about the incident. The children have expressed their inability to come to India due to COVID-19 pandemic and as international flights have been suspended. District Administration sources said that the children have urged the District authorities to find and perform the last rites of their parents and relatives.