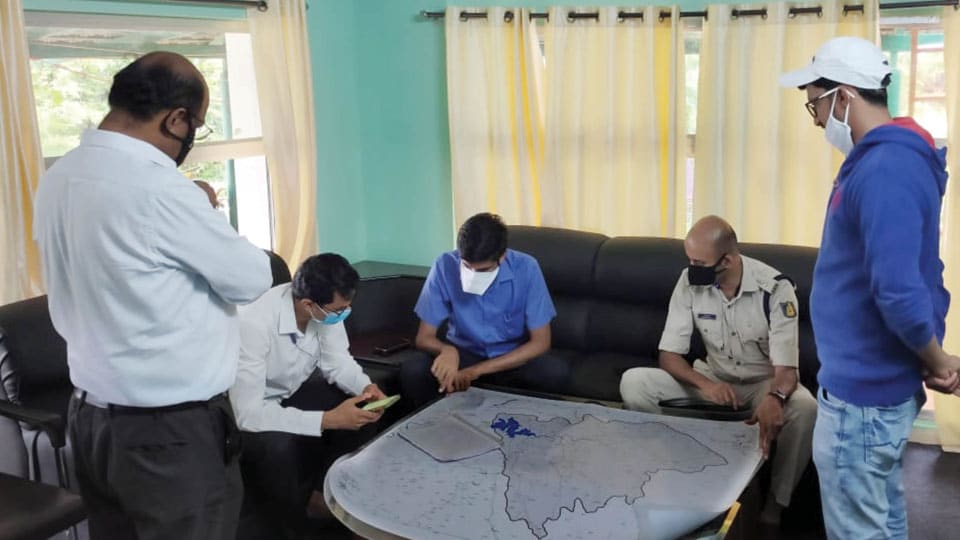 The DC and officials examined the Emergency Action Plan prepared by the Dam officials where it has been indicated that 36 villages in Mysuru, Kodagu and Hassan Districts will be marooned if more than 20,000 cusecs of water is released from Harangi Dam.

The villages are located in an area of 96 kilometres from Kushalnagar till the backwaters of Krishna Raja Sagar (KRS). The DC was presented with the map of the area and the extent to which villages will be submerged. From Aug. 1 to 7, Harangi Dam has received 8 tmcft of water and already 4 tmcft has been released.

Already due to the water release, water has entered into residential areas of Kushalnagar and the Koppa-Bylakuppe Road has been cut off. Also, the Kushalnagar-Madikeri Road is blocked and water is flowing two feet above the road.

Outflow from Harangi Dam has touched 13,000 cusecs and the Dam officials have been asked to keep only 75 to 80 percent of the water in the Reservoir and release the rest. According to Harangi Dam officials, the floods are caused not due to the water released from the Dam but from the increased flow of River Cauvery that reaches Kushalnagar through Balamberi, Bethri and Siddapur.

Like the last two years, this year too, the Harangi catchment is receiving less rainfall. River Cauvery carries excess water that floods the villages, reasoned officials.

Meanwhile, Madikeri MLA M.P. Appachu Ranjan has said that the silt removal project taken up with an estimated cost of Rs. 89 lakh in May this year has actually prevented flooding in Kushalnagar.

In the previous two years, there was unprecedented flooding in Kushalnagar and most of the areas inside the town were under water for weeks together. Last year, for the first time, the 400-year-old bridge near Kushalnagar-Koppa border (next to the newly-constructed bridge) submerged on Aug. 10. This rain, coupled with huge water release from Harangi Dam, brought untold miseries to the people of Kushalnagar.

The silt-removal project was taken up to prevent flooding like in the previous years. An area of 300-metre length and 100-metre width was identified in the surroundings of Rasool Layout, Muthappa Swamy Temple and Ayyappa Swamy Temple.

The mud-and-sand combined silt was removed by earth movers and the excavated earth was dumped on the river side. Also, channels were built so that rainwater that floods Kushalnagar town could smoothly enter the river.

“The project was taken up without calling tender due to urgency. But the project was abandoned as people raised objection. But I am happy that the half-completed project has so far prevented large amount of water entering Kushalnagar,” Appachu Ranjan  told Star of Mysore.

Following threat of landslides on the Madikeri-Mangaluru Road, the Kodagu Deputy Commissioner’s Office located on a steep gradient on the road is under threat of collapse. As a precautionary measure, the main offices located in the DC Office Complex have been shifted.

Henceforth, the DC Office will function from the Office of City Municipal Council. Only essential sections will be operated and the other non-essential wings will be closed.