Home » Columns » Abracadabra By K. B. Ganapathy » Tale of a Hill called Chamundi in Mysuru: My thoughts on Saving the Hill 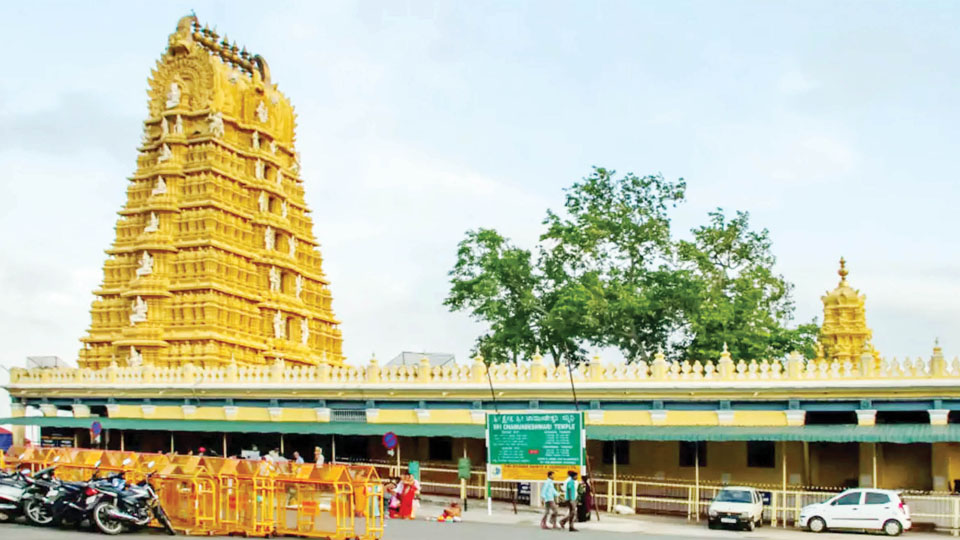 Tale of a Hill called Chamundi in Mysuru: My thoughts on Saving the Hill

Citizens of Mysuru city have been hearing wise men and reading scholarly articles and detailed reporting of events connected to the only hill that Mysuru has, Chamundi Betta for as long as I remember, that is over 50 years. The only concern was: How to save Chamundi Hill?

That means, Chamundi Hill was in danger of vandalism by its management and of heavy landslides due to heavy rainfall. Thank God, it is not prone to earth-tremor or earth-quake.

In the early 1970s, the concern was about the people from the surrounding villages of the hill like Lalithadripura, Uthanahalli, Hosahundi, Gudumadanahalli, Gowrishankar Nagar, Datta Nagar, etc., poaching into the hill from different directions, collecting forest wealth stealthily though there used to be Forest Rangers keeping watch.

Villagers would allow their cattle to graze in the forest thus ruining the hill’s greenery which in any case was not thick with foliage. A major area of the hill, as is now, was covered with tropical deciduous thorn-scrub type of vegetation. The forest is protected as reserve forest by the Karnataka State Forest Department since 2001. Earlier to this, it was like a no-man’s land! During summer, there used to be forest fire and it made big news blaming the villagers as arsonists.

The hill is situated in the South-East direction of the city, 12 kms from the Palace as one winds the motorable way to the temple. It is about 3,489 feet above sea level. The hill has a periphery of 14 kms and a surface area of 17 sq.kms. It embraces seven hillocks as we see it from a distance. Indeed not a huge hill but it has its significance to Mysuru city and the Royal family.

Chamundeshwari, the Goddess, is the presiding deity of the Mysore Royal family and the local people. Outsiders also venerate the Goddess on special days. Therefore, the hill temple is primarily a pilgrimage centre, not a tourist centre, as the present Government authorities believe.

The history of Wadiyar dynasty says that Chamaraja Wadiyar IV, one of the Kings, was once struck by lightning during his visit to the hill and miraculously survived, but lost his hair on the head completely. He, thus, came to be known as Bald Chamaraja (bald in Kannada means bola) or Bola Chamaraja Wadiyar. As he survived the lightning effect, he attributed it to the divine grace and adopted the Goddess as the family deity.

His successor Dodda Devaraja Wadiyar (1659-1673) followed the tradition and improved the temple and looked after its upkeep. He got 1,008 steps to the temple from the foot of the hill constructed (1664) that are still being used by the devotees.

So basically Chamundi Hill is not a tourist centre but it is a pilgrimage centre. Only Hindus visit the temple. Others visit the hill up to the “View Point” from where they see the Mysuru city, at night all lit and beautiful and also visit the black, granite monolithic giant statue of the famous Nandi.

So let there be no mistake. Chamundi Hill is not a tourist centre nor the devotees who visit in thousands all the 365 days want it to be converted into a hybrid-location of a tourist-cum-pilgrimage centre. The Karnataka Government must first decide on this issue.

Once this issue is decided, then the question of developing the pilgrimage centre could be considered as per the NEED of the devotees. What are they?

1. Demolish unwanted old and new constructions (that came up more for greed and not for the need) with the defined campus of both Chamundeshwari Temple and the ancient Mahabaleshwara                         Temple nearby.

2. Ensure cleanliness on daily basis as if it is part of the service to Goddess as much as to the devotees.

3. Do not allow sale of puja items like flowers, camphor, vermilion, fruits like coconut and banana etc., within the precincts or close proximity to the temple.

4. Allow only VIP vehicles and new vehicles brought for puja at the huge open area to the left of the temple at the entrance.

5. Already a multi-crore project of multi-level parking complex and a huge complex of shops for vendors of puja items, sale of trinkets and tea stalls are there with 194 shops. Therefore, no further construction is required for shopping outlets.

6. There are already two good, asphalted roads to go to the temple — one from Nanjangud-Uthanahalli side (after a visit to Jwalamukhi Temple) and another from Mysuru city. So the road connectivity for a hill temple is sufficient, if properly regulated by the authorities.

7. The recent heavy rains have exposed the fragile nature of some areas of the hill which led to the landslides. The road that led from the View Point to the Nandi statue was so heavily damaged, it had to be closed. Repair and restoration work is undertaken, but wisdom lies in closing that road for vehicular traffic and make it a walkers promenade with proper security etc.

A geological survey of the whole hill could be conducted to identify the areas vulnerable to landslides during monsoon and steps taken like chain-link retention or stone-masonry retention walls etc., as per the engineering requirement.

8. Let there be a moratorium on future construction of any kind unless an expert-body, which shall include the            NGOs, make an exception as per the need.

9. There is a huge village of residents close to the temple on the slope of Devikere, the Kalyani, which is expanding by the day. All construction on this land must be banned forever and owners of the land be compensated as relief. Otherwise sooner or later there will be a major disaster if the hill experienced heavy rains.

10. The authorities must thoroughly examine the landscape of the temple premises and ensure proper drainage system to discharge all rain water instantly to prevent landslide. Notice the sharp, deep landfall in front of the temple tower. Experts could be drawn into this work. Prevention is better than cure.

READ ALSO  Fissures on Nandi Statue to be fixed with adhesives

11. There must not be a ‘Chamundi Hill Gram Panchayat’ like now which is highly politicised. It must go. In its place a separate, autonomous ‘Chamundi Hill Authority’ must be set up with the Mysuru Deputy Commissioner (DC) as the head but under the independent charge of an Assistant Commissioner. The Karnataka Government may pass required legislation in this regard so that the vested interest groups might not interfere in the affairs of the Chamundi Hill and its temple.

These are some of my stray thoughts to Save Chamundi Hill for the future but there is a new danger now looming large to further vandalise the hill and desecrate the sanctity of the temple (by making it a tourist attraction).

I am talking about Central Government’s iconic scheme for Hindu temples known as holistic “Pilgrimage Rejuvenation And Spiritual Heritage Augmentation Drive” (PRASHAD, for short). This grant from the Centre is to develop the temples’ ‘ecosystem’, whatever it means!

We hear that about Rs. 100 crore will be granted to our hill temple for this purpose and our authorities are eager to use this fund somehow and according to reports, they have come up with two specific plans.

One: To provide railings to 1,008 steps going to the temple, apparently to help the           devotees to ease the strain of the climb.

Two: Provide a ropeway to the temple. Wonder what  would be the next plan if that Rs. 100 crore is still not spent completely.

In my opinion, both the above two projects are ill-conceived and wasteful for many reasons. Ropeway for such a small distance of this small hill is not necessary. Sooner than later the fun and excitement of it even for tourists will wane as the time on the ropeway is too short for enjoyment for children and even adults.

Think about all this and do not lead us into darkness. Spend the grant from the Centre to fence the hill area all around. In the 1980s I had attended a meeting in the DC’s office where chain-mail fencing along the periphery of the hill was discussed. Increase the watch and ward (it will give employment) under the Forest Department. Provide water-holes and salt-licks for the denizens of the hill forest. Come monsoon, undertake rejuvenation of the rocky-surface of the hill with sustainable vegetation and plants and intensify the scheme of sowing the seed balls.

Thanks to a couple of Conservators of Forest who had many years ago (in the 1980s) ventured to “Green the Hill” and did succeed to some extent by planting selected tree saplings in certain fertile areas with special pits and manure. Many of them survived and we could see more greenery now. But those who came later did not have the vision. If, in a free country, you do not have patriotism, you will not have commitment to your work, you are a slave working for wages. Wake up Bharatiya !

8 COMMENTS ON THIS POST To “Tale of a Hill called Chamundi in Mysuru: My thoughts on Saving the Hill”