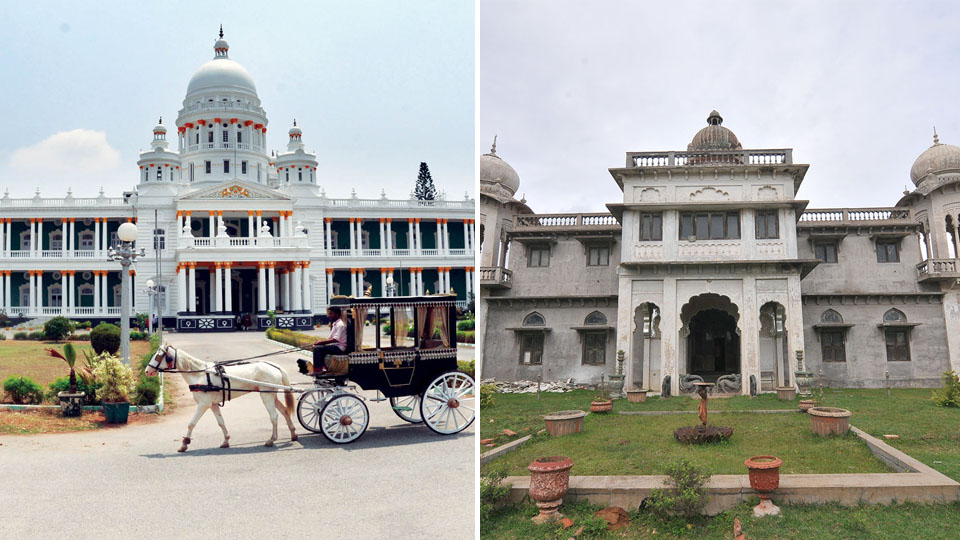 Our city’s second largest Royal Palace, Lalitha Mahal Palace, has been waiting for a resurrection for nearly half a century now. The wait has been on since 1973 when it was first handed over to India Tourism Development Corporation  (ITDC), a government body that did very little to, let alone enhance its grandeur, but even to retain its fading glory.

But it was not always like this. According to Arun Shourie, the man in charge of divesting during the NDA government, in his book ‘Governance and the sclerosis that has set in’ says, “In 2002 when a case was made to divest hotels under ITDC, Lalitha Mahal Palace Hotel in Mysuru was the only ITDC Hotel in the whole country that was making a profit.” In fact, it remained profitable until the 6th Pay Commission, when a dish-washer in Lalitha Mahal was paid Rs.18,000! And a receptionist Rs.45,000! If this is the pay structure, how could a Hotel survive, let alone compete and make profit?

The other reason was the inability to upgrade rooms. Even a small plumbing work in the Hotel required permission from the State Tourism Department, which owned the hotel.  Why? Because to fix the old pipes one had to remove the tiles. And tiles were deemed heritage!

At the moment, Jungle Lodges and Resorts, a State government body, has been given permission to run Lalitha Mahal Palace Hotel but this State-run company manages Lodges in the Jungles, as its name suggests. It doesn’t have any experience running a luxury hotel or maintaining a heritage structure.

More importantly it does not have the budget to restore the grandeur of a structure such as Lalitha Mahal Palace. That is why the government, while calling a global tender to lease Lalitha Mahal Palace, must strongly consider the company’s history and expertise in not only managing and restoring heritage properties but also pay attention to the company’s financial prowess to restore the Palace, just as much as it considers the financial returns to the government.

The resurrection of Lalitha Mahal Palace is very important to Mysuru. It will give a new lease of life to our city as a tourist city as one of Royal history and heritage.  When a professional hotel group takes it over, be it Taj,  Oberoi or ITC, they will create not only our city’s first truly five-star hotel, but also sell our city to high net worth tourists while making the hotel itself a tourist attraction.

We have an example in that with what Taj Hotels did to the once dilapidating Falaknuma Palace Hotel in Hyderabad. Once Taj took over the property, they spent crores to renovate it and today that hotel has become a tourist destination as much as it is a hotel.

The hotel is open to tourists on weekends, where along with guided tour of the Palace you also get a luxurious high tea at a high price of Rs. 3,000 per head! This high tea session is available in Lalitha Mahal too, but it is nowhere as popular, luxurious, educational or awe-inspiring as it should be.

While the State government hands over Lalitha Mahal Palace to a professional hotel group may be they can also pay attention to other tourism enhancing opportunities.

There are small achievable projects the Tourism Minister can complete which will boost tourism — Control the parking and fake sandalwood mafia around tourist spots; Vacate the illegal mutton stalls, hotels and saree shops that line either side of the road leading to Chamundi Hill; Build parking complex for Zoo; Throw open Government Sandalwood Oil Factory & Silk Factory for tourists; Hold weekend cultural programmes at the Palace premises. And finally construct good road to KRS and maintain the Brindavan Gardens to name a few.

For now, let’s hope this government achieves what previous governments could not — restore Lalitha Mahal to its original glory.

Can the Royals revive the Jewel on the Hill?

While Lalitha Mahal Palace can be a luxurious Palace Hotel, the truly luxurious hotel in Mysuru, if revived, has to be the Rajendra Vilas Palace atop the Hill. It was and still can be a luxury hotel with a hill station feel in the heart of a city, an unmatchable USP.

Three years ago speaking to SOM, Pramoda Devi Wadiyar, ‘Trustee’ of the property,  when asked  if she was willing for a joint venture to run the Rajendra Vilas, she said, “I am willing to consider it and have had a discussion. However, my first priority is to retain the property. I do not want to relinquish the ownership at any cost. In the last three-and-a-half years, I have cleared a lot of liabilities. Today my ancestors and my husband can be proud of me.”

We hope she can give this slice of heaven in Mysuru to a professional company, which would really boost Mysuru’s image as a tourist city. We are sure her husband, the late Srikantadatta Narasimharaja Wadiyar would love to see this jewel on the hill sparkle, and after all he always felt he was a “hotelier.”

This reminds me of the interview I had with Wadiyar in 2008 when he was busy restoring the Rajendra Vilas Palace and hoped to restore the glory of the Palace on the hill. Here is an excerpt from that interview:

SOM : You are a big believer in Vaastu and Astrology. So is the Rajendra Vilas built according to Vaastu?

Wadiyar: We have spent a considerable amount of money and time to make it as per vaastu. In this Palace vaastu principles had not been taken into consideration at all. First of all, the building is facing North East, which is a no no. The direction which vaastu tells a person to build a house is either East or North. So anything oriented to the North East, North West, South West and South East are considered what is called Kaataaya. It’s not good Aaya. So the direction of North East is not considered very good. Now we have this North Eastern portion which is a semi-circular area.

The semi-circle was built so that two negatives make a positive. Like North East is a negative area, so the semi-circular structure together will make a positive area. But we had two toilets on this area, which were facing exactly North East. It was considered not very good. So we had to leave the whole thing and then we decided that on top shall be a suite and the one below it shall be a restaurant facing the city and the restaurant will have glass conservatory because as you know the problem here, mosquitoes.

The view is a major attraction, so we need to have people looking down and seeing the view of the city and enjoying their drink or having something to eat rather than trying to rid themselves of mosquitoes.

SOM: So the restaurant is going to have a glass cover so the customers can enjoy unrestricted view of the city?

Wadiyar: Yes, we’ll have a restaurant down here and on top will be a suite. And we are going to have two bathrooms which will have completely tiled glass. The sides will all be tiled with glass with a tint, so people in the bathroom can see outside, but people from the outside cannot see inside. It is a one-way mirror glass.

SOM: Rajendra Vilas Palace has never had a successful run as a hotel. First it was the Welcome Group, then it was …

SOM: What I’m asking is, considering its history or rather track record, are you apprehensive about it being a successful hotel?

Wadiyar: Let me tell you one thing. Welcome Group was very good with us. But then of course, we had the Taj Group. Somehow we had problems getting along with them. Then in 1997, we had to close this hotel and, of course, after having closed it down, we got the possession of this property in 2000 from Taj. And from then onwards we started doing the renovation. The building was in a bad shape. Now finally we have done all the necessary structural changes and renovations. I am quite pleased with the vaastu that we’ve been able to make.

SOM: Won’t it be easier to just give it to Leela Hotels or Oberoi Hotels who have been successful at managing grand hotels?

Wadiyar: I am not interested in Leela. After all, our input is a few crores but the return on this property shall be extremely high. We’re not interested in giving it to someone else. It is my property and I will take care of it. To add, I have the pleasure of doing up the place. I have spent a lot of my time and effort in this project. Moreover, this was envisaged to be done by my grand uncle.

And you see, I also considered the fact that, what is going to be my competition in Mysuru. I also went over my advantages and disadvantages. The advantage that we have is that we have an outstanding location. It has a fantastic view and I don’t think anywhere in Mysuru you will get a property with this kind of view and location. And the disadvantages, yes, it’s not close to the city. So invariably, people will have to drive up quite a distance. Lalitha Mahal, which is our main competitor, may be an extremely large and palatial building, but we have an unmatched view of the city. What is Lalitha Mahal known for? Rolling marble floor, high ceiling, ornamental light fittings and the great amount of plaster work and the wedge wood kind of work. We too want to have marble staircase here and the landing will also be in marble. We’ll have these canisters on the side, with a banister going up. We’ll have all those lights which you have in Lalitha Mahal. I had to do this because I want to charge Lalitha Mahal rates. We have the room size, only the ornamentation was required. Then, of course, we had to do this because I want to be number one. In Ooty, I’m number one. In other places I could be number one,  but in Mysuru it is going to be difficult with Lalitha Mahal around. But with the renovation and the location I believe that we have an advantage over the bigger Lalitha Mahal Palace Hotel.

SOM: Where are the architects from?

Wadiyar: The architect is sitting in front of you. (laughs)

SOM: What about the interiors?

Wadiyar: The designs are given by me, the concept has been done by me, the execution is done by someone else. This project is my baby.

SOM: So what are you now, a politician, an official (KSCA) or a hotelier?

While Lalitha Mahal Palace Hotel may very well be on its way to regaining its glory, let’s hope Pramoda Devi Wadiyar too will find a worthy company to manage the brightest jewel in Mysuru’s architectural landscape, the fabulously located and majestic Palace on the Hill — Rajendra Vilas Palace. And in doing so bring her late husband late Srikantadatta Narasimharaja Wadiyar’s dream to fruition — a mark of royalty shining on the Hill in the middle of a Royal city.