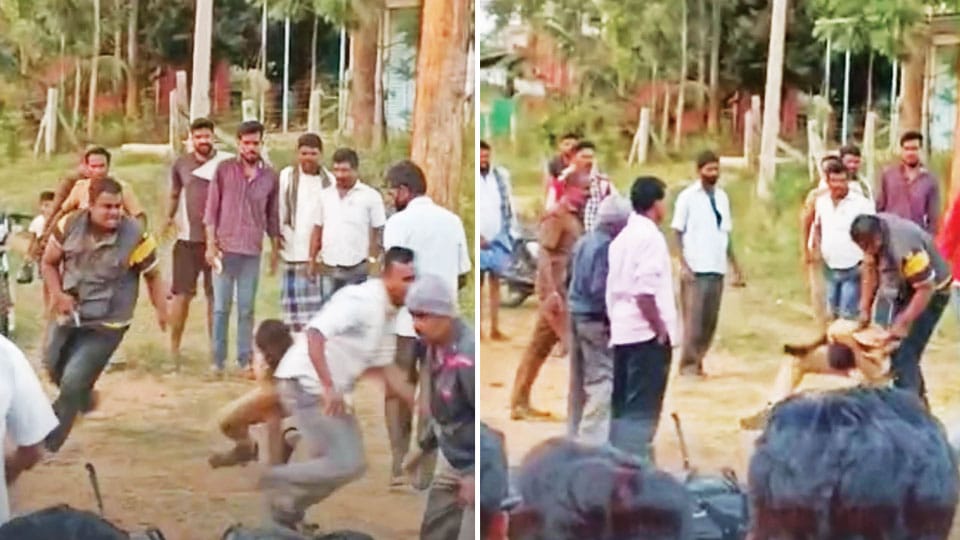 Mysore/Mysuru: An incident of Road Rage, where a bike rider stopped a KSRTC bus and stabbed the bus driver has been reported on Mysuru-Hassan Highway, about 31 kilometres from Mysuru.

The injured bus driver, identified as Venkatesh is undergoing treatment at a private hospital in city and is said to be out of danger.

The driver took a turn on Hunsur Road and was proceeding on Hassan Road when a cow suddenly came on to the road forcing the bus driver to swerve slightly to the right side to avoid hitting the animal.

The alert bus driver then immediately pulled back to the left lane.

Meanwhile, three persons, triple riding on a bike, who were coming on the right lane from the opposite direction,  were irked as the bus driver had moved momentarily to their side. So as the bus passed them, they took a U-turn, chased the bus,  stopped it at Hosaramanahalli village and began to abuse both the driver and the conductor when they got down to explain.

After driver Venkatesh and conductor K.T. Harish Kumar got down from the bus to explain why they moved slightly towards the right side, one of the bike riders picked up a quarrel and began to hurl abuses and then suddenly caught hold of Venkatesh and thrashed him. One of the riders then pulled out a knife and began stabbing Venkatesh.

Meanwhile, a crowd that had gathered consisting of local villagers, passengers and passersby remained mute spectators not doing anything to stop the assault or the assailant.

The rider, after being done with Venkatesh went after conductor Harish, who managed to run to safety. The bike riders then fled from the spot.

Though the whole incident took place in front of passengers none of them came to the driver’s rescue even though the driver had swerved not only to prevent hitting the cow but also for the safety of passengers. Fortunately, a few passengers captured the incident on their mobile phones and the footage has now been shared with the Police as evidence.

Bilikere Police, who rushed to the spot, conducted mahazar, registered a case and shifted the bus driver to a private hospital in city. Also,  four Police track teams have been formed to trace the assailants using the video footage.