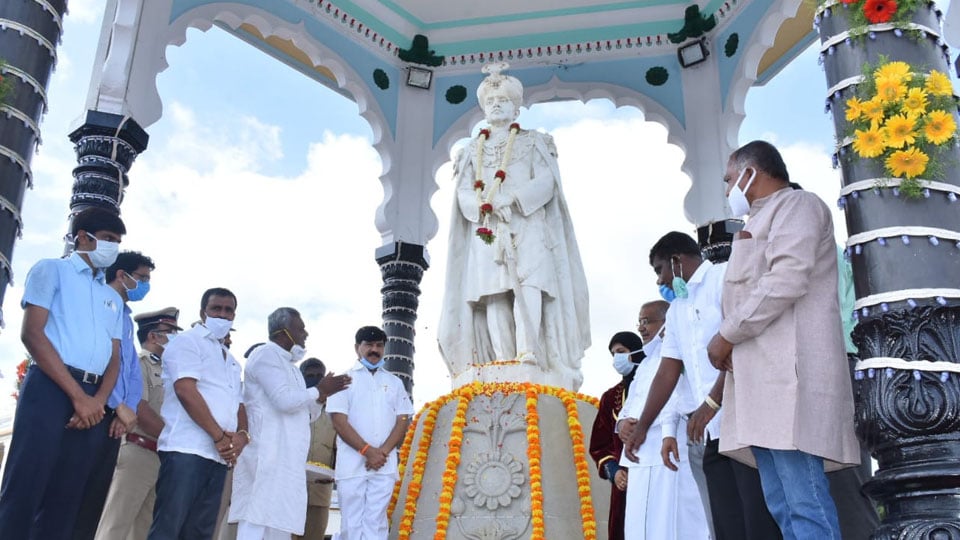 Ten personalities to be honoured every year in memory of Nalwadi

Mysore/Mysuru: “The contribution of Rajarshi Sri Nalwadi Krishnaraja Wadiyar to Mysuru and the State is immense. It is the Government’s duty to honour the Wadiyar. In this direction, every year, the District Administration will choose 10 personalities who have served in various fields and honour them in the name of Nalwadi,” announced Co-operation and Mysuru District in-Charge Minister S.T. Somashekar this morning.

Speaking to media on the sidelines of Nalwadi Jayanti celebrations, the Minister said that due to COVID outbreak, the selection process was not complete and the same will be completed in a week or two.

A letter has been written to the Chief Minister in connection with the reopening of Mysuru Zoo which remains closed due to lockdown, the Minister said and added that in another couple of days, order will be issued.

“Chief Minister B.S. Yediyurappa’s son B.Y. Vijayendra is not behaving like a Super CM as alleged by Siddharamaiah. Vijayendra is not interfering in any of the works. It has been three months since I took charge and I have not come across any such situation. As far as I know, my colleagues too have not faced any such situation,” the Minister said in reply to a reporter’s question adding that Siddharamaiah’s statement is baseless and Vijayendra has not interfered in any of the transfer matter. “So far, I have never witnessed any situation where the Chief Minister has asked any MLA to meet Vijayendra and discuss their problems,” he reiterated.

When asked about the discussions going on about Siddharamaiah becoming the CM again, the Minister said that the CM’s post is not vacant and B.S. Yediyurappa will be the CM for three more years. Government is not facing any problem and some people are unnecessarily creating such confusions, he added.

CM will keep up his promises

“The Chief Minister had always kept his words. BJP is a disciplined party. No one is upset in the party and no one is lobbying for MLC post. Including Mysuru, it is common to hold discussion with the respective leaders, aspirants, MPs and MLAs, which is being portrayed as lobby,” Somashekar said to another query.

He further said: “Not only A.H. Vishwanath, but also R. Shankar, MTB Nagaraj and Pratap Gowda Patil are all aspirants of MLC post. We have requested the CM to give them post. However, the CM will take a proper decision.”

No need to panic about COVID

“COVID-19 is under control in the district. But, the positive cases are emerging from those who have come from other States including those from Mumbai. Steps are taken for their treatment. Everyone is under quarantine and so, no need to panic,” he said.