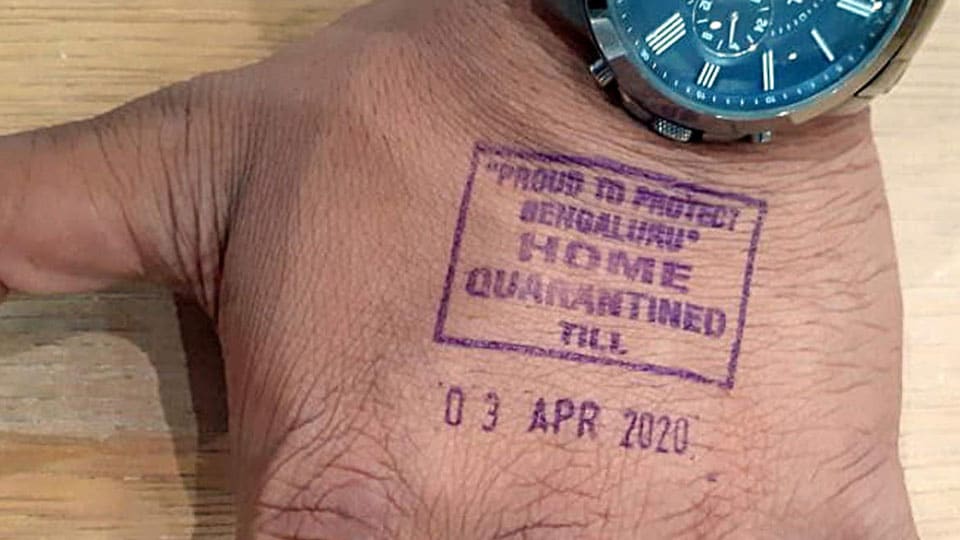 Public, Resident Associations appealed to call Police ‘100’ if they see hand-stamped people around

Bengaluru/ Mysuru: As shopping malls, hotels, temples and religious institutions are all set to open for public on June 8, Karnataka Chief Secretary T.M. Vijay Bhaskar has directed all the shops, offices, malls, commercial establishments and even temples and other places of worship like mosques and churches not to allow COVID-stamped people to enter their premises before the completion of the prescribed quarantine time.

Vijay Bhaskar, in an order this morning said, “All business establishments, temples and religious places should not allow those with quarantine stamp (on the back of their palm) to enter before the end of their quarantine period or till they get current COVID-negative test report. In the event of a violation, Bhaskar said the Police should be informed at 100.”

He also issued the order to all malls, religious places, hotels and others to first check for quarantine stamp on all their customers or visitors before they enter the premises. He further sought assistance from the general public, Residents’ Welfare Associations (RWAs) and commercial establishments in regulating the movement of people who have arrived from other States and are under home quarantine.

The general public, hotel managers, staff, temple security and RWAs must call the Police if anyone with a quarantine stamp enters their premises.

Meanwhile, most hotels and restaurants in Mysuru are bracing up for a restart of business to a new normal after a gap of nearly three months. Hoteliers are awaiting guidelines from the State Government, which in turn is awaiting directions from the Union Government on the regulations to be put in place.

READ ALSO  Many in Mysuru are abandoning pets on streets — helpless, scared, and hungry

While a majority of hoteliers are preparing to restart on June 8, about 20 percent of them have resorted to wait and watch policy as they need some more time to study the guidelines. These hoteliers are also awaiting the return of their employees who went back to their native places after the lockdown.

Hotels have begun cleaning and sanitising their premises. Utensils, linen and other crockeries are being sterilised and cleaned along with fridges, ovens, cleaning machines and all other food-preparation equipment. The hotel staff are also being trained on handling customers and maintenance of regulations.

Checking of electrical connections and minor civil and general works are being undertaken in most of the hotels. Mysuru Hotel Owners Association President C. Narayanagowda told ‘Star of Mysore’ that a meeting of Association members has been convened at the Association premises in Krishnamurthypuram at 11 am on June 5 to discuss the implementation of the anticipated Government guidelines.

Narayanagowda said that the Association had submitted a memorandum to Mysuru Mayor seeking total exemption from Building Tax for the year 2020-21. “Hoteliers have suffered huge losses due to the shutdown and we have urged the MCC to offer 30 percent rebate on tax for the subsequent three years,” he said.

Temples too are bracing for reopening from June 8. The Muzrai Department recently held first round of talks with priests and temple staff on the preparations to be made to conduct rituals, routine worship and other sevas.

Chamundi Hill temple Executive Officer M.S. Yathiraj Sampathkumaran, who is also the Mysuru Muzrai Tahsildar, told ‘SOM’ that priests have been explained about the regulations to be followed.

He said that square and circle box markings are drawn in and around the temples for social distancing during Darshans. All precautionary and safety measures are in place, he said and added that the entire Chamundeshwari Temple premises is being cleaned and sanitised.

Face masks is mandatory and thermal screening will be done at the entrance. Sampathkumaran said that Prasadam will be distributed only at designated counters with no-contact measures.