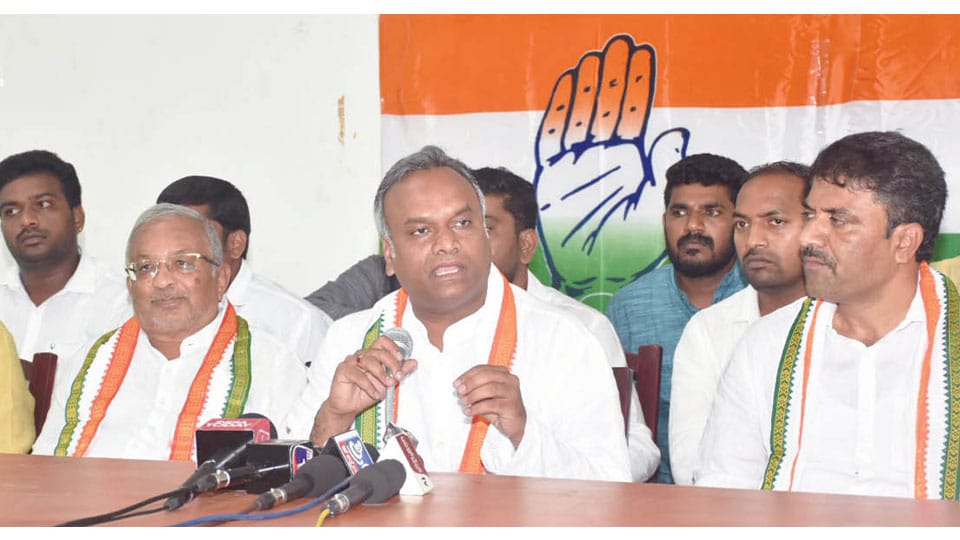 Mysore/Mysuru: Accusing the State Government of spreading hatred and communal divisions among the people, Congress MLA Priyank Kharge urged Chief Minister Basavaraj Bommai not to play with the future of children by distorting history in school text books.

Addressing a press meet at Congress Bhavan near City Railway Station here on Saturday, Priyank Kharge, son of veteran Congress leader Mallikarjun Kharge, said that the Government, instead of getting itself mired in text book revision, should take immediate measures for timely distribution of text books, school uniforms and stationeries.

Maintaining that CM Bommai is trying to appease the BJP top brass for saving his post, he demanded the Government to withdraw all text books revised by Rohit Chakrathirtha-headed Committee, in the better interests and future of children.

Stating that BJP leaders can bring out a separate book on the RSS if they are so much fond of the Hindu outfit, Priyank said that at the same time, the book should contain facts and truths.

Questioning the CM on why he was playing to the tunes of RSS, he wondered why the CM, who has an intellectual mindset, had become so helpless.

Urging the Government to supply the previous non-revised text books, he contended that the Congress was not against periodic revision. But the Congress wants the text books to be reviewed by a Committee of subject experts, he added.

Charging the BJP of corrupting young minds by telling lies in text books, he suspected that the BJP is doing this to consolidate its cadre and base through text book revision exercise.

Asserting that the people know who are patriots and who are not, he said that the Congress is severely opposed for advocating ‘Manusmriti.’

The Government should not make any attempt to scuttle the scientific mindset among children, he added. Highlighting the achievements of the Congress, Priyank appealed the voters to elect Madhu G. Madegowda, the party candidate for the Legislative Council polls from South Graduates Constituency.

KPCC Spokesperson M. Lakshmana, who also addressed the press meet, challenged MP Pratap Simha to fix a date before June 24 for a debate on the contributions of former Chief Minister Siddharamaiah to Mysuru.

He also blamed the JD(S) for the victory of the third candidate of the BJP in the just held Rajya Sabha polls.