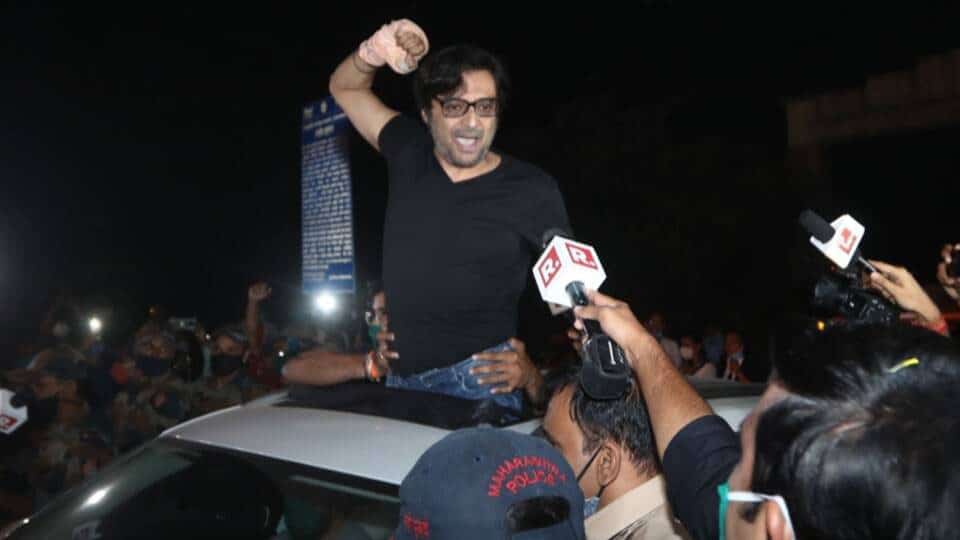 Three days ago, Arnab Goswami, the Editor-in-Chief of Republic TV walked out of jail. The telecast was theatrical with exhilarating music playing in the background as Arnab popped out of his car’s sunroof to deliver a freedom fighter style “Bharat Mata Ki Jai.”

Many of my journalist friends were emotional, even those who detest Arnab’s style of journalism saw it as a victory for free speech and civil liberty, which it was.

Unfortunately, many in the “liberal” media did not see it as such and hardly gave it any coverage which is ironic considering “individual rights” and “civil liberties”  are the corner stone of their ideology!

For now, Arnab can breathe easy. But breathing easy is not easy for a person like Arnab. It is obvious he has discovered that “argument” sells better than “debate” and this style of journalism is why many people like him and many dislike him. That is why some people were happy when he was arrested, as they said, “Now he’ll know how Rhea Chakraborty felt.”

But what we must consider is this.  Arnab did not send Rhea to jail, the Narcotics Control Bureau (NCB) did. It is the job of the Government agency to follow facts and not act on some news anchor’s diatribe.

This reminds us of Sunetra Choudhury’s book  Behind Bars where she interviews famous people in jail, in which Peter Mukerjea who was arrested in the “Sheena Bora case” says,  “Thanks to Arnab and his decibel levels, he’s put me in here.” Again Arnab did not put him in jail, the authorities did.

All media personnel, more so TV news anchors, harbour an inherent desire to bring change in society, to leave a mark or spearhead a campaign for justice. So may be Arnab,  with Sushant Singh Rajput story was trying to pull off what NDTV did with Jessica Lal’s murder, which is galvanising public opinion for what he thought was injustice.

Many may recall how NDTV successfully led a “Justice for Jessica” campaign back in 2006 after Manu Sharma, the accused, was let off by a judge because of fabricated ballistic reports. That campaign put Manu Sharma in jail. So did Arnab think he had a similar case on his hands? And did the Union Government exploit his enthusiasm to settle their own personal score with Uddhav Thackeray?

Whatever it may be, Arnab got it wrong. He approached the whole case without empathy for Rhea Chakraborty and her old father. In the end, ironically,  to the delight of some, “Justice for Sushant Singh Rajput” ended up being “Justice for Arnab.”

Of course, for long now Arnab has brought more ‘fight’ to an issue than ‘light’. That is his style. I remember in 2016 when Arnab Goswami was with Times Now, anchoring a show called News Hour, we jokingly used to call it the “Noise Hour”. This show was to journalism what WWF is to wrestling — wrestle to entertain, don’t worry about rules and techniques. And what was the effect? Today there is more viewership for WWF than for professional wrestling.

People who dislike Arnab’s style may say he turned TV debate into a shouting match and turned news anchoring into bullying, but they must also realise that he serves an important purpose for the frustrated Indian middle class, who live vicariously through him every night. How?

For over a decade now Arnab has used his right to freedom of speech, to screech and verbally gouge the people we hate — politicians. Could anyone ever address Uddhav Thackeray in the singular as “Uddhav” and dare him in his own State when he is in power? No way. But Arnab did. And we liked it.

For long Arnab scolded, attacked and belittled politicians and the entitled on our behalf and it felt good. We liked it.

For a while now, like a verbal chiropractor he may have twisted facts, pulled apart objectivity, stretched the truth and given us, many English-speaking middle class Indians, a sense of vengeance against the ruling class. We liked it.

Yes, for many frustrated English-speaking, arm chair warriors Arnab is their “Knight in Shouting Armour” but we need him. We need a watchdog that barks, yes at times it barks at the watchman instead of the thief, but at least it barks unlike the many others who have just meowed for decades.

But the question we have to ask is, would Arnab have the guts to scream “Uddhav” if he did not have the support of the BJP? And would he have the same daring to scream “Amit”  if it comes to it? We doubt it. Just like how the Left-leaning media could never dare scream “Sonia.”

Also what the Arnab arrest exposes is that media companies have chosen sides and they have done so at the cost of media freedom. By not supporting or even covering the Arnab arrest they fell into the same hole as the Government agencies — they focused on Arnab’s noise, got stuck in their own prejudice that they forgot it’s not about Arnab or just Republic Media’s freedom but about all media freedom.

While Arnab is berated by some quarters for being a partisan provocateur, aren’t others doing the same in a subtler manner? Yes, Arnab has been accused of weaponising media platform by shooting his mouth off, but haven’t others used their media platform to slow poison and tilt public opinion in favour of their patrons for decades?

This appeasement journalism, this partisan journalism is what Governments have taken advantage of and turned watchdogs into lapdogs.

For now, let us hope that going forward Arnab  will pick up on more pressing issues and shower us with facts along with his sound so our democracy can remain in bloom, because as poet Rumi said, “It is Rain that grow flowers, not Thunder.”

P.S.: In this whole Arnab saga, an astonishing statement was made by the BJP Spokesperson Sambit Patra, who said, “From now on, I will call Arnab the Nelson Mandela of the Indian Media.” Really! Arnab’s eight day jail stay is worthy of being compared to Nelosn Mandela’s 27 years                              of imprisonment!

Hell, it’s not even comparable to veteran Journalist late Kuldip Nayar’s three-month jail stint for protesting against Indira Gandhi-imposed Emergency. The veteran journalist not only went to jail proudly without a protest when the Police came to pick him up in the middle of the night but also had the audacity to push the van that was taking him to Tihar Jail as it had starting trouble!

One wonders, are only Bollywood stars using mind-numbing drugs? Or can people get high on sycophancy too?

Guess for now we all need to inhale something deeply, even if it is only fresh air, to calm down, so we can think before we speak.

Arnab Goswami In Black & White Vikram Muthanna
For a Safe Deepavali
Aprenticeship in Journalism for SC,STs; financial aid for Churches