Home » Columns » Abracadabra By K. B. Ganapathy » The misery of losing and the miracle of finding ! -1 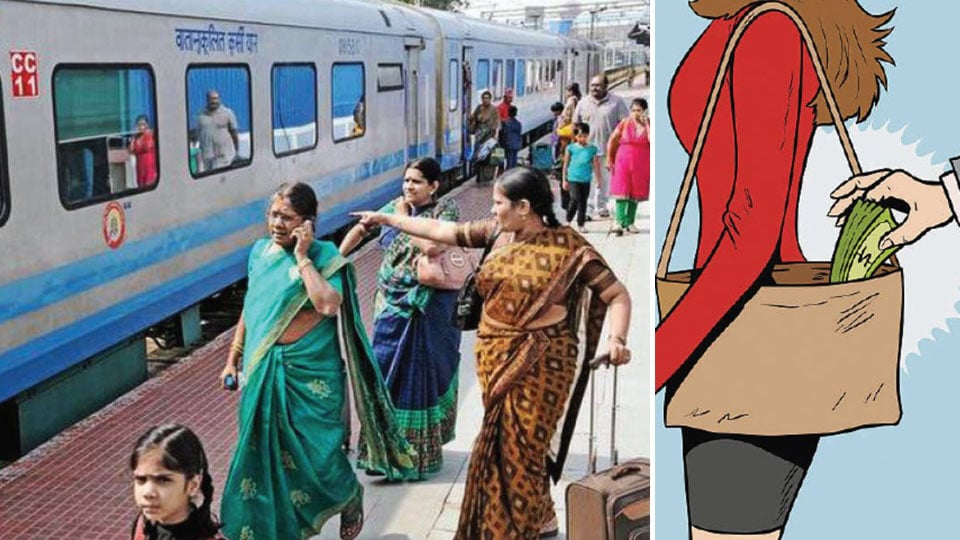 The misery of losing and the miracle of finding ! -1

On April 15, 2018, The Hindu had published an article titled ‘Miracles, they do happen’ by one Jayanthi Chandrasekharan about the purse being stolen from her hand bag at the Chennai Railway Station. She was to travel in the Shatabdi Express leaving in the evening. It was narrated as a real-life incident and I was galvanised to the report as I too had a similar experience in 1992 at Bengaluru Railway Station when I was travelling in Brindavan Express to Chennai.

Let me briefly narrate Jayanthi Chandrasekharan’s experience before I reproduce my experience from my book titled “America – An Area of Light.”

On reaching the platform I pulled out my mobile phone from the hand bag to check the compartment number in the digital ticket. As I was walking towards the compartment, clutching my phone, I felt my hand bag had become lighter. Sure enough, the purse was gone.

I was stunned, and went blank for a few moments – the purse contained not only money but credit cards, ID cards, the PAN card and driver’s licence. I gathered my wits and approached a Travelling Ticket Examiner who was on the platform and told him… and he told me to board the train; he will alert his colleague who is in charge of my compartment. With a heavy heart I settled down in my seat and called my husband and told him about the mishap and asked him to block all the credit cards.

Meanwhile, the TTE for the compartment arrived. I showed him my ticket in the mobile and told him about losing my purse and so not being in a position to produce any ID. He said his senior had mentioned about my predicament.

Then the most curious thing happened. He enquired if my purse is pink in colour and longish. I was taken aback and responded in the affirmative. “Ma’am, just now in C5 compartment an elderly couple showed me this purse they found under their seat. Let’s go there and check if it’s yours,” he said.

I jumped up from my seat, and with my heart pounding, followed him to C5. Lo and behold, it was my purse, and I immediately produced my ID card from it. All the money was missing but the cards were intact.

The elderly couple that found the purse had reported it to two TTEs who were passing by. They were safe-keeping the purse for the owner to claim. Indeed, the thief was a ‘compassionate’ one and threw the purse inside the rail compartment and not on the tracks. I had tears in my eyes and gratitude in my heart. Analysing this incident later, I consider that losing the purse on the platform and getting it back in the running train within an hour is nothing short of a miracle.

Now this was my experience in 1992 that I mentioned earlier as published in the book:

Then was the ball set to roll towards realising my dream of going to America which later had almost become a nightmare but for a miracle. Yes, miracle.

The plan was for the whole family — wife, two sons. Spending so much on travel, long stay being taken care of by my sister-in-law, I decided we also break our journey at London and have a feel of the Raj land and the people who ruled us for nearly two hundred years. That was also my dreamland where I could have gone once if I wanted.

Taking our passports we took the Brindavan Express train to Madras to get our visa for America and England from the respective Consulate-Generals where our personal appearance was necessary being the first time visitors to US and UK. I had put the passports, the most precious possession and document, in an imported leather bag, zipped it and held it close to my chest, not trusting my children or wife to be careful with it. There was a mad rush at the Station and our air-conditioned compartment was quite a distance from where we were waiting and even after reaching there, our names were not found in the reservation slip pasted on the door. Of course, we sought the Ticket Collector’s help and were finally able to find our seats, struggling with the baggage. We heaved a sigh of relief.

The train was moving in a slow pace as it pulled out of the Station. We were not grouped together — an unimaginative way of allotting reserved seats to a family. I with my elder son sat together and my wife and the little fellow occupied seats in the adjacent bay. More than an hour had passed and the train must have covered a distance of about 100 km when my wife, as if to get over the ennui or to break this temporary separation from her husband (I don’t know which of the two) came over and sat by my side as there was enough room by then.

She opened the conversation. An old lady sitting by her side was complaining that the Railway Station was full of pick-pockets and she was lucky to escape from the hands of this nimble fingered gentry who had zipped open her handbag while clambering up the compartment. Since she was alert she screamed and swore at the culprit who disappeared in the thronging crowd without completing the other half of his operation. “Hm, lucky old lady,” I muttered and reached out to my bag lying aside telling my wife, “Now let me look at the zip of my bag, who knows …”

Yes, nobody knows. The zip I had so carefully and consciously pulled to secure the valuable contents — four passports wrapped together in an envelope and a wad of ten thousand rupees — had been zipped open. I was speechless, breathless.

Quickly I ferreted into the bag in all its three compartments only to find the bundle of money but not the bundle of passports. It was gone. I broke into a cold sweat. I was confused, I was nervous, and even panicky. Tongue went dry. What good was our journey without the passports? My wife, used to my way of handling matters such as this, looked rather sanguine. “You always mess up things. If the money could be there, the passport too should be somewhere there inside, look properly or give it to me…”

I gave it to her. Rather she snatched it from me. Her face turned pale too. By then our children also realised the gravity of our search and plight. Humbly we looked at each other. Meek looks of helplessness.

I was sweating even though the compartment was air-conditioned. The train appeared to move faster and I hated it. My wife caressingly wiped the sweat off my face with her hand hoping perhaps to soothe my tensed emotions. I thought it was the end of our American dream.