Home » Columns » Abracadabra By K. B. Ganapathy » The Public and The Police 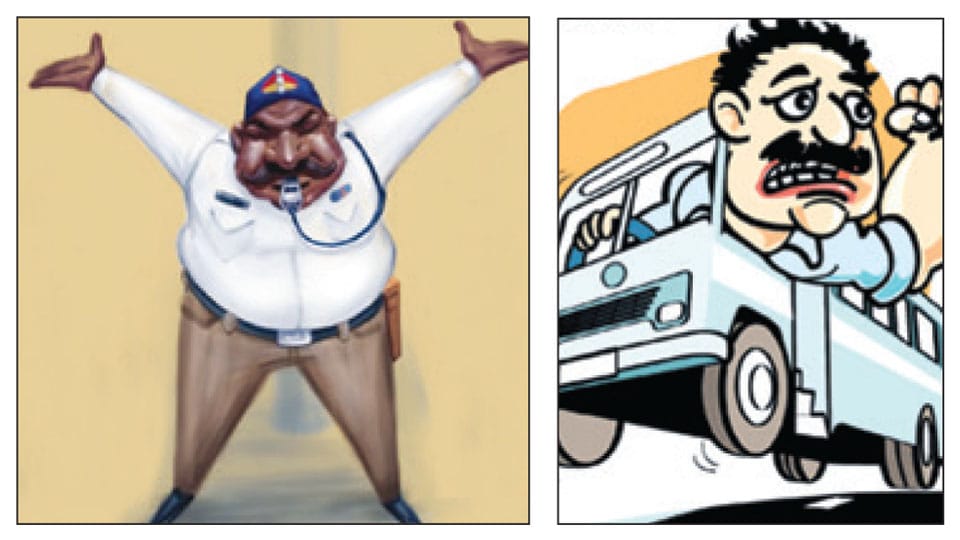 The Public and The Police

Importance of reading the written law and rules. But Police have greater responsibility.

A couple of days back a friend of mine in his eighties came to my office with a bulky file requesting me to publish a report on a subject related to Police or to talk to the Commissioner of Police.

A tall order I thought, but a good friend can order, for he will never mislead. I know him for the past 35 years as a private bus operator. He is a very strict law-abiding person. No wonder his words are taken seriously not only by the office-bearers of a couple of prestigious Social and Sports Clubs of city but also by the Bus Operators Association.

His problem was that whenever his bus drivers violate rules, the Police issue notice to him as a owner. As a law-abiding citizen he promptly sends the same recalcitrant driver to the Traffic Police Station to pay the fine. Strangely, even illogically and illegally, the Police Officer collects the penalty from the driver. The ‘complication here’ for the owner of the bus is that the “Police Station does not issue the fine paid chalan in the name of the driver but in the name of the registered owner of the vehicle.” In this case my friend T. Sathyanarayan who does not drive heavy vehicles nor does he have a licence for it.

The paid driver goes scot-free (for his offence of over-speeding) while the registered owner of the vehicle (who is an old man and does not drive the bus) is penalised with a “bad record.” Here is the critical point he had made in his letter dated 12.6.2016 in this regard to the Commissioner of Police, Mysore City:

“Because such a system exists, the employed driver of the public vehicle will continue to violate the traffic rules with impunity, with no fear of law.”

His final request to the Commissioner of Police: “Notice may be given to the registered owner but insist the fine paid chalan should be issued in the name of the driver.”

Apparently this letter to the Commissioner of Police went without response till 24.3.2017.

Again the bus driver was caught violating the traffic rule and a notice from the Police dated 27.1.2017 was sent to bus owner T. Sathyanarayan.

I am herewith enclosing a copy of the letter sent to you by me on 12.06.2016 which speaks for itself.

Again, I have received a notice dated 27th Jan. 2017 from your office for over-speeding by the same driver (4th time) who earlier also committed the same offence three times, but the receipt issued to me states that the owner of the bus is the violator, i.e., myself.

I had sent the driver to the Siddarthanagar PS along with his driving licence to pay the fine amount, but it appears to me that the officer-in-charge does not seem to verify the DL before accepting the fine amount. The receipt is issued in the vehicle registered owner’s name and not in the violator’s name.

Therefore, I request you to kindly make an enquiry and instruct all the PS concerned to issue the receipts only in the violator’s name and not in the vehicle owner’s name.

I would be grateful to receive a reply on the action taken from your side.”

However, for the letter of 12.6.2016 sent to the Commissioner, Sathyanarayan receives a nice letter in Kannada titled “Himbaraha” (may mean “response” or “notes”) from the Siddarthanagar Traffic Police dated 24.3.2017.

This letter says that it is true the fine for violation of traffic rules is collected from the owner only when the owner is also the driver. But the notice is sent to the owner whose address is provided from the RTO through its ‘Electronic Division.’

Surprisingly, the letter does not answer the fundamental question of T. Sathyanarayan. This is how 95% of the government officers work. Which is why common man does not get justice in the First Court of Justice — the Government Office — as Bhure Lal, IAS, who worked with the former Prime Minister V.P. Singh had said.

Curiously the cause for Sathyanarayan, who might have become immune to paying fines of this kind, to write this letter to the Commissioner of Police was a news item in The New Indian Express dated 11.6.2016 with the heading “Traffic violators beware, cops to knock your door.” “Those violating rules more than 20 times will be in trouble.” If it was not for this news, T. Sathyanarayan would have continued to pay the fine and be happy, I suppose.

Be that as it may, when I engaged him with some questions and both of us were unable to decide whether there was any way the Police would know the address of the culprit-driver, I asked for the original notice from the Police. It was an Inland letter with small printed text.

And lo and behold! The truth of the matter was we were able to answer all our Yaksha Prashnas and remove the   Gordian knot like Alexander     the Great did!

It was printed, “By virtue of powers conferred under Section 133 of M.V. Act  1988, this notice is being issued to you, to provide information regarding the name, address and the Driving Licence particulars of the person who was driving the said vehicle when the said offence is alleged to have been committed within 7 days from the date of this notice,” etc., etc.

This information is given in both English and Kannada. Sadly and as a reflection on our inefficiency or indifference, both on the part of  our citizens and the Police officers, there is no effort on their part to read the notice properly and act accordingly. This way one could be a good citizen and also a good Police Officer.

‘Ignorance of law is no excuse’ is a credo under jurisprudence. Hence T. Sathyanarayan cannot find excuse and blame the Police.

At least the Traffic Police Officer of Siddarthanagar Police Station should have replied to the letter of Sathyanarayan drawing his attention to this printed information about Section 133 of M.V. Act, 1988, instead of writing a rambling letter. And the problem of both Sathyanarayan and the Police, created due to either ignorance or casualness on the part of the Police, would not have come to my Star of Mysore desk.

The American President   Harry S. Truman once famously said, “The buck stops here, on my desk.” I  wish the buck here too had stopped on the desk of the Commissioner of Police or at least the table of Siddarthanagar Traffic Police Station. Jai Hind !