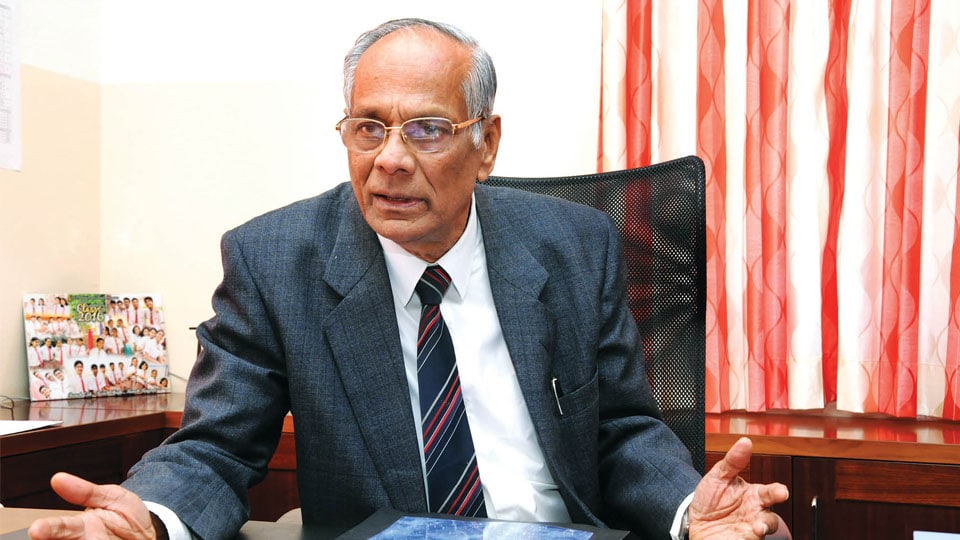 The word education encompasses many things apart from just acquisition of knowledge, skills, values, beliefs and habits. This is where the importance of school education comes in because all the things learnt at that stage will probably shape one’s life. Hence, the role of an educationist becomes very important as only a true educationist understands all the dimensions of education system. Here is one such person amidst us,  Dr. K.P. Gopalkrishna, Chairman, Founder and Principal, TISB (The International School Bangalore), NAFL (National Academy For Learning) and NPS (National Public School) Group of Institutions, India and Singapore.

Star of Mysore Features Editor N. Niranjan Nikam met the octogenarian  Educationist, accompanied by his daughter Dr. Bindu Hari, Vice-Chairperson of NPS Institutions, at the swanky, fully-equipped, sparklingly clean NPS International Mysore in Vijayanagar 4th Stage, where the razor-sharp, highly articulate mind, shared a range of views on the school system, RTE, teachers, language policy and finally revealed at the end that he started the first school at the age of 23. Excerpts… —Editor

Star of Mysore (SOM): It is 60 years since you founded the National Public School (NPS) in Rajajinagar, Bengaluru. It is a great milestone. How do you feel looking back?

K.P. Gopalkrishna: I am very happy; I have contributed a lot for over 40,000 to 50,000 students and to the educational standard. I strongly believe in academic excellence, character-building, entrepreneurship and leadership. These are the basic factors which I had in my mind when I set up these educational institutions. I think I have succeeded by 60 per cent. When I evaluate myself, I find that 60 to 70 per cent of the students today are abroad working in big companies and that is a big achievement. But the 40 per cent who are you here now, many of them, have returned after our ex-Prime Minister P.V. Narasimha Rao and the then Finance Minister Dr. Manmohan Singh opened our economy to everyone to come and set up their own companies and MNCs. That made a change in the whole outlook of India. And probably today our IT industry is the mainstay to bring huge substantial income to the Government of India.

We have a school called TISB, the first international school with IB (International Baccalaureate) curriculum. When I started this in the year 2000, everybody looked at me and asked what this IB is? I had to go to the Government, politicians and Secretaries and explain to them and today we have about 138 IB schools. Therefore, I had sprinkled the idea of international, global curriculum in India. I am very happy about it.

But of late, I am sad to say that the countries where we are getting students from like Korea, Hong Kong, UK and many other parts, they are sending out messages not to send their girls to study because India is a rape country. This has come in the mind of everybody. The media should be a bit more positive in projecting such issues, like media of other countries. They don’t write about all these things even though, probably, it is happening there more than in our country.

SOM: There was a time when there were hardly any schools except the schools started by Christian institutions and Government schools. Today every street has a school whether there is infrastructure or not. As an educationist what is your view on this?

K.P. Gopalkrishna: My view about education is, it is the failure of government to give a standard education that this has come up. The legacy left by the British period and one of the legacies is which Lord Macaulay has given us and that is being continued even today. India never thought of standardising the education at school-level but they have these policies by the national government when NCERT (National Council for Education Research and Training) was formed and they have been coming out with national policy on education. That is also not very effective.  In India, education is a subject in the concurrent list. Since it is in the concurrent list, State also legislates what it wants and Government of India, our Parliament has become very passive about it. This conflict is gaining momentum and it is destroying our education system.

Then it is the language policy of various States, which is coming in the way of our education system. But in spite of that you will find large number of Indians went abroad to United States of America or United Kingdom and became highly successful. Out of 500 or 600 listed companies, 300 to 400 are run by Indians in the world. When you look at this, you can’t say that Indian education is bad. If you take NASA, 25 to 30 per cent of scientists working there are from India and some of the divisions are headed by Indians.

SOM: Yours is only one of the two schools in the country granted full autonomy by the Central Board of Secondary Education (CBSE). When did you get this autonomy? How much of a difference has it made?

K.P. Gopalkrishna: The autonomy in Rajajinagar school was granted in 1986 because of our approach towards the curriculum. This autonomy has helped the youngsters look for a better standard and definitely other schools also looked at this. We used to have our own curriculum, our own certification and it will be sent to CBSE and they will accept it. But even after 32 years there is not even a single incident of negativity in my autonomy school system. But we do not know why CBSE has withdrawn the autonomy for 92 schools in India without giving any kind of notice or prior information.

K.P. Gopalkrishna: Yes, they have withdrawn permanent affiliation even though autonomy continues. Now we have asked for a clarification. Thus they are doing harm as the good system we have been practicing is going back. We do not know why it happened. CBSE, right from its inception in 1959-60 when our school also was started, was headed by educationists, who had academic experience. But what is happening today is the bureaucrats (Secretaries) have been appointed as Chief Executives and they have no idea of what education is. Therefore, the system has become completely controlled. There is no autonomy for the institutions and since we have lost it slowly it will degrade and institutions cannot progress, whereas in America all schools are autonomous. In other countries, there are government-public schools but they encourage private schools. Even today, in countries like Japan, China, UK, they are requesting Indian entrepreneurs to go and set up schools there.

Our NPS is the first CBSE affiliated school in India at a time when there were no schools. I had to educate all the authorities what is CBSE and all kinds of things. Now we have more than 968 CBSE schools in India. But due to the dual control by State and Centre that CBSE has introduced, it has again started limping which has come in the progress of education.

SOM: Having started school education, have you considered college education at all?

K.P. Gopalkrishna: I thought of having higher education but I have miserably failed as I was not able to fulfill the many conditions laid down by various agencies. But I supported to set up CMR University and Global Education. I am instrumental in setting up these two institutions. Apart from that I have been associated with many other people to start but I could not do it myself to start an engineering or medical college at that time because of the stiff rules.