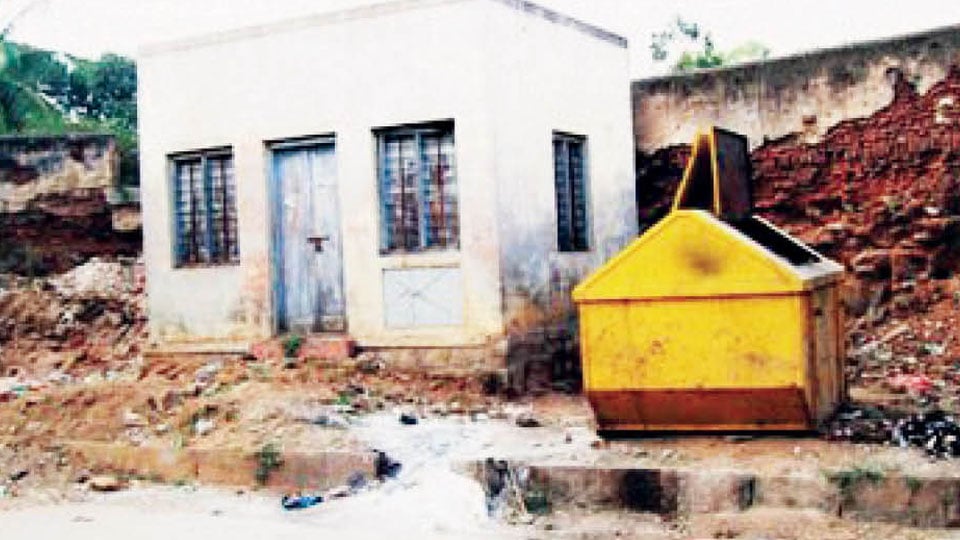 This Reading Room crying for attention

Mysore/Mysuru: Here is a classic example of how the authorities have shown apathy in maintaining an ‘existing’ monumental 36-year-old Reading Room situated near the junction of Pulikeshi Road – Ashoka Road.  The broken/cracked grey marble plaque still exists and it says: Reading Room was inaugurated on 2.9.1985 by the then Mayor Satyanarayana and in the presence of Deputy Mayor K. Gopalaswamy, luminaries, and dignitaries of Mysore City.

But, it has been locked up  ever since  and is at present a garbage dump and its surrounding, a toilet for people; its roof is collapsed, windows/door are missing and is in a pathetic condition.  It is located near some of the oldest slum areas of Mysuru — Lashkar Mohalla, Kailasapuram, Manjunathapura, Veeranagere, Gumchi.

The Reading Room could have certainly inculcated a habit of reading/improving literacy among slum dwellers, had it been maintained properly by ensuring regular supply of daily newspapers of different languages for catering to the different class/vernacular readers and comic books etc., for attracting children. I appeal to MCC Commissioner,  Ministers, Corporators, Library Department officials to visit this slum area Reading Room in Lashkar Mohalla and take action for improving the dilapidated building at the earliest.

There are many public libraries in extensions and an inspection may be conducted to find out whether they are worthy of visit by people.