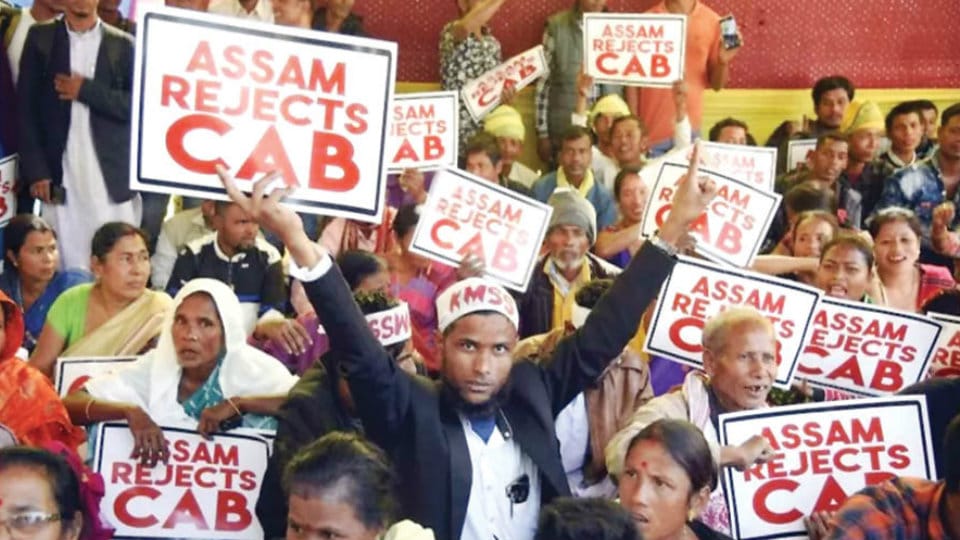 The Citizenship Act of 1955 has been amended again and passed. This Act has been amended five times before, thrice by the Congress Government and twice by the BJP. The Bill was amended in 1986, 1992, 2003, 2005 and 2015. In the recent amendment, illegal Muslim immigrants have been left out from being legalised as Indian citizens.

The new amendment to this Bill states that Indian Citizenship will be given to all illegal immigrants of Hindu, Sikh, Buddhist, Jain, Parsi and Christian faiths hailing from Afghanistan, Bangladesh and Pakistan, who entered India to escape ‘religious persecution.’ No, illegal Muslims cannot avail this provision but they can apply separately for asylum and citizenship like Bangladeshi author Taslima Nasreen and Pakistani Music composer Adnan Sami did.

As this Bill was passed, a perception was created that our nation was in chaos.  Obviously, a nation will seem to be in a state of chaos when political parties, sniffing an “appeasement” opportunity in Citizenship Amendment Bill (CAB), say it is anti-Indian Muslim who is an Indian citizen.

The Opposition parties and other Civil Right Groups are opposing the CAB on the ground that it discriminates against Muslims. Yes, it does discriminate against “illegal” Muslim immigrants not Indian Muslims. This Government clearly says this amendment is for illegal immigrants who have been “persecuted” for their religious beliefs in the three neighbouring Muslim nations. “Persecuted for their religious beliefs” is the operative phrase.

It may very well be that this Government’s logic is that there are over 50 majority Muslim countries in the world. Out of this 7 have adopted Islam as the ideological foundation of their State and Constitution, another 21 have endorsed Islam as their State religion, the three countries named in the Bill are among this 21. So it is obvious that BJP feels if a Muslim wants to seek refuge from “religious” persecution from a nation ruled by their own faith, then they have 49 other Muslim countries to choose from to relocate.

But then so do Christians and Buddhists, they have nations where they are a majority too. That is why it seems like the other religions were added more to give a “secular” touch.

Also the BJP may be considering the persecution of Muslims in Muslim countries as an internal matter of Islam. In the sense that if a Shia Muslim is persecuted in a Sunni majority Muslim nation, then they can move to Shia majority nation instead of India.

One gets a sense that this Government feels, while Muslims, Christians and even Buddhists have many nations where they are a majority and will be accepted, where will Hindus go? Obviously India. After all, India is the only majority Hindu nation in the world along with Nepal. So may be for BJP, India is to Hindus what Israel is to Jews. The last safe haven.

This does not mean India will one day become only for Hindus. It will never happen. The very fact that a  party perceived as being minority appeasing in nature ruled this nation of Hindu majority for half a century is proof of that and with that comes the much spoken about Article 14 in the Constitution.

The members of the Opposition and concerned civil society activists say leaving out illegal Muslims is unconstitutional under Article 14 which states:  “The State shall not deny to any person equality before the law or the equal protection of the laws within the territory of India.” The equal protection of law means the State will not frame laws or rules that discriminate between two persons. If this is the case, where are these “secular voices” when Muslims in India operate under a separate law? Is this not contrary to Article 14 and also corrosive to the homogeneity of a nation? If we are one nation, should we all not be ruled by one law?

Now, let’s not fool ourselves. The BJP brought this amendment because their calculation went wrong with National Register of Citizens (NRC). Because when former PM Dr. Manmohan Singh had suggested the same provision in CAB with illegal Muslims also included the BJP then had objected. Probably thinking that there were too many illegal Muslim immigrants in the North East. But when the NRC list was finalised they realised it was not Muslims but nearly 19 lakh Bangladeshi Hindus who were illegal immigrants and now this CAB amendment fixes this problem by bringing about their legitimacy.

The CAB implementation will indeed change the demography of the North East and this is what the protest in the North East is all about. They are not protesting because “illegal Muslims” were left out of the Bill, they are protesting because they don’t want their hills to turn into, as one student leader put it, “dumping ground for immigrants who are culturally different.”

They fear a repeat of what happened in Tripura where for decades illegal immigration has taken place and today the indigenous people are a minority in their own land. This has affected their political representation and with that their social, political and economic relevance. They have become irrelevant in their own land.

READ ALSO  We need Dasara & our DC needs a leg-up

Indeed the protestors are right in saying they should not be the dumping ground for immigrants. Herein lies the BJP’s failure. They failed to prepare for the outcome of CAB, they did not engage the leaders who have for decades been against legalising immigrants in their land, they failed to take an otherwise helpful Bangladesh Government into confidence. In the end there is misinformation and no clarity in the solution for North East people.

This North East protest throws up another Constitutional issue, that of Article 19. This Article states it is the fundamental right of every Indian to move freely throughout the territory of India and reside, settle or carry on any occupation.

But even today an Indian citizen has to obtain a document called Inner Line Permit to enter certain North Eastern States, a kind of Visa to enter another State within our own country.  So it is ironic that while North East States don’t want other Indians coming to their State, they travel all across India to make a career.

This is exactly why even people from Kodagu are asking for this special status. Kodavas are tribals, they have a unique culture unlike any other people around them, they live in a unique geographic area and their demography is threatened by immigration from Kerala. So why is BJP not making Kodagu special? Are only border States unique, not so much because of their culture but because of national security? We are sure in time many other communities will claim they are unique and want protectionist policies. Makes one wonder when will Indians become Indians first and Indians last as Dr. B.R. Ambedkar hoped?

For now, CAB has nothing to do with Muslims in India. It has to do with providing a safe haven for persecuted Hindus from the three Muslim countries. And the North East alone should not have to bear the burden of immigration — BJP has to give a solution, not just forced implementation.