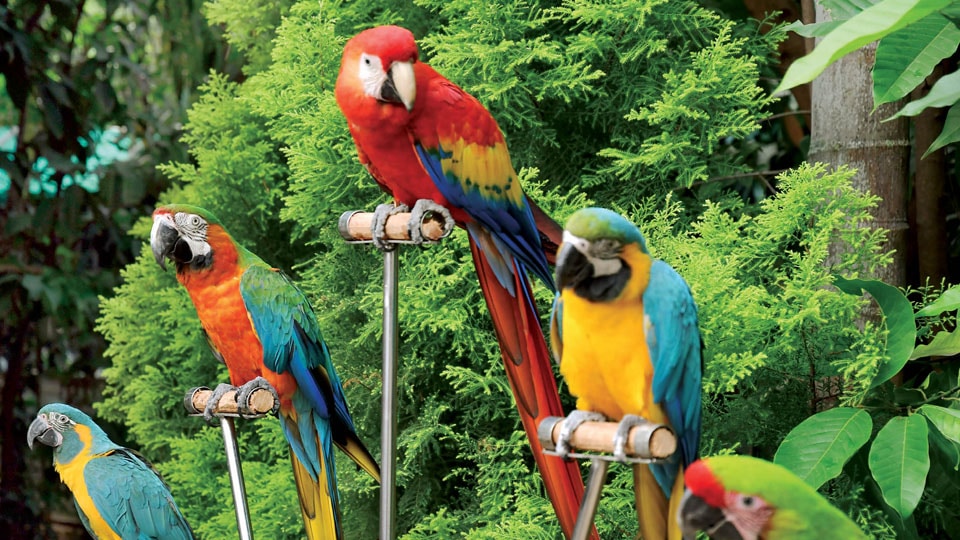 Birds of a Feather

India is home to many exotic species of birds and animals but did you know that the country also has set a record for the ‘Most bird species in an aviary’? Yes, the Guinness Book of World Records has confirmed that the beautiful Shukavana at Avadhoota Datta Peetham below the Chamundi Hill in Mysuru has the most kinds of birds in a garden.

This year, as part of Winter Festival in Mysuru, Mysuru Bird Fest 2019 will be held on Dec. 28 and 29 where participants will be taken on field visits at bird sites and there will be lectures by reputed bird scientists. In the light of Bird Fest, this Weekend Star Supplement features Shukavana, a Sunshine Corner and a colourful place that is creating an uplifting environment of happiness and fun.

Mysuru is a treasure trove for tourists. Apart from popular attractions, there are many hidden, unexplored and interesting places to visit in and around the city.

One such distinctive draw is Shukavana, a rehabilitation centre for parrots housed inside the sprawling premises of Avadhoota Datta Peetham’s Sri Ganapathy Sachchidananda Ashrama at the foot of Chamundi Hill.

The screeching, squawking sound made by colourful exotic species of parrots welcome visitors into this fantasy land of winged wonders. Shukavana is a rehabilitation centre for parrots with a dedicated bird hospital — named ‘Parivana’.

This provides veterinary care and shelter to injured abandoned and ailing birds. The man behind this initiative is Sri Ganapathy Sachchidananda Swamiji a spiritual teacher, a healer, an educationist who is also renowned for his meditation music.

Sri Swamiji established Shukavana in 2012 and it is named after sage Shuka considering his contributions towards teaching righteous values.

This incident moved Swamiji to set up Parrot Paradise

There is an interesting incident which dates back to 25 years that paved way for the founding of this ‘parrot paradise’. It is said that when Sri Ganapathy Sachchidananda Swamiji was on a spiritual tour to South America and was visiting a waterfall in Venezuela where he accidentally fell into a 100-ft deep lake from the boat and only because a flock of macaws flew over him the life-guards could notice the drowning Swamiji and rescue him. After returning to India, Swamiji introspected about the incident and decided to start a rehabilitation centre for parrots and Shukavana took shape.

A walk inside the aviary spread across one-and-a-half-acre area is a visual treat for every bird lover. This free flight walk-in aviary houses more than 3,000 colourful birds of 425 different species from all around the world and it has made it to the Guinness World Records for housing the largest number of bird species in an aviary.

Swamiji, who is the founder of Avadhoota Datta Peetham Ashram, has always been passionate about birds. In the initial stages when some of his devotees and the owners of the birds began to bring in sick and injured parrots to Swamiji from different corners of the country, a small aviary was constructed to house about 25 injured birds. They were given treatment and over the course of time, the number grew from few dozens to hundreds and today there are over 3,000 exotic birds from all over the world. Some of these birds have been rescued by his followers and brought to the rehabilitation centre, others were found sick and abandoned.

Shelter to injured and abandoned birds

Shukavana today has been successful in giving treatment and shelter to injured and abandoned birds. They are looked after by a professional team of volunteers and a dedicated medical staff.

A pair of African Grey Parrots was donated to Shukavana by Keshav Jhunjhunwala, a businessman from Kolkata as he was unable to take care of his parrots because of his workload and business schedules. Keshav Jhunjhunwala opines, “There is no better place than Shukavana for my parrots I am sure that they will be safe and looked after with utmost care here.”

The striking 50m-high free-flight, one-acre aviary is built in a well thought about manner where the birds have enough freedom to fly about with trees and cages all around. Earlier they were always free to fly about but since visitors were scared of some birds that led them to getting stressed, they are restricted to the cages now.

Natural habitat along with healthy environs

Considering the variety of species native to different countries, living habits, dietary requirements, birds are provided with matchless environment encompassed with natural habitat along with healthy safe and clean conditions to enable the birds to lead a healthy life.

Sri Swamiji believes that birds are vital to the existence of other species and their diminishing number in recent years has been a cause for alarm and a call for action. Through this initiative he hopes to inform and sensitise and grow a sense of respect and friendliness amongst the general public towards these avian species.

Parrots have always been considered sacred in India and because of their ability to mimic human speech they played a pivotal role in the Vedas and the Puranas. Swamiji not only gives these winged beauties personal attention but also trains them.

Bird brains are compact, but unlike those of humans, are fully utilised. Hence they are very intelligent and are able to imitate human voices. They are monogamous and normally are so attached to their partners that their loss makes them depressed.

Amazon Parrots are known for their mimicking capabilities these human-friendly birds are trained accordingly. They can mimic words like Rama, Jaya Guru, Datta, Appaji, hello, how are you, good morning etc, some can even recite phrases and can sing a few of Swamiji’s bhajans. Swamiji has even named some of these parrots as Bittu, Ranga, Indira, Appu, Rocky, and Shrona to name a few.

Sri Swamiji argues that parrots have the ability to travel into invisible spiritual dimensions and to convey essential nourishment to departed human souls. “Parrots have capabilities not only for mimicking human speech and songs, but are perhaps the vital source of man’s initial foray into areas of communication,” the Swamiji says.

Shukavana is a distinctive aviary where one gets the most astonishing opportunity of being in the divine presence of the living, breathing deity that presides over one’s own zodiac sign.

A parrot that represents one’s planet and birth date, parrots stand as a symbol for each day of the month as well they have a specific spiritual connection with the nine planets, twelve Zodiac signs the numerals of the dates in each month and the Seven musical notes.

The birds are left out freely in the Aviary daily from 6 am to 9 am for them to fly around inside the aviary and there are 15 women employees to take care of the feeding of these feathered beauties.

Being an asset to Mysore, Shukavana is also partnered with National Geographic project and other reputed organisations that would work to protect birds and their habitat.

The aviary offers the visitors a chance to feed the birds and click pictures with these beauties. Professional photographer is assigned for the job by the Ashram.  “Clicking pictures of the birds by visitors is not allowed as the mobile radiation is harmful for the birds so we have hired a photographer to do the job and charge a nominal fee for the photo” says a staff.

Savita a local school teacher who was spotted at Shukavana with her students opines, “Our children were happy to see different kinds of exotic species of parrots and other birds with vibrant colours, they read all the boards and learnt a lot of facts about birds and gathered a lot of information, it was fun learning.”

“I enjoyed feeding the parrots which sat on my head and shoulders. It was a unique experience” says Shravan, a localite who was seen with the birds. About 1,000 people visit the park on the weekdays and around 2,000 people visit on the weekends the entry is free and the visiting hours are from 9.30 am to 12.30 pm and 12.30 pm to 5.30 pm and it is closed on Wednesdays.

The hospital in the aviary is equipped with x-ray machine, operation theatre, DNA lab and blood testing facility and has well qualified staff which includes veterinarians. “Foot mats at all the entrances are sprayed with Virkon liquid which kills bacteria. The birds are also given regular vaccines to prevent them from common viruses,” says the caretaker of the lab at the bird hospital.

The hospital has successfully performed surgeries and the birds have recovered well with the proper care and medical aid, the handicapped and congenital deformity birds are hand-fed three times a day.