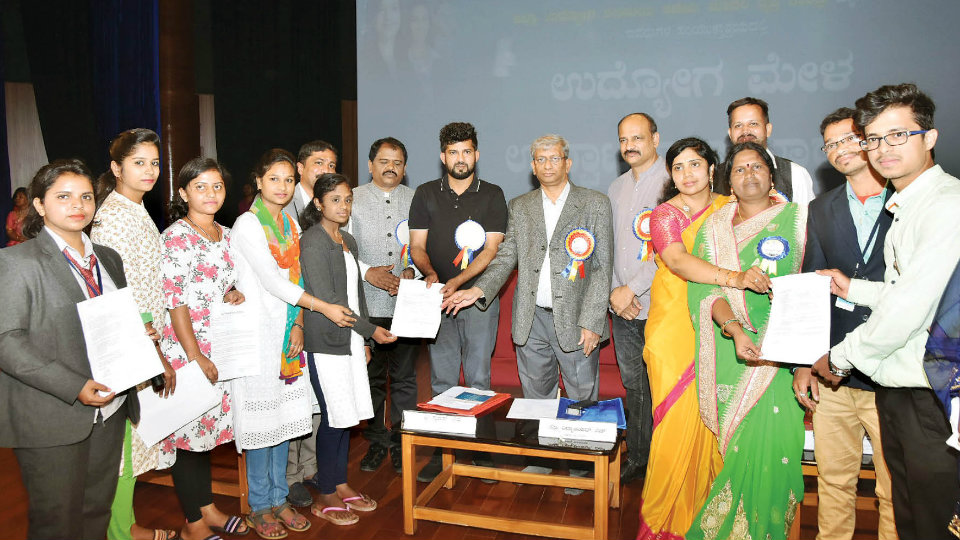 The Placement Cell of KSOU had organised the mega Job Fair in association with the District Employment Exchange Office.

More than 7,200 youths with qualifications ranging from Graduation to Doctoral degree had registered for the Mela.

While 4,100 candidates had registered online, the rest took part with spot and offline registration. There are more than 5,600 vacancies up for grabs and there were many other openings too.

A total of 86 well-known companies, including many MNCs,  are taking part in the Mela, recruiting candidates with different qualifications and according to their requirement.

Speaking after inaugurating the mega Job Fair, Mysuru-Kodagu MP Pratap Simha said that it is not a small thing to bring 86 noted companies under one roof for a Job Fair and the KSOU must be complimented for achieving this.

Pointing out that there were 12 Engineering and 83 Degree colleges in the Lok Sabha constituency when he first contested the polls five years ago, he said that Mysuru, apart from becoming an education hub, is now focussing more on Skill Development, as it holds key for the youth to get employed.

Regretting that though Mysuru is known for it’s beautiful parks, palaces and a host of other tourism spots, the city was lacking in Industries and this was because of poor transport connectivity. But now, the situation has changed with the Airport becoming a buzz of activity, Doubling of Mysuru-Bengaluru Railway Track, 10-lane (including two service roads) Mysuru-Bengaluru Highway taken up at a cost of Rs.7,550 crore and other improvements in infrastructure, he said.

Stating that he has talked to many manufacturing companies and MNCs to set up units in city in order to boost employment opportunities, Simha hoped that the city will also become a major industrial hub in the next few years with improvementin infrastructure.

Maintaining that he had strived hard for KSOU getting back UGC recognition, he opined that now that the recognition row has been addressed, the KSOU might not have any issues with the UGC in future.

KSOU VC Dr. S. Vidyashankar, who presided, said that there are job opportunities in almost all sectors and it is skill that matters the most in landing jobs. Stressing on the need for setting up more Skill Development Centres in accordance with the modern day needs, he said that KSOU has prepared a DPR for setting up an advanced Skill Development Centre in the campus.

Maintaining that with the manufacturing sector getting automated, it is the service sector that provides the maximum number of job opportunities, Dr.Vidyashankar asked the candidates not to let go any opportunity, even a small one, that come in their way.