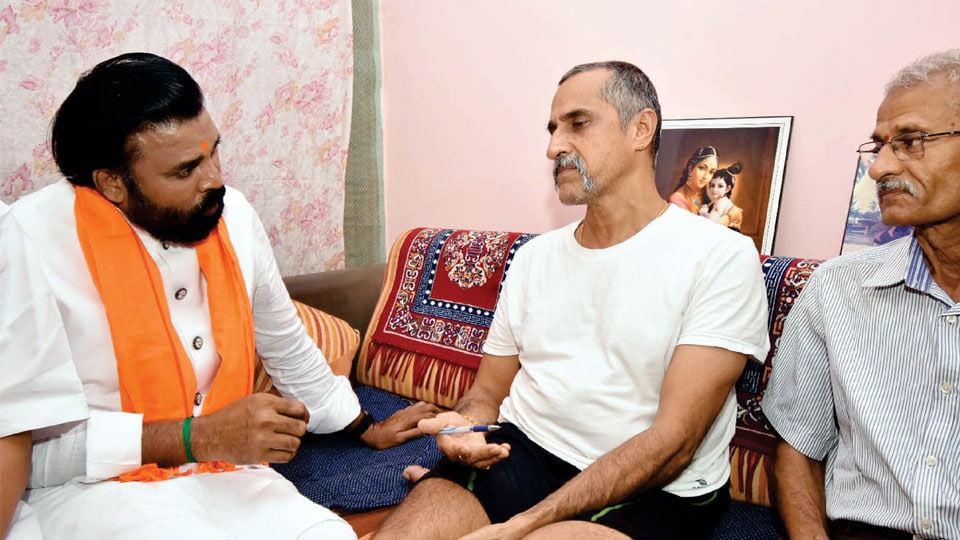 Mysuru/Mysore: The San Bernardino Police have traced the killer of Abhishek Sudhesh Bhat who was murdered in a motel in San Bernardino, California, east of Los Angeles. Abhishek, a resident of Kuvempunagar in city, was pursuing his Master’s in Computer Science at California State University in San Bernardino.

He was shot dead inside the motel where he was working part-time. Abhishek was found dead outside the motel room by his colleagues around 11.30 pm California time on Thursday. A friend of his in the US informed the parents Sudhesh Chand and Nandini Aithal, who reside in Kuvempunagar, about the incident. Abhishek was about to wind up his work for the day when the shooting took place.

Abhishek studied Engineering (Computer Science) in Vidya Vikas Institute of Engineering & Technology (not Vidyavardhaka College of Engineering as published in Star of Mysore yesterday) and went to California one-and-a-half years back. Abhishek completed his engineering in 2012-2016 batch.

Abhishek’s family member Ramnath told Star of Mysore this morning that the family has information of San Bernardino Police identifying the killer who shot Abhishek on his forehead. The Police traced the killer through CCTV footages of the motel. “The killer is Afro-American origin and is deranged. After killing Abhishek, the killer fled towards Los Angeles in a vehicle and efforts are on to nab him,” Ramnath said.

“We have got information that it will take eight days for the San Bernardino Police to complete the post-mortem formalities. Details will emerge only after Dec. 9 when the formal legal procedures are completed,” Ramnath said.

On the family going to California, he said that they were waiting for confirmation and information from US Consulate and the Indian High Commission. “We have already contacted Mysuru MP Pratap Simha, who has promised all help. We are in touch with Ministry of External Affairs for assistance and coordinating with the Indian Embassy in the United States. Abhishek’s parents are planning to leave for the US after the completion of legal procedures to secure the body,” he said.

Reacting on the formal procedures, Mysuru Deputy Commissioner Abhiram G. Sankar told Star of Mysore that the District Administration will extend all possible help to Abhishek’s family. “I have already spoken to the City Police Commissioner. As of now, there is no official confirmation and we have got information through news reports. The case is being handled by the External Affairs Ministry, Indian High Commission and US Consulate,” he said.

Vasu, former MLA and Founder Chairperson of Vidya Vikas Educational Trust, told reporters that his institute stands with the family in their hour of grief. “We would extend all possible assistance to the grieving family,” Vasu said.