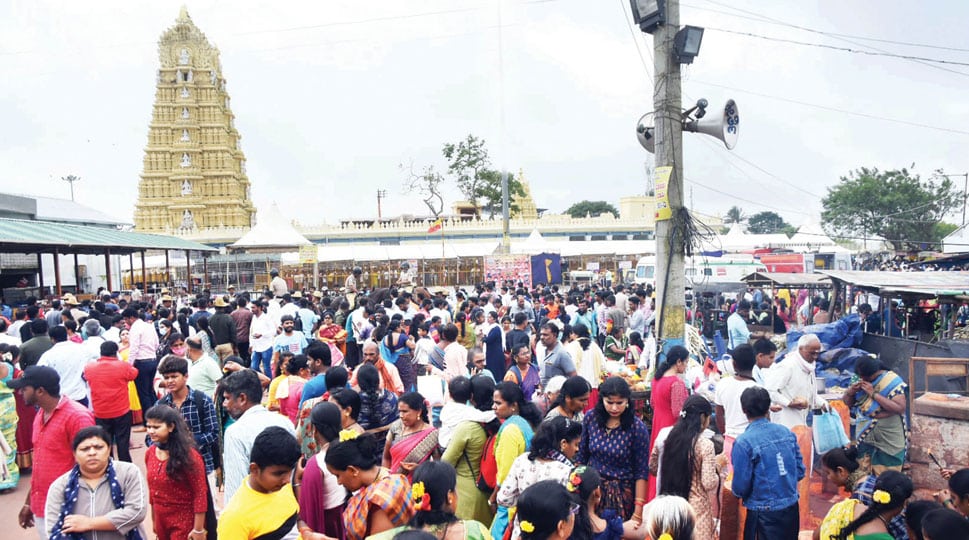 Mysore/Mysuru: With clear skies and the Sun shining bright, thousands of devotees from in and around the city thronged Sri Chamundeshwari Temple atop Chamundi Hill on the occasion of last Ashada Shukravara this morning.

The devotees began climbing the steps from 1 am to reach the Hill Temple to have darshan of the presiding deity decorated with Simhavahini Alankara.

The special puja rituals began at 3.30 am with priests, under the guidance of the Temple Chief Priest Dr. N. Shashishekar Dikshit, performing Mahanyasa Purvaka Rudrabhishekam, Abhisheka, various Archanas, Mahamangalarathi etc. Devotees were allowed to have the darshan at 6 am.

The temple and its surroundings were decorated with colourful flowers. Thousands of devotees from across State and neighbouring Tamil Nadu too thronged the Hill Temple with many climbing the 1,008 steps of the Hill to fulfill their vows as today is the last Ashada Friday. The Temple witnessed a huge crowd compared to the previous three Ashada Fridays and Chamundeshwari Vardhanthi.

Devotees from Tamil Nadu, who came in their own vehicles in large numbers, parked the vehicles at the designated parking lot and took the free bus service to the hill top as today is the first Ashada Friday in Tamil Nadu which is  called as Adi Vara.

Prasadam was distributed at Dasoha Bhavan for devotees. As Police had issued orders cancelling VIP passes, the Hill Temple saw least number of private vehicles. Devotees in large numbers made use of the free bus facilities arranged from the grounds near Lalitha Mahal to the Hill Temple. There was tight Police security all over the Temple to ensure smooth movement of people.

Many devotees, who had made a vow, were seen distributing prasadam to the devotees at various places. Several volunteers, organisations and institutions who performed puja to the portrait of Goddess Chamundeshwari in various localities including K.G. Koppal, T.K. Layout, Kuvempunagar, Tilak Nagar, Kurubarahalli Circle, near MUDA Circle, RMC, J.P. Nagar, APMC, Srirampura  etc. distributed prasada to the general public.