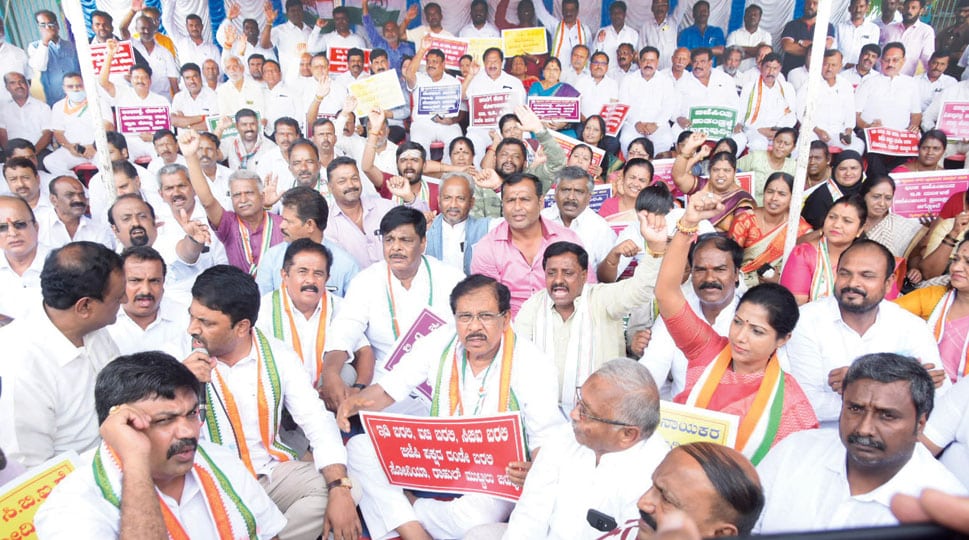 Mysore/Mysuru: Enraged by the questioning of Congress supremo Sonia Gandhi by the Enforcement Directorate (ED) in National Herald money laundering case, party workers are staging protests across the country since yesterday.

The 75-year-old Congress Chief was questioned by the Central agency a few days after she tested negative for COVID-19 and was released from the hospital. Strongly condemning the ED action, hundreds of Congress workers staged a massive demonstration at Gandhi Square in Mysuru this morning.

The protestors were led by former Deputy Chief Minister Dr. G. Parameshwara. He accused the Centre of misusing Central agencies such as ED, IT and CBI for targeting Congress leaders.

Alleging that the Centre is using Constitutional agencies against Opposition leaders, he questioned the ED’s action of summoning Sonia Gandhi when no FIR had been registered against her.

Maintaining that the BJP Government at the Centre was out to settle scores with Opposition leaders by unfairly targeting them, Dr. Parameshwara urged the Centre to stop misusing Central agencies. He warned of a nationwide demonstration too.

Later, the Congress workers set out on a padayatra to the IT (Income Tax) office in Nazarbad, when they were stopped by the Police at Silver Jubilee Clock Tower, following which a verbal argument broke out between the Police and the protestors.

As heated exchanges ensued, the Police bundled Congress leader Dr. H.C. Mahadevappa and scores of other leaders into a van and took them to CAR grounds, from where they will be released later in the afternoon.

READ ALSO  Will visit Suttur Mutt whenever I come to Mysuru: KPCC Chief