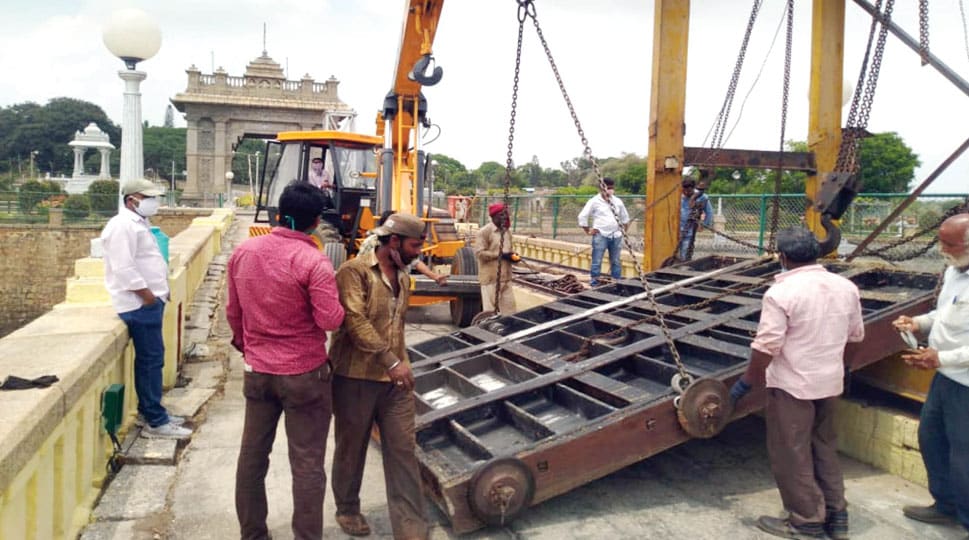 Mysore/Mysuru: A museum of old crest gates conceptualised and designed by Sir M. Visvesvaraya will be an added attraction for tourists who visit the 90-year-old Krishna Raja Sagar (KRS) Dam as the Cauvery Neeravari Nigam Limited (CNNL) that manages the reservoir is making grand plans for the same.

These crest gates, numbering over 173, are made out of iron where molten iron was poured into moulds and then left to cool. The museum will come up within the KRS Dam premises and the legacy gates will be arranged in such a manner that visitors can see how exactly the Dam gates function during water release when the reservoir reaches its full capacity.

But for the museum to come up, the replacement of old crest gates must be completed and now, the works have been put on hold as the reservoir is filled up to the brim and there is no scope to replace the old crest gates. Instead, the CNNL authorities have taken up ‘hoisting work’ above the Dam structure.

In all, there are 173 crest gates in the Dam including 152 flood gates and the gates from where water is released to canals. The project has been taken up with the Rs. 57-crore World Bank-funded Dam Rehabilitation and Improvement Project (DRIP). In all, 136 gates have to be replaced under the project.

When Chief Minister Basavaraj Bommai was the Water Resources Minister in the B.S. Yediyurappa cabinet of 2008, 16 gates were replaced at 80 ft level. Bommai, during his recent visit to the KRS Dam to offer Bagina, recalled that when he visited the Dam in 2008, the condition of the crest gates was bad and gunny bags were used to plug leakage.

“Later, a decision was taken to replace the crest gates in a systematic manner and 16 gates were replaced in the first phase,” he said. Continuing, the CM said that in all, the State has released Rs. 160 crore so far for the Dam works.

“The safety of the Dam has been enhanced. Also, the life span of the original crest gates was 35 years but they were utilised for 75 years. Now the new gates will have a longer lifespan and will be more efficient,”  Bommai added.