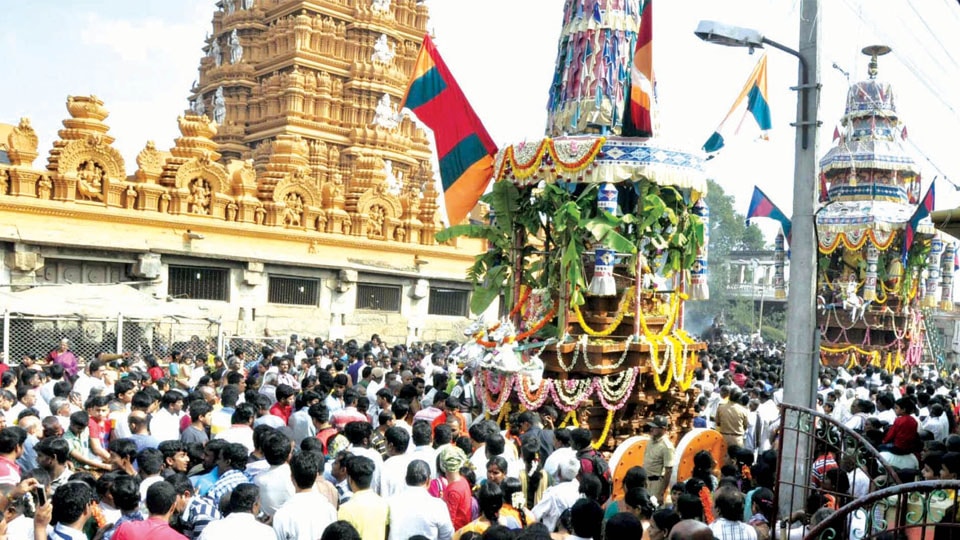 Nanjangud: The temple town of Nanjangud today witnessed a heavy rush of devotees from across several districts for the famous Chikka Jathre at the famous Srikanteshwara Temple in the town, popularly known as ‘Dakshina Kashi.’

The Rathas, marking the ‘Chikka Jathre,’ took off from the temple at 9.45 am, in the auspicious ‘Makara Lagna’ amidst the chanting of mantras and performance of rituals by the Temple Chief Priest J. Nagachandra Dikshit and other fellow Priests.

The number of devotees attending the event was all the more as today was a Sunday.

The first ‘Ratha’ (Chariot) to move was Ganapati   Ratha, followed by Chandikeshwara  Ratha and Srikanteshwaraswamy Ratha.

As the three Rathas passed through the main thoroughfares of the town, the people who were eagerly waiting along the streets, showered ‘Hannu-Havana’ at the Rathas all along the route.

Later Prasada was distributed to the devotees.

The Police had provided tight security all along the route of the ‘Jathre’ to ensure that no untoward incident takes place.