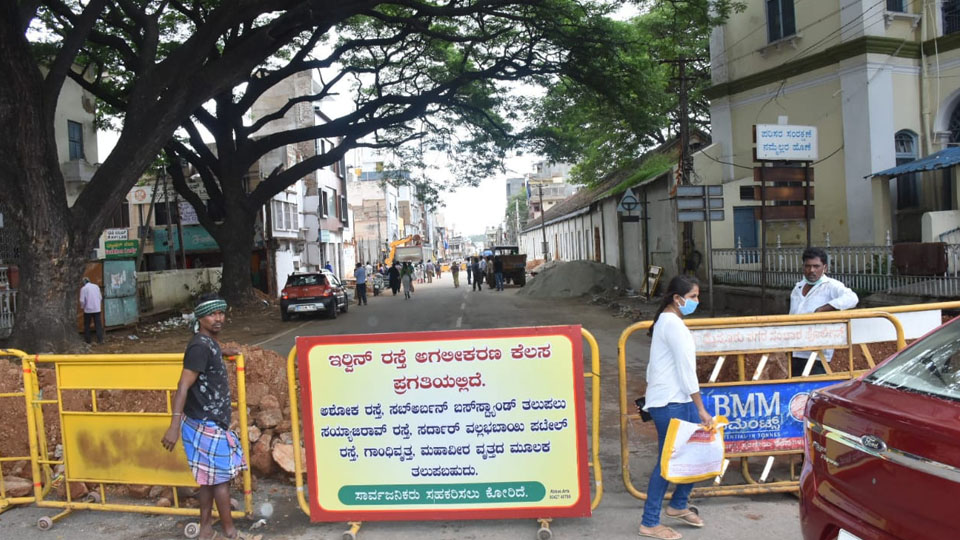 After widening, it will be a 60-feet road including footpath

Mysore/Mysuru: Following a request by the Mysuru City Corporation (MCC) to Mysuru Police to impose a ban on traffic on the Irwin Road to take up road widening works, City Police Commissioner Dr. Chandragupta has banned the movement of all types of vehicles on Irwin Road up to three months and has urged motorists to take alternate roads suggested by the Police.

There will be a ban on movement of all types of vehicles on both ways from Nehru Circle to Sir M. Visvesvaraya Circle (Government Ayurveda College Circle) for three months to take up the pending widening and development works on Irwin Road. The Police Commissioner’s order, effective from June 16, has provided alternative routes for motorists for smooth flow of traffic.

All vehicles, except Heavy Motor Vehicles (HMV), plying from Nehru Circle to Sir M. Visvesvaraya Circle should proceed towards the North of Ashoka Road to reach Kabir Road junction, take a turn towards west side and pass through Kabir Road to reach New Sayyaji Rao Road and proceed further.

Those vehicles coming from Sir M. Visvesvaraya Circle towards Nehru Circle should take a turn towards the south, proceed on Sayyaji Rao Road-Sardar Vallabhbhai Patel Road-Gandhi Square-Mahaveer Circle, take a right turn and proceed in front of Town Hall and move further, according to a press release from the Public Relations Officer (PRO), City Police Commissioner’s Office, Mysuru.

For the road widening and beautification, Rs. 47 crore has been provided under State Finance Commission (SFC) Grants. After widening, it will be a 60-feet (18-metre) road including footpath. The four-lane road will have a median and box drainage feature. The road will get a heritage character with ornamental lamp posts. Much to the relief of commuters, the road will be traffic jam-free stretch.