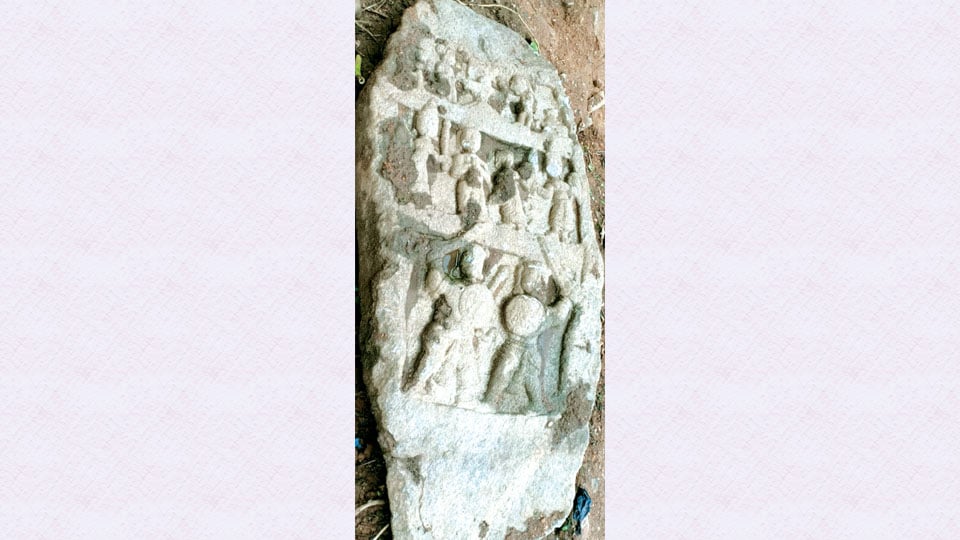 Mysore/Mysuru: In a latest discovery, the Department of Archaeology, Museums and Heritage, has unearthed three ‘Veeragallu’ (Hero Stones) that  date back to the 15th century Vijayanagar empire.

The Department  had taken up a cleaning drive near Mahalingeshwara Temple at B.M. Shri Nagar in Metagalli, when one Hero Stone was found beneath the earth and two others covered in thick bushes and plants.

These Hero Stones are said to be inscriptions for martyred soldiers of the Vijayanagar empire who had died in a war.

Speaking to press-persons, the Department’s Museum Curator Sunil Kumar said that cleaning was being taken up near Mahalingeshwara Temple prior to an excavation, when two Hero Stones were first discovered and another one subsequently.

Stating that there are chances of a few more Hero Stones  lying beneath the earth, he said that all the three Hero Stones have three differentiations. While the one at the top signifies that martyred soldiers attain heaven, the middle one carries inscriptions depicting women carrying martyred soldiers to heaven and the bottom one depicts the heroics of soldiers, he said and added that the inscriptions reflect on the war that took place during the time of Vijayanagar rulers.

He  further said that the discovered Hero Stones do not hint at any sort of association between Metagalli and Vijayanagar empire. Sunil Kumar also said that the Department left the Hero Stones at the spot of their discovery as local residents promised to conserve them.