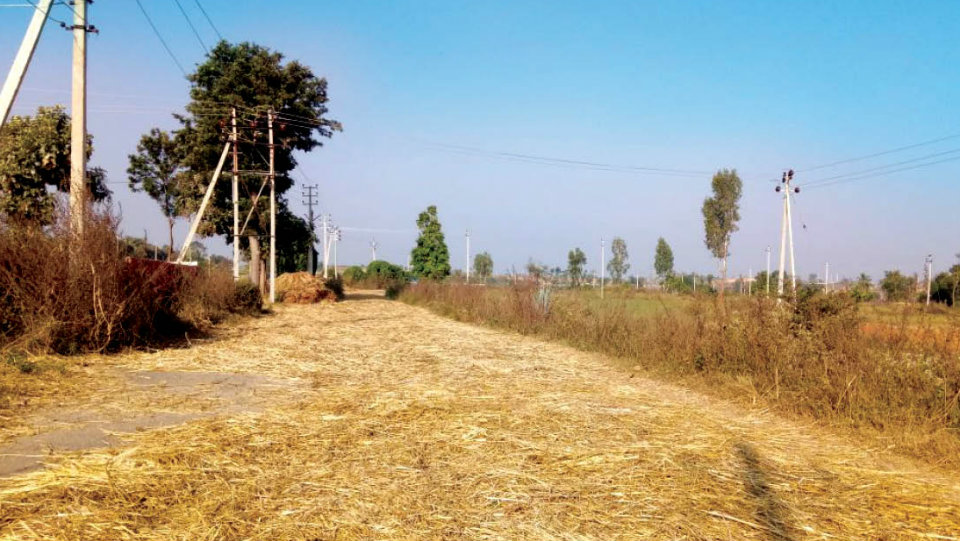 Mysuru: Following a series of complaints from motorists about threshing paddy, horse gram and ragi crops on roads to separate the crop from the sheaves that cause accidents, Mysuru Superintendent of Police Ravi D. Channannavar has directed Sub-Inspectors to hold meetings with farmers along with Panchayat Development Officers and other Revenue Department officials to discourage the farmers from using public roads for threshing their harvest.

As the harvesting season reaches its peak in the month of December and January, farmers use roads to thrash harvested crop in order to obtain grains. Roads including T. Narasipura Road, Bannur Road, Suttur Road, M.C. Hundi, Meghalapura Road, Mellahalli, Varakodu, Thanthigulli, Badagalahundi and surrounding areas are used by farmers for this purpose.

Farmers spread straws on roads, forcing vehicles to flatten them. In some places, farmers heap straws on the roadside, too, forcing drivers to inch their vehicles forward. Very often, straw gets entangled with the wheels of the vehicles, sometimes causing them to slip off the road. Motorcyclists face this danger most of the times.

It may be recalled here that on Dec. 25, a couple of cars and SUVs were involved in a series of accidents occurring at Shiramalli near Yelamathur Gate (Handpost-N.Begur Road) on the H.D. Kote Road as they crashed into one another when the drivers lost control over their vehicles.

As the vehicles passed the crop-laden roads, they skidded and due to dust they could not see the vehicles that were moving ahead, resulting in accidents. Enraged after seeing their damaged cars, vehicle owners set the sheaves on fire. A complaint was filed at the H.D. Kote Police Station by Praveen and Karthik, residents of Dattagalli in Mysuru.

Ravi Channannavar has told officials to create awareness against the practice and its consequences. If the farmers fail to abide by the warning, the police officials had been directed to initiate strict against them.