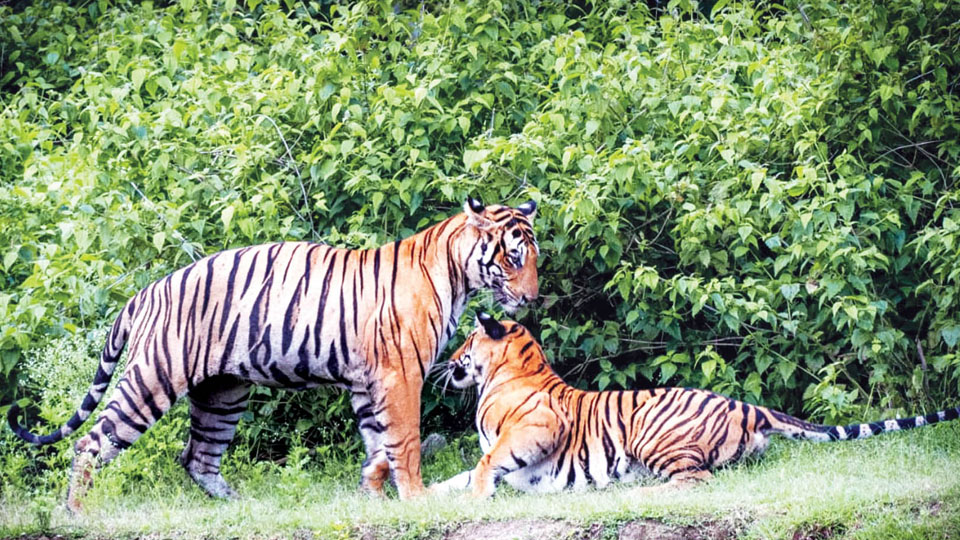 Mysore/Mysuru: If Madhya Pradesh has bagged the number one position in the now released extended report of the 2018 tiger headcount (‘Status of Tigers, Co-predators and Prey in India’) with 526 felines, Karnataka stands second with 524 big cats.

The extended report of the 2018 tiger headcount that has been released now says there are 173 tigers in Bandipur and 164 in Nagarahole, a remarkable increase from the 2018 census that showed 127 tigers in Nagarahole and 126 in Bandipur. 446 big cats have been spotted in the Old Mysuru region while 363 big cats were tracked in 2018.

Incidentally, today is World Tiger Day and India has 70 percent of the world’s tiger population spread across its 51 Tiger Reserves. The big cat census is conducted once in four years and the 2021 census has already begun at Nagarahole and later it will be conducted at Bandipur, the report of which is expected in the next two years.

Greeting wildlife lovers on this day, Prime Minister Modi posted a series of tweets from his official handle on the microblogging website, where he highlighted how India has led tiger conservation efforts over the past years and achieved significant milestones in this area.

“On International Tiger Day, greetings to wildlife lovers, especially those who are passionate about tiger conservation,” the Prime Minister wrote in a tweet. “Home to over 70 percent of the tiger population globally, we reiterate our commitment to ensuring safe habitats for our tigers and nurturing tiger-friendly eco-systems.”

In their virtual presentations, the resource persons noted that India has made a marked comeback in its tiger conservation efforts, from nearing endangerment to now being home to 70 percent of the world’s  tiger population.

“We have come a long way from the hunting practices followed in the British Raj. Tiger conservation strategy is unique and the Forest Department and the National Tiger Conservation Authority attach special importance towards involving local communities in conservation efforts,” they noted.