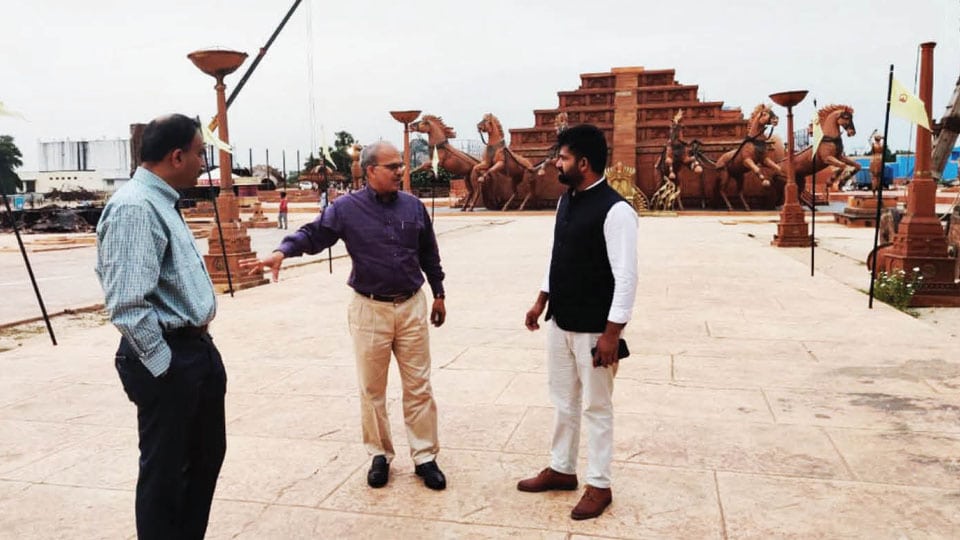 To be built on the lines of Ramoji Film City: Pratap Simha

Mysuru:  The much sought-after and forgotten Film City, which was granted to Mysuru, the City of  Palaces when Siddharamaiah was the Chief Minister and which was later shifted to Ramanagara when H.D. Kumaraswamy was the CM, is in the news again.

And this time, Mysuru-Kodagu MP Pratap Simha has announced that works are underway to set up a Multi-Film Studio and Logistics Park on the lines of Ramoji Film City in Hyderabad.

Incidentally, Simha had recently visited Ramoji Film City in Hyderabad and had met its CEO Rajeev Jalnapurkar and requested him to build a Film City in Mysuru.

In his recent Twitter post, Simha had posted photos of his visit and had revealed that he had invited Rajeev to visit Mysuru and build a plan for the proposed Film City.

The Ramoji Film City that is located in Hyderabad (Telangana) is the largest integrated Film City and has been certified by the Guinness World Records as the largest studio complex in the world. It was built in 1996 by Telugu film producer, C. Ramoji Rao.

Yesterday, an event was held at the Golden Jubilee Hall of NIE College in city where Alamelamma Memorial Scholarships were distributed to students under the aegis of Hulagadri Trust.

At the event, Pratap Simha said that Mysuru attracts over 35 lakh tourists every year and the numbers keep rising. “A Multi-Studio and Logistics Park will provide filmmakers to come to Mysuru and this will also boost tourism,” he said.

“Most of the tourists come to Mysuru, visit a few tourist destinations and leave the city. They do not have a place to spend at least two to three days. A Film City like the Ramoji Film City will retain tourists. Plans are afoot to build the Film City infrastructure in Mysuru,” he said. Simha added that Mysuru is best suited for the Film City as there are over 250 scenic locations to shoot a movie.

Touching upon other aspects of Mysuru Tourism, the MP said that except for the vast contribution of Wadiyars to the sector, no politician from the region has taken a keen interest in promoting tourism. “The contribution of Nalwadi Krishnaraja Wadiyar, Jayachamaraja Wadiyar and Sir M. Visvesvaraya is memorable and emulation-worthy. Unfortunately, today some political leaders talk lightly about them and negate their valuable contribution to tourism,” he added.