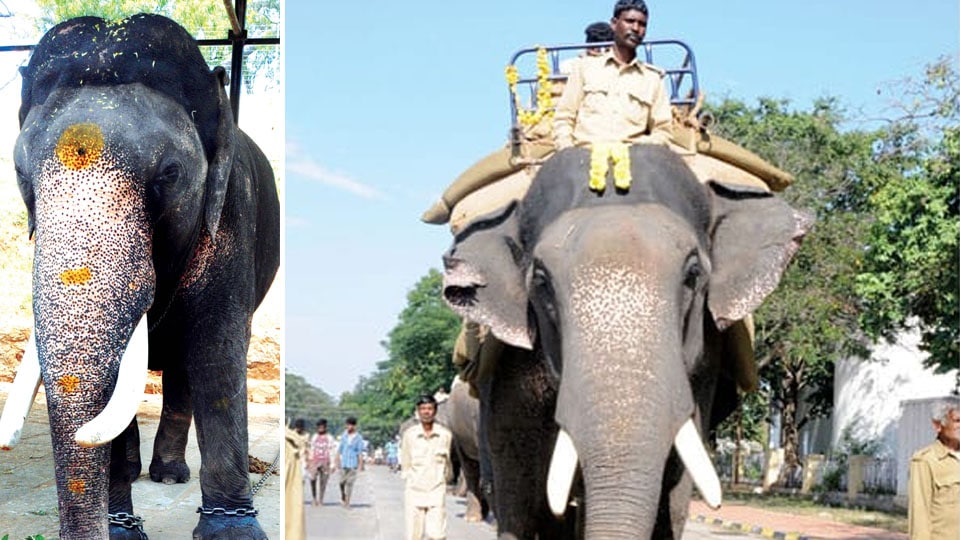 Mysore/Mysuru:  Dhananjaya, the 37-year-old elephant, who has been touted as future Ambari elephant, proved his mettle by carrying the wooden howdah and sand bags weighing a total of 800 kg during the weight  training yesterday.

With just four days for the inauguration of Dasara festivities atop Chamundi Hill, the process of giving training to the Dasara jumbo squad has reached the final stages. The process of tying the wooden howdah on Abhimanyu’s back and training him to carry the same began on Friday as Abhimanyu has to carry the 750 kg

Golden Howdah during Jumboo Savari on Vijayadashami day (Oct. 15). But yesterday, Gaadhi Namdha (a cushion-bed-like material) weighing 120 kg, 100 kg chaapu was fastened on Dhananjaya’s back and wooden howdah weighing 280 kg was tied on it. Later, sand bags weighing 300 kg was placed inside and Mahout Bhaskar guided Dhananjaya during the training.