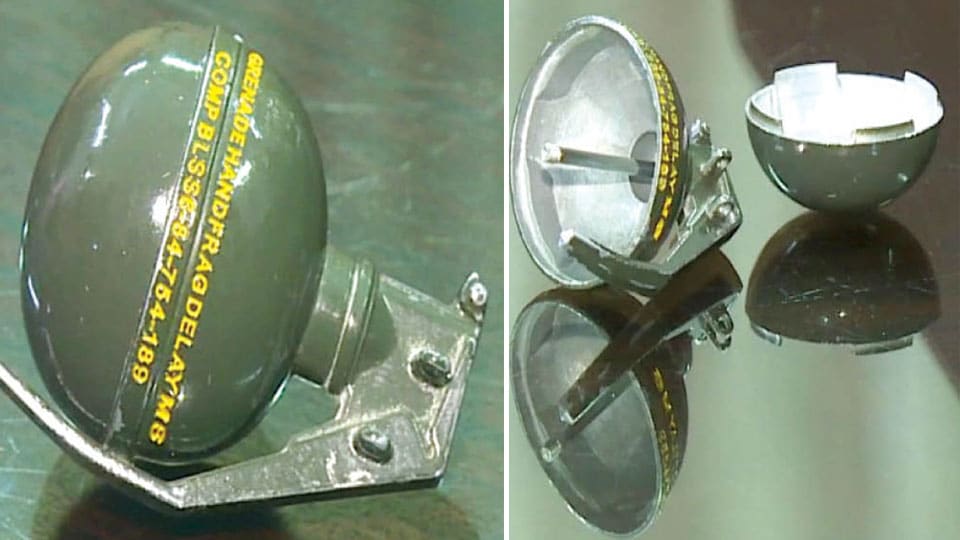 Mysuru: A toy grenade keychain that was found under the
Hinkal Flyover yesterday afternoon created panic among people.

One Ramprasad, who was riding his two-wheeler under the Flyover, saw the grenade-like object and immediately carried the object to Mandi Police Station, where he handed it over to a Police officer.

The toy, which was the size of a tennis ball, was painted green and had some numbers written on it.

As the place where the object was found came under Vijayanagar Police limits, Mandi Police passed on the information to Vijayanagar Police Station and the cops rushed to the spot and inspected the area for any other suspicious objects. Tense moments prevailed among people when the news spread that someone had thrown a grenade under Hinkal Flyover.

DCP M. Muthuraj, who rushed to Mandi Police Station, wrapped the grenade-like object in a blanket, placed it inside a sand bag and took it to City Police Commissioner’s office. When Sniffer Dog and Bomb Squad inspected the object, it came to light that it was only toy grenade keychain.

Meanwhile, City Police Commissioner K.T. Balakrishna, speaking to media, said that the grenade-like object had created some tense moments and added that it was a challenge to the security forces, especially at the time of elections.

The City Top Cop further stated that the toy grenade keychain had a number on it and to clear suspicions, he broke open the object. He asked the public not to panic. He also said that investigation would be carried out on who threw the suspicious object in a public place.