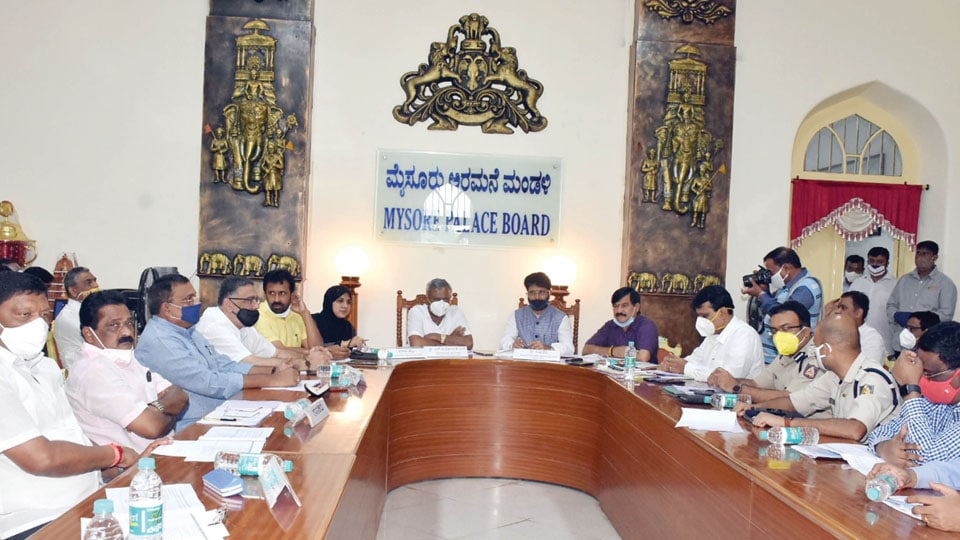 Traditional Dasara 2020 with a digital touch

Mysore/Mysuru: With COVID-19 spread threat looming large, this year’s annual Dasara cultural programmes to be held against the backdrop of illuminated Mysore Palace will be streamed live through social media to avoid crowding of people at the venue.

This was one among the several decisions taken at the Dasara Executive Committee Meeting chaired by Mysuru District Minister S.T. Somashekar along with Kannada and Culture and Tourism Minister C.T. Ravi in city last evening.

Giving a break to the practice of having three to four cultural events on a single day at the Palace venue all these years, it has been decided to have only one programme by an individual or a group of artistes of State, National or international repute. These programmes will be live-streamed on various social media platforms.

All the nine days

Briefing reporters after the meeting, the Minister said that the cultural events, this time, will be restricted only to Palace and atop the Chamundi Hill but they will be held on all the nine days of the festival. While devotion-based programmes are planned at Chamundi Hill, the Palace will be the venue for music programme of three-hour duration by an artiste or by a troupe.

COVID guidelines issued by the Union Health Ministry will be strictly followed. The Government has sought permission to allow 2,000 spectators inside the Palace premises (adhering to social distancing norms) to witness the cultural events daily, Somashekar said.

He said, as decided at the Dasara High Power Committee meeting presided by Chief Minister B.S. Yediyurappa last week, five Corona Warriors, comprising Doctors, ASHA workers, Police, Pourakarmikas and Nurses, will be invited for the Dasara inauguration but one will declare open the Nada Habba atop Chamundi Hill on Oct. 17 between 7.45 am and 8.15 am. The other four will be felicitated. Apart from this, a person who has been conducting last rites of COVID-19 victims will also be honoured.

READ ALSO  Till we meet again...

Replying to a question, Somashekar said the Dasara elephants will be accorded a warm welcome in a simple manner without any fanfare in front of Mysore Palace on Oct. 2 at 12.18 pm. Fifty persons are allowed to be present at the spot to receive the only batch of five elephants. Only a couple of senior officials and elected representatives will be present to welcome Dasara elephants while entry of public will be banned.

Resting all speculations regarding the Golden Howdah-carrying elephant, the District Minister said the 750-kg Golden Howdah will be carried by Abhimanyu as Arjuna has crossed 60 years of age.

The CM will perform the puja to Nandi Dhwaja on Oct. 26 which marks the beginning of Vijayadashami procession. This time, the Jumboo Savari is restricted within the Palace premises. So far, no decision has been taken on allowing people to watch the procession. Minister C.T. Ravi has been asked to constitute a Committee to select a suitable person for this year’s ‘State Sangeetha Vidwan’ Award.