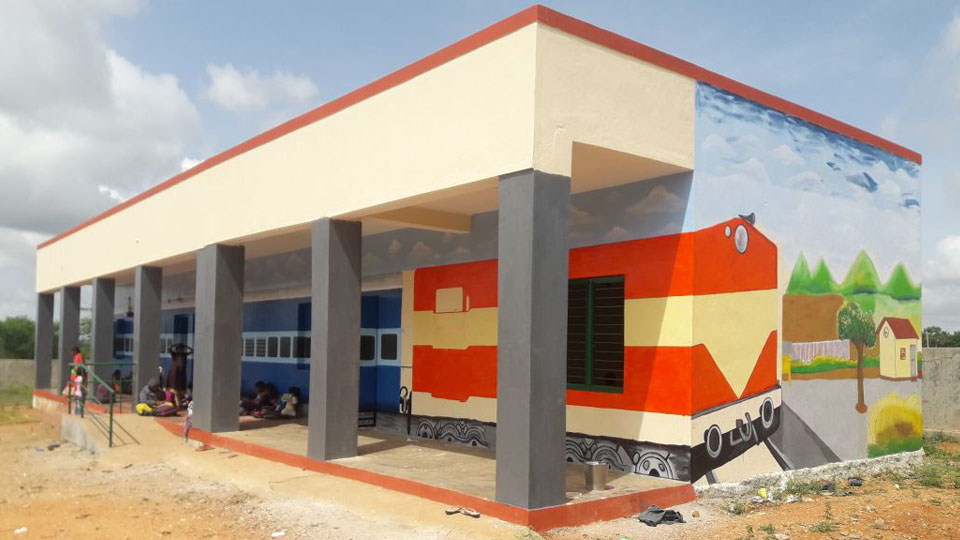 While there are many who board trains to reach their schools, there are only a few who are actually studying sitting inside one. This Weekend Star Supplement narrates the story of a Government school in the nearby Nanjangud Taluk that has been painted to look like a Railway Station — complete with train, platform and engine.

This Train chugs without Wheels & Tracks: Teachers pool in their own money to turn Government School building into a train

Even as the Toy Train in the Bal Bhavan at Bannimantap in Mysuru is languishing and gathering rust due to lack of initiative and official apathy, depriving scores of little children the joy of riding in a train, here is a heartening story of a group of four Primary School teachers in a small village turning a school building into a train and the veranda a platform.

Children love trains and the teachers of this school at Haropura near Nanjangud are cashing on this love for trains to draw them into the study table. The sole purpose of this innovation and creativity is to attract more and more children into government schools at a time when the government itself is thinking of either shutting down State schools or merging them due to poor attendance, especially in remote and border areas.

Even as one enters the school and looks at the building, it looks like a train with an engine and bogies stationed in a platform. So real is the feeling that even the pillars are painted with the colours that resembles a Railway Station. While one side of the building is painted as the front engine (red and yellow colour complete with the loco-pilot’s section) the other end (three rooms) resembles the bogies that have been painted blue.  Even the doors and windows have been painted in the form of a train. The rooms that have been painted like bogies carry a unique number just like the way regular train bogies are numbered. 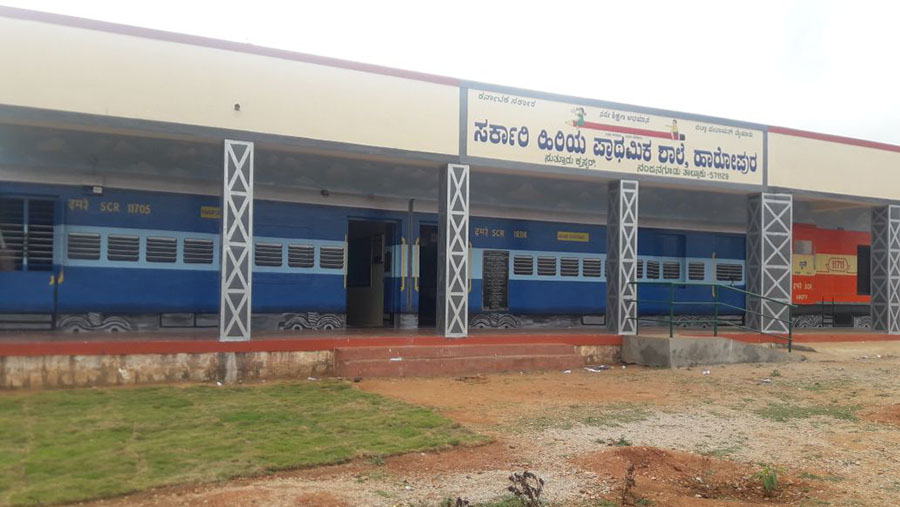 All it took for this transformation of a dreary old and mundane government school building was the happenstance of one of the teachers to look into the WhatsApp painting of a school in North India. The Higher Primary Government School is in Haropura village in Nanjangud taluk in Suttur cluster limits. It is about 30 kms from Nanjangud. The school now has become one of the major attractions with many people visiting just to see how a train has been created.

There are four teachers in the school which has strength of 55 students from standard one to seven. The staff includes Head Master Basavanayaka, Assistant Teachers S. Doreswamy, Tarannum Khanum and Nethravathi. All the four have pooled in Rs. 25,000 of their own money — from the meagre salary they get — to transform the building into a train. 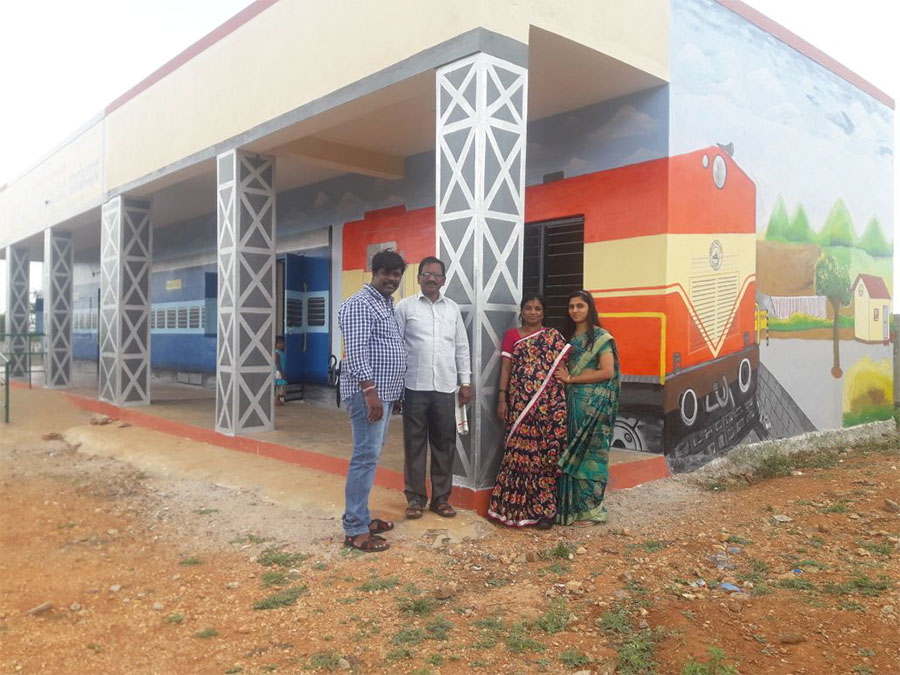 Speaking to Star of Mysore, Basavanayaka said that they thought of brightening up the school and after Doreswamy came up with the idea, they got two painters from Mysuru to paint the school in the colours of the train. “Children are always fascinated by trains and enjoy travelling in them. Government school buildings need to become attractive for students to have a sense of pride,” he said.

The school was recently shifted to the new place which is on a site of 160X180 ft with a lot of open space in the front. There were just two rooms. They approached the Glucose Bio-Tech factory near the school that helped them add one more room, said Basavanayaka. The switch from dull yellow walls to vibrant blue was done recently. After the room was added, Doreswamy showed Basavanayaka the WhatsApp photo and requested him to paint the school in the form of the train just like they had seen in the photo. “I told him that we do not have that kind of money to do it. But he insisted and then I decided that all of us will pool the money to paint the school,” he narrated. 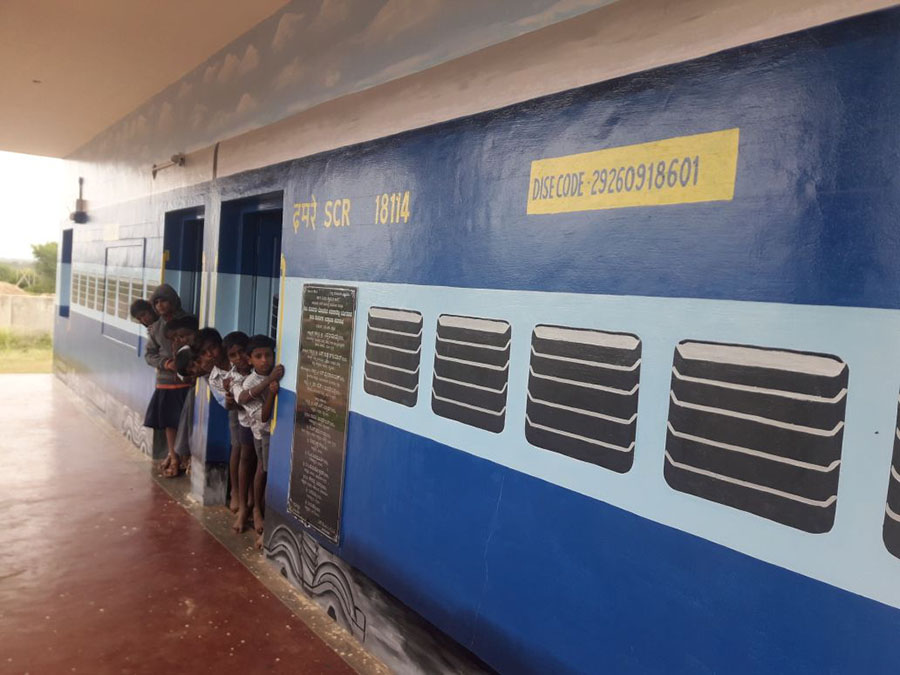 Doreswamy, himself a painter, has painted sketches of activities in the classrooms in different schools where he was transferred along with two painters from Mysuru, Venkatesh and Narayan. “I saw the photo of the train on WhatsApp and decided that we must do better than the one I had seen in the photo. Narayan and I did the outlines and Raghu, another painter, who was brought in, painted it. Even the classrooms inside have been painted like a train,” Doreswamy said. 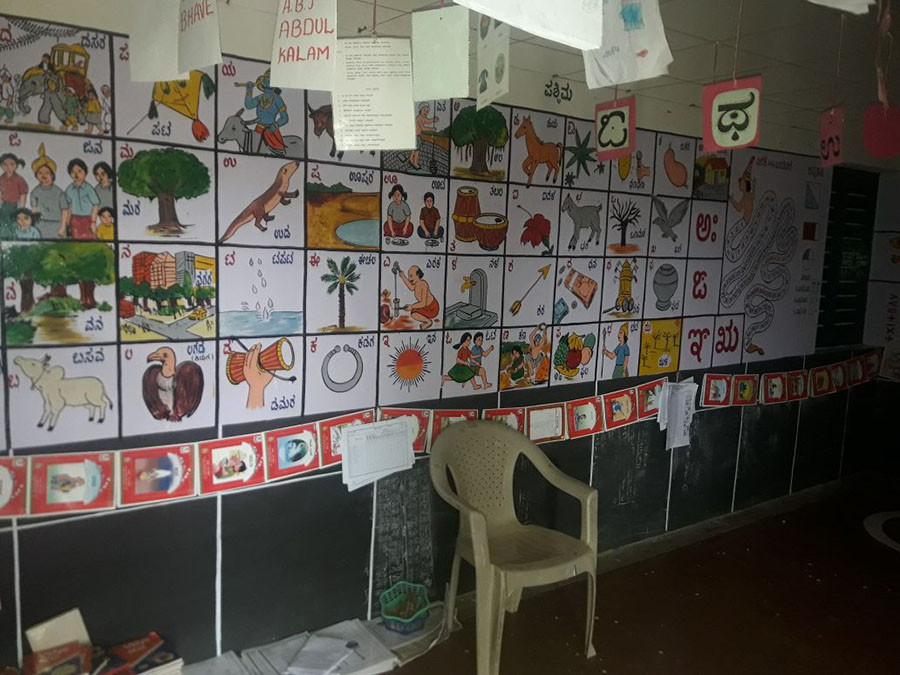 Basavanayaka said that they had planted 250 trees on World Environment Day in the school premises. The Gram Panchayat, impressed with the work, has come forward to build a compound wall around the school. Haropura village has just around 100 families and the dominant communities are Uppara and Scheduled Castes. There are also a few Rajputs living here and all of them are daily wagers working in the fields, he said.

“We all go door-to-door to attract children to the school. There are many issues here. We have to cook the mid-day meal in one of the classrooms converting it into a kitchen and at this time children will be taken outside while the other two classes are engaged and taught in the open,” he said.

“The new look of the building has paid off, with two students at an English medium school joining the Kannada medium government school in Haropura following its re-invention,” he added.

Block Education Officer M. Narayana, who was impressed with the selfless work of the teachers, has decided to get grants to build a few more rooms. 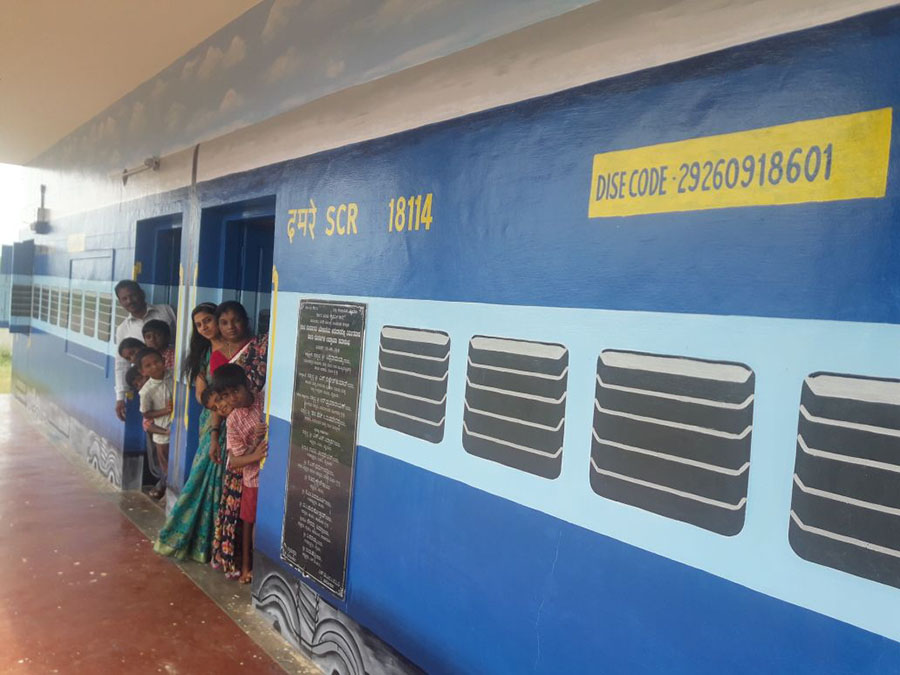 Speaking to SOM, he said that he would try to get the grants from SMG (School Maintenance Grant) and also from other sources and see that the teachers are compensated for their hard work.

There are no bus facilities to this village. The nearest bus station is Biligili or Thayur villages from where the teachers have to walk a distance of 4 km. While the Head Master himself goes to the school on a scooter from his home at Nagarle, covering a distance of 12 km, the other three teachers share a car driven by Doreswamy and reach the school on time every day. 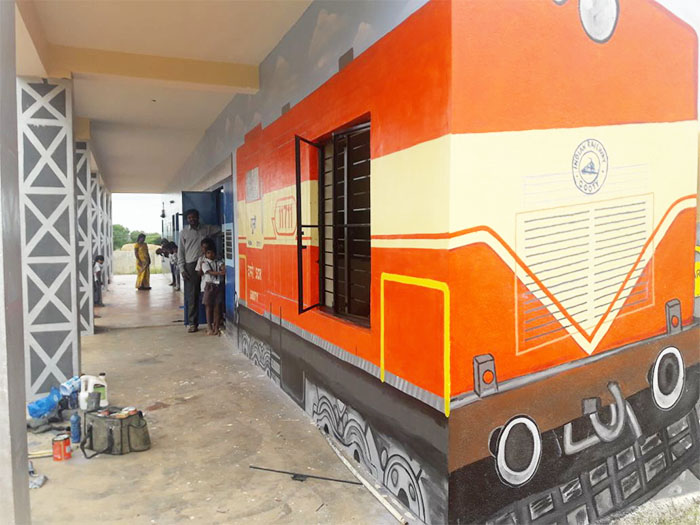 This Government Higher Primary School in Haropura has now become a major attraction with hundreds of villagers from surrounding areas stopping their motorbikes and take selfies.

This school with model and creative teachers should become an inspiration for many others to take initiatives to make learning both an education and fun with such innovative ideas, thus attracting the poor children to Government schools which will go a long way in making this country really literate – the issue neglected by successive governments since Independence.

At Alwar’s Government Senior Secondary School in Rajasthan, Railway Station takes its name quite literally. Here too, students race each other to grab the best seats in the dark blue coaches that have come to define Indian Railways. Some hang out of the compartments, egging on the laggards to join them. 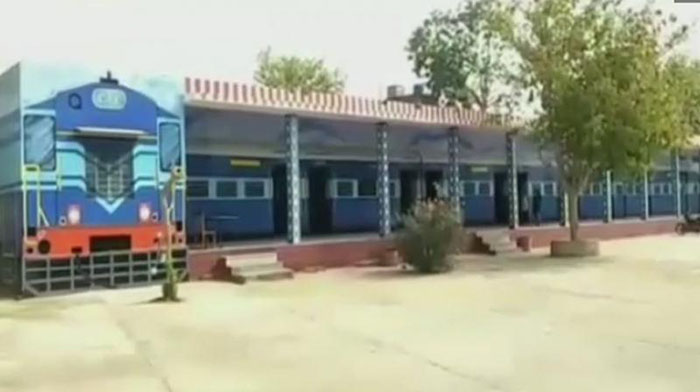 Here, the classrooms have been painted like passenger compartments, the principal’s office looks like an engine and the verandah is the “platform”. So, what was the inspiration behind the school sporting a train look?

When junior engineer of district Sarva Shiksha Abhiyan (SSA) Rajesh Lawania saw a government school in Kerala painted like a rail coach, he thought of the Alwar School. He implemented the same model at Alwar School and the switch from dull yellow walls to vibrant blue has been made possible by RDNC Mittal Foundation that adopted the school four years ago. 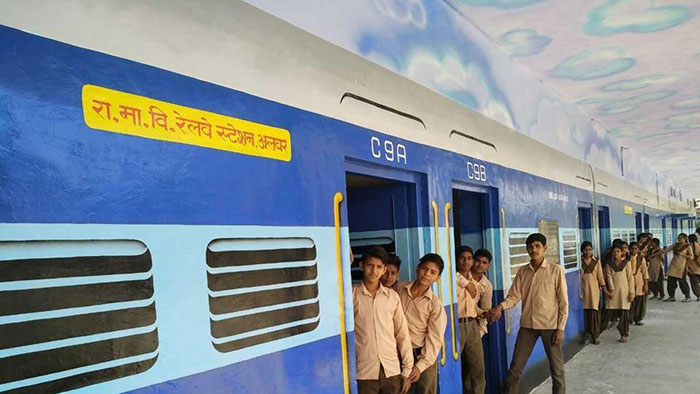