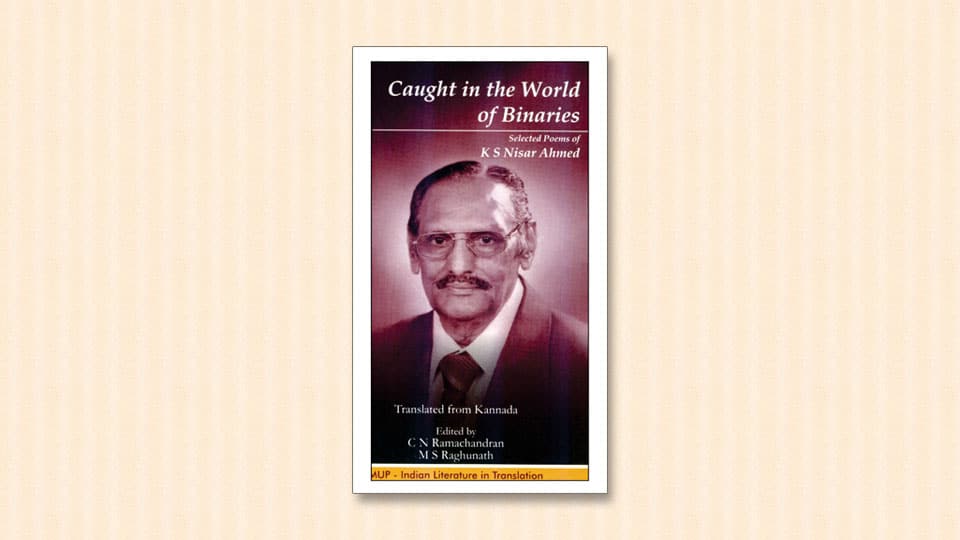 These are troubled times (when was it ever not!) when we are caught in the world of binaries. As Mark B. Baer, who writes on Empathy and Relationships, writes in Psychology Today, “When Binary Thinking is involved, Polarisation follows” and goes on to say “Anxiety from a lack of toleration for ambiguity leads to binary thinking.”

These thoughts came to my mind when I read, “Caught in the World of Binaries” which is a book that is very fresh and new, simply because of the effort that has gone into editing the book. This book contains the selected poems of Nadoja and Nityotsava poet Prof. Kokkare Hosahalli Shekh Haider Nisar Ahmed, popular as Prof. K.S. Nisar Ahmed, which is translated from Kannada into English.

Editors C.N. Ramachandran and M.S. Raghunath have selected 100 poems from the mind-boggling 600 poems written by the great poet till now. Though the Editors themselves have translated many poems, still there are 11 translators including the likes of V.K. Gokak and A.K. Ramanujan.

When one reads the introduction, the title seems to be apt as they take the poem “To Be With You and Yet Not to be Like You” to talk about the present times.

“The poem from which these lines are taken vividly describes the condition of an individual belonging to a minority and living in an “alien” society and it moves on to conclude, “when you inspect my spilt blood for the corpuscles of/nationalism,/right in my own presence,/to face it with a gentle smile/well, that is a very hard job,” write Ramachandran and Raghunath.

Then they go on to add, “Since the poet happens to be a Muslim, this poem can be misread as a “Muslim voice of protest in a Hindu majority society” and be  given a particular political orientation, forgetting that it was written in 1968. Hence, it can also be read as a “Hindu voice in Muslim majority nations,” or an “Indian voice in the US” and so on.

And as the Editors Ramachandran and Raghunath say in the acknowledgement “If  one is going through these poems, the non-Kannada readers find there a mature mind contemplating on contemporary ethos and exploring the possibility of a healthy pluralistic society, we shall consider our efforts amply rewarded.”

Having read ‘Seemateetana Sirivanta Suggi (selected poems) of Prof. Nisar Ahmed in Kannada before interviewing him, I can only say, read each translated poem slowly and understand the great mind of the poet who has penned those famous poems ‘Nityotsava’, ‘Kurigalu Saar Kurigalu,’ which still lingers on every Kannadiga’s lips, even after 60 years.