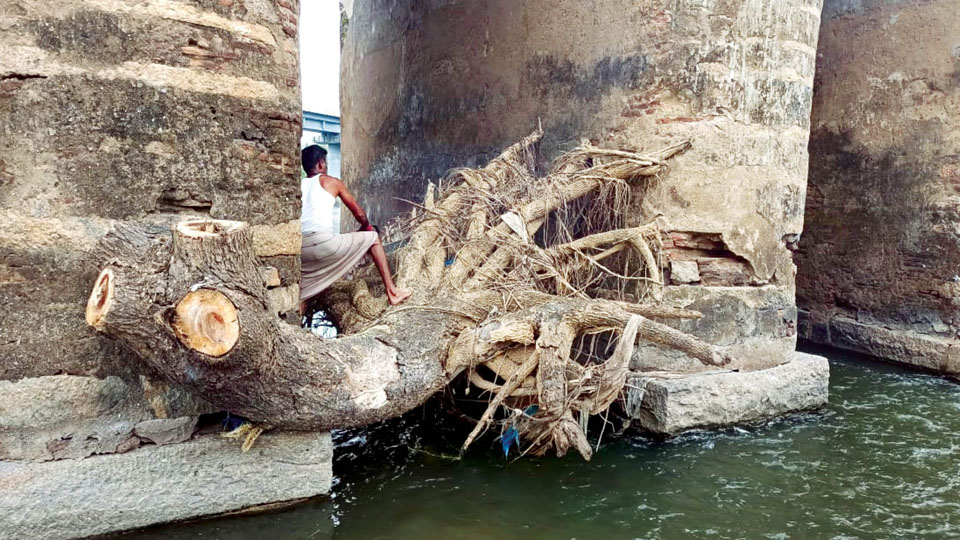 Trees cleared from 10 piers of Heritage Bridge over Kapila

The Heritage Rail-Road Bridge across River Kabini or Kapila at Nanjangud, which is reckoned to be more than 280 years old and one of the oldest bridges in the country, has been conserved in their own way by Yuva Brigade by removing huge tree trunks that were stuck under the piers following floods last year and the year before last.

The huge tree trunks were colliding against the piers due to the force of water and there was a danger of the wood damaging the heritage structure. Already some bricks of the bridge and piers have given away.

The tree trunks with considerable girth were heavy and were stuck in between the piers. Due to the sheer size of the trunks, it could not have passed the piers. Instead, it was moving back-and-forth as the water level increased or decreased. In the process, the tree trunks used to hit the piers causing a perpetual thud sound, said Chandrashekar, Convener of Mysuru Yuva Brigade.

The bridge was constructed in the 1730s by Dalvoy Devaraj, a local chieftain and a Railway track was laid over it when the metre-gauge link connecting Mysuru to Nanjangud was laid and commissioned in 1899. When East India Company Officer Reven Squadj came to meet Haider Ali at Kalale village where he was camping at, he visited the bridge and certified that Dalvoy Devaraj built the bridge in 1735. In his noting, Reven Squadj was full of praises for Dalvoy Devaraj for building such a strong bridge.

This engineering marvel was built in Gothic style and is unique in design as it accommodated metre-gauge Railway line parallel to road traffic. The bridge measures nearly 225 meters in length and has 54 piers. It served the people from 1735 to 2007. Before 1902, the bridge was used by bullock carts, horse carriages and travellers. After one-and-a-half centuries, the metre-gauge railway line was laid and the bridge became a point of convergence for both rail and carriage traffic.

Subsequently, new bridges were built in 2007 and broad-gauge line was laid there. Consequently, this particular bridge was discontinued to be used. The last metre-gauge train that ran over the bridge was on Jan. 17, 2007. After that, it was closed to traffic.

Flood water does the damage

Considering the need of conserving this rail-road bridge for posterity given its heritage status, the Yuva Brigade has been clearing bushes and vegetation growth on the structure and plastering damaged piers since the last six years. Since the last two years, the Kapila River used to be in spate whenever more than 80,000 cusecs of water from Kabini Dam is released following an increase in the water level in the Dam due to heavy rains in the catchment area in Kerala.

Following the water release, trees on the banks of the river were uprooted,  washed away and were stuck in the 10 piers of the heritage structure. “The huge tree trunks were damaging the 10 piers causing considerable pressure. We had to wait till this April for the water level to recede,” Chandrashekar said.

Volunteers of Yuva Brigade assembled under the bridge on Sunday (April 18) at 7 am and first used automatic saw to cut the tree trunks into smaller units so that they can be shifted out from the piers. Though the task of climbing the tree trunks to cut it was risky as it was slippery, this did not deter the Brigade volunteers and they accomplished the task successfully. By 6 pm on Sunday, all the 10 piers were cleared.

Over 10 volunteers were involved in the task and they spent Rs. 2,050 for the task that gave them immense satisfaction though it was back-breaking work. “We hired cutting machines and bought petrol and oil. Now only the bamboo have to be cleared,” he added. Taluk Yuva Brigade Convener Sunil, volunteers Charan, Arjun, Srinivas, Bhaskar, Girish, Kishore and Rangaswamy participated.