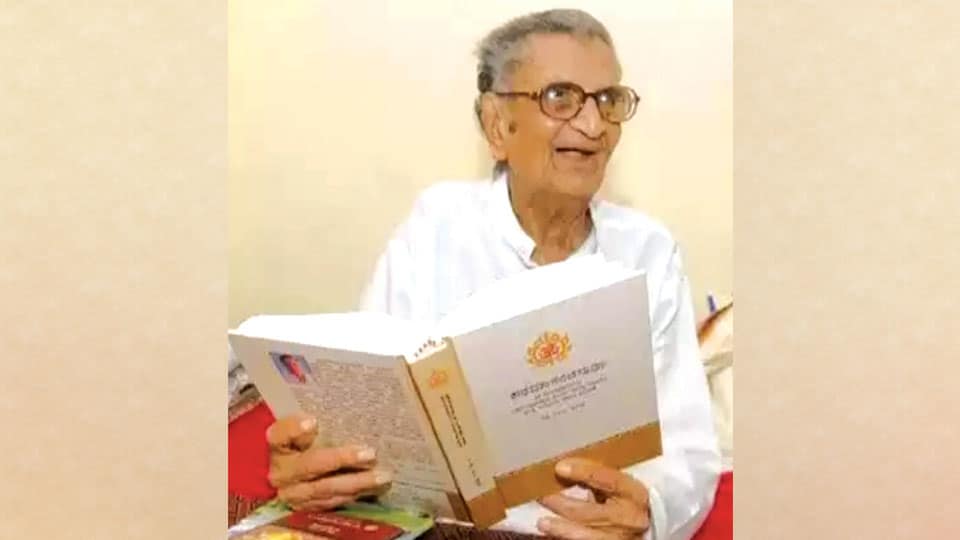 Pandit Sudhakar Chaturvedi, who was a close confidante of Mahatma Gandhi since 1915 and involved in India’s freedom struggle, passed away yesterday (Feb. 27) morning, at the age of 121, at his residence in Jayangar 5th Block, Bengaluru.

A centenarian freedom fighter, vedic scholar and a former journalist who had witnessed the Jallianwala Bagh massacre, Sudhakar Krishna Rao was better known as Pandit Sudhakar “Chaturvedi” since he was well-versed in all the four ‘Vedas.’

He was being looked after by the daughters of Arya Mitra who was the former Deputy Commissioner of Mysuru.

Born on Rama Navami day on  Apr. 20, 1897, there was a grand plan to celebrate his birthday this Rama Navami, but the fate willed it otherwise.

Sudhakar Krishna Rao was born in Tumakuru’s Kyathasandra. When he was in School, Sudhakar Chaturvedi moved to Haridwar under the guidance of his father to join the Arya Samaj. Known as “Postman to Gandhi,” several reports claimed that Gandhiji fondly called him “Karnataki.”

Sudhakar Chaturvedi was deeply influenced by the Vedas and the teachings of Swami Shraddhanand. In his youth, he joined a newspaper named ‘Vijay,’ which was run by Swami Shraddhanand. Sudhakar Chaturvedi is believed to have been deployed for reporting at Amritsar when he witnessed the Jallianwala Bagh massacre on April 13, 1919, which killed 379 Indians. His eyewitness account of the massacre is documented in the Kannada book by N. Nagalaxmi, titled ‘Shataayushi Pandita Sudhakara Chaturvedi.’

It was a strange association because while Sudhakar Chaturvedi was a Madhwa Brahmin  and a staunch Arya Samajist, Gandhiji was a committed Sanathanist but their relationship transcended their belief systems to join hands in the common cause of fighting for India’s independence.

Sudhakar Chaturvedi learnt four Vedas, Darshana Shastras through Gurukula System of education at Kangdi. He stayed in Sabarmati Ashram and probably he was the only person who had no hesitation in pointing out to Gandhi whenever he (Gandhi) made a bad judgement.

While he was residing at the Sabarmati Ashram with Mahatma Gandhi, Chaturvedi was jailed for taking part in the Khilafat Movement. This has been brought out in the book he wrote in Kannada titled  ‘Halavu Nenapugalu.’

In writing this book, the primary help was the material gathered by N. Nagalakshmi and N. Balasubramanyam. The collected material for the book has been suitably refined by Prof. L.S. Seshagiri Rao and Prof. N. Geethacharya with a foreword by G. Venkatasubbaiah. It also includes a brief write-up in English under the title ‘Reminiscences of a Centenarian’ by Prof. L.S. Seshagiri Rao. The uniqueness of the book is its authenticity because it is an eyewitness account. It is a fascinating account of freedom struggle and part played by various political personalities.

I have translated 30 episodes from the book into English. I have not seen any account of it to my knowledge in any other book or other mediums. Everyday, I listen to the 5-minute radio programme ‘Gandhi Chintanamale,’ by various persons and there is no mentioning of this book or its content.

My wife and I visited Sudhakar Chaturvedi on many occasions. The  last meeting with him was when Chaturvedi performed a homa on Feb. 16, 2019. He used to perform homas, religiously, every Saturday at his house. May his soul rest in peace.