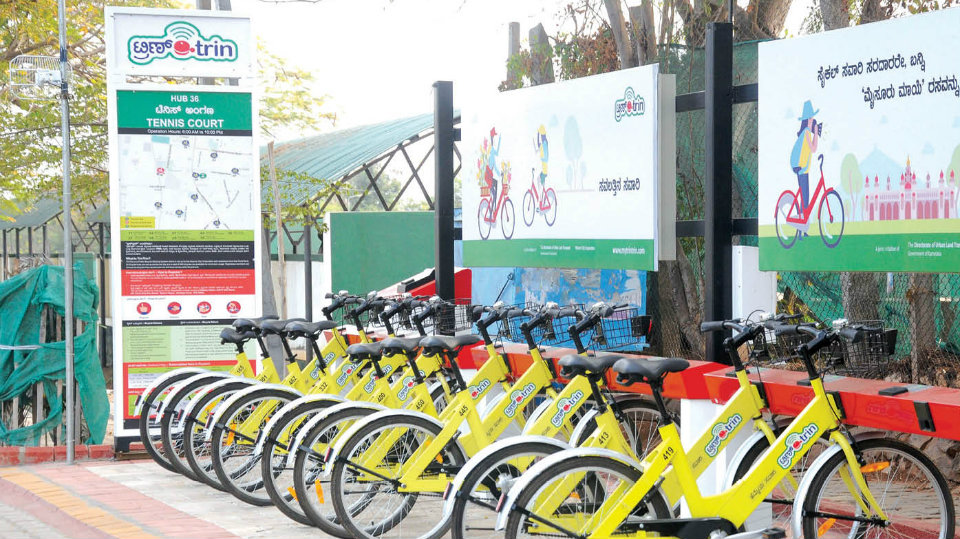 Mysuru: Public Bicycle Sharing (PBS) system ‘Trin Trin,’ introduced 18 months ago has become popular in city with 11,000 people becoming members and covering 11 lakh kilometre distance so far with about 1,200 people using the facility daily. About 40% of school and college students are using the cycles as a mode of transport thereby reducing pollution. ‘Trin Trin’ was launched on June 4, 2017 for the first time in the country. The facility was introduced by Mysore City Corporation (MCC) in association with City Surface Transport Directorate with funding by World Bank and maintained by ‘Green Wheel Ride’. Right now, 450 cycles are provided in the facility, 30 of which are geared cycles which are kept at the docking centre at the foot of Chamundi Hill to facilitate uphill riding. There are a total of  52 docking stations set up across the city.

PBS Electronics and IT Section Manager S. Bhushan says, cycles are of best quality each bearing a number to facilitate tracking and kilometre run and replacing worn-out parts. He adds that 11 lakh km of running cycles has brought down carbon-dioxide emission by about 100 tonnes and helped reduce temperature and pollution.

Trin Trin Usage: Six centres have been opened in city to register membership which can also be done at ‘Mysore One’ Centres. The registration fee is Rs. 360 which includes a refundable deposit of Rs. 250 and a processing fee of Rs. 50.