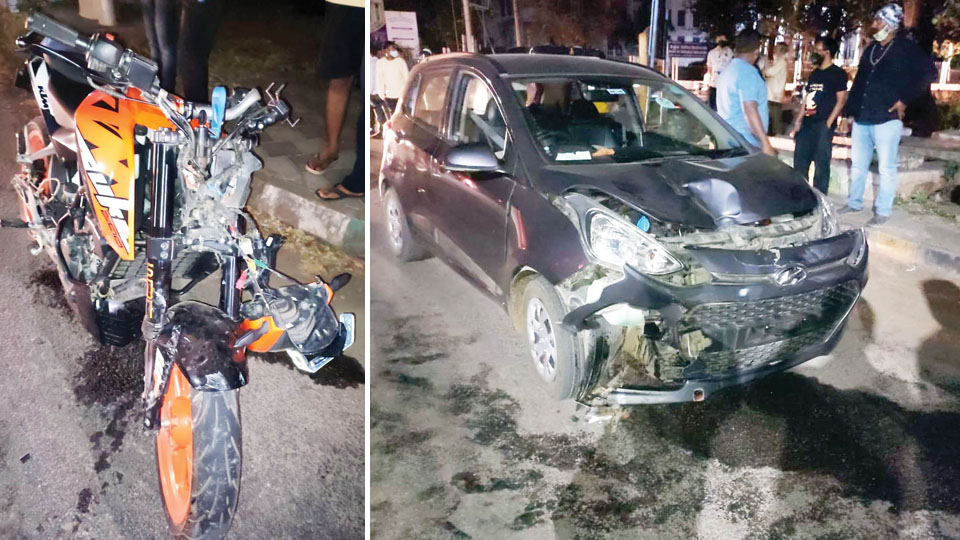 Two injured; they were not wearing helmets

Mysore/Mysuru: A 22-year-old youth lost his life in a bike-car collision near Kukkarahalli Lake last night. Three youths were riding triple on a high-end bike and according to the Police and eye-witnesses, the bike was moving at a great speed and all the three were not wearing helmets.

The incident occurred on the Kukkarahalli Main Road near Thippaiah Circle (a few metres from the All India Institute of Speech and Hearing – AIISH) at around 7.30 pm. Abhilash, a native of Benchahalli near Nanjangud, Harsha, a resident of Paduvarahalli and a native of Belagavi and Rakshit, a native of Madikeri and a resident of Saraswathipuram were returning after having dinner at a friend’s place in Bogadi.

Police said that all the three youths were working at a vehicle showroom and they were on the bike (KA-12-U-0162) owned by Rakshit. As yesterday was the weekend curfew, the showroom was closed for two days and the friends planned a get-together at another friend’s place at Bogadi.

The bike was proceeding from Bogadi to Paduvarahalli and it collided with the car (KA-09-MC-8663) driven by one Impu near the turning at Thippaiah Circle. Rakshit was riding the bike, said the Police.

The youths were overspeeding and the Police said that the impact of the accident was such that the bike was flung up along with the youths and the machine crashed onto the ground.

Abhilash, who was sitting in the middle, died on the spot while Rakshit and Harsha were seriously injured.

Krishnaraja Traffic Inspector Manjunath and staff rushed to the spot and shifted Rakshit and Harsha to a private hospital where they are said to be out of danger. Abhilash’s body has been shifted to MMC&RI mortuary for post-mortem.