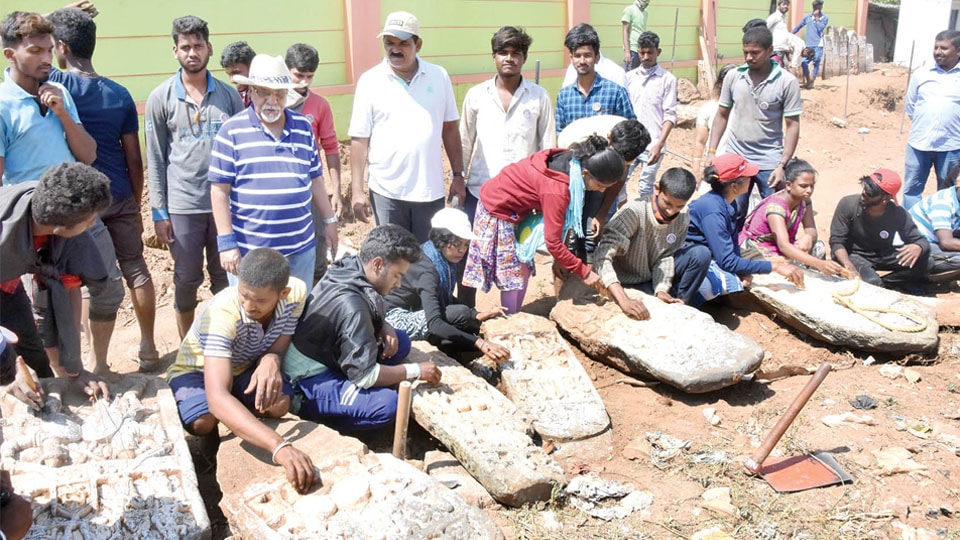 Hero Stones (Veeragallu) and Masti Stones (Mastikallu) are unique stone monuments found across India, particularly in Karnataka. These stone carvings speak volumes about life and living in those bygone eras.

These stone monuments may or may not have any inscriptions at the bottom. Defending village, border, cattle and women, battle as well as hunting are the most commonly found themes in these stone monuments. For example, a 10th Century Hero Stone at Begur in Bengaluru elucidates the techniques and strategies in a battle, which is considered as the best Hero Stone available in India.

A team of NSS students have taken up restoration work of 70 Veeragallu and Mastikallu, believed to be from 10th to 14th century Hoysala Dynasty. As part of their NSS camp, students of Kuvempunagar First Grade College in city, who have camped in Jayapura village of Mysuru taluk since Jan. 28, are trying to restore stone monuments which were scattered around Gujjalamma Temple in Jayapura village. These Hero Stones were discovered during a similar NSS camp conducted by the same college in the year 2014-15.

Five years after the discovery, these enthusiastic students have again taken up the arduous task of restoring these Veeragallu and Mastikallu which had been buried under the mud again at the temple premises.

Speaking to Star of Mysore, Prof. N.S. Rangaraju, Member, Expert Committee for Development and Protection of Mysore Heritage Region and Convenor, INTACH (Indian National Trust for Art and Cultural Heritage) said, “These stones belong to various periods including Hoysalas, Vijayanagara Empire and Mysore Wadiyars. These monuments are made of soap stones. Out of these 70 monuments, none of them have any inscriptions. It seems that there were many heroes in this region around Jayapura village during that period.”

Kuvempunagar First Grade College Assistant Professor and NSS officer Dr. S.G. Ramdas Reddy said, “Under the guidance of our Principal Dr. Ragini, we conduct NSS camps every year.  We try to select a historically significant village. This year, we are restoring these monuments, which were discovered in 2014-15. Villagers are also cooperating with us and helping our students. We are now keeping these valuable monuments around the temple in a well-preserved condition.”

Villager Chikkanaga Nayaka said, “20 years ago, we had discovered copper plates within an earthen pot (hosagumbe) when we were digging earth for construction of Konappa Temple. We are now offering puja to these copper plates in the temple.”

The most recent historical novel by Kannada author Vasudendra, ‘Tejo Tungabhadra’, lucidly depicts the life of common man during Vijayanagar period. The novel vividly depicts the act of ‘Penbuyyal’ (death while protecting the modesty of women in distress). Interestingly, ‘Penbuyyal’ stone monuments are found abundantly in many regions of Karnataka.