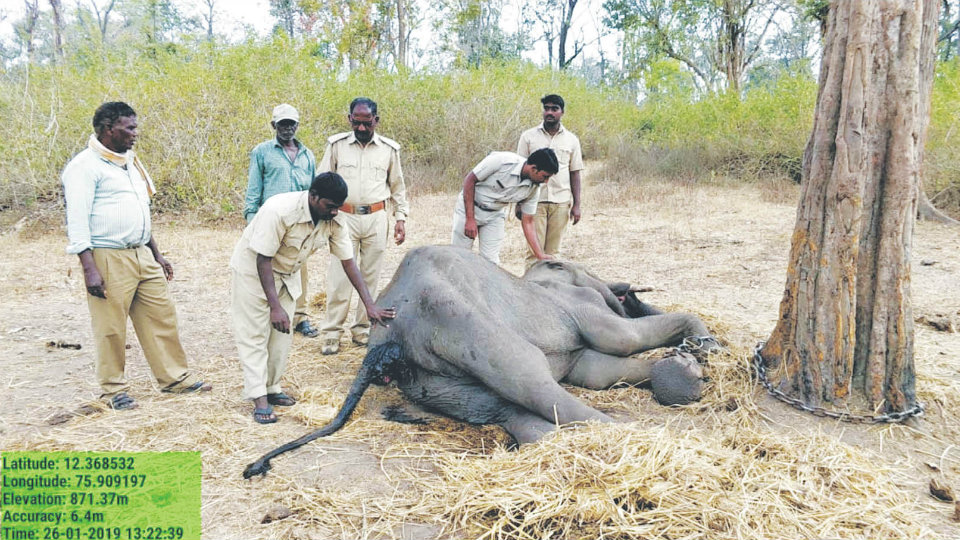 Elephant skin not so thick after all…

Kushalnagar:  Karthik, a nine-year-old male elephant at Dubare Elephant Camp in Kushalnagar, which had mauled two mahouts to death last year, is dead.

Karthik, the calf of elephant ‘Vijaya’ of the camp, had killed Mahouts Annu and Mani. On Jan. 13, he had also attacked Mahout Naveen and worker Chandru, leaving them seriously injured. Naveen had to undergo an intestinal surgery.

Naveen has been discharged from hospital now and the Forest Department has paid Rs 2.5 lakh for Naveen’s operation. After the incident, Karthik was kept in isolation and was tied with chains, in an attempt to control his aggressive nature.

The pachyderm’s post-mortem was done by Dr. Mujeeb. Explaining the cause of death, officials said the elephant was stung by forest bees but nobody was aware of it. The bees had stung the jumbo on its rear. It was when Karthik attacked his mahout two weeks ago that they realised the jumbo was unwell and in pain because of the sting which had got infected by then. The wound was treated by experts. But Karthik never recovered.