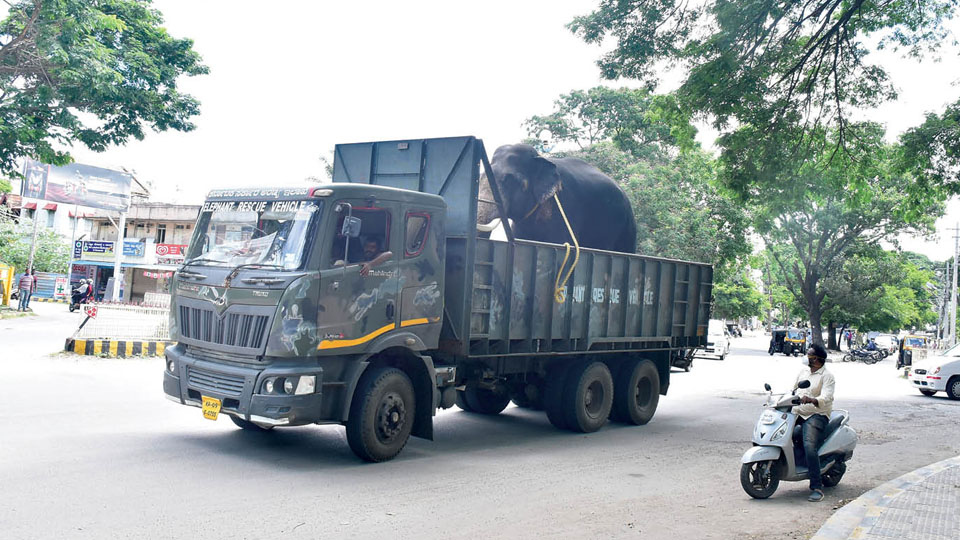 Mysore/Mysuru: Three months to go for the annual Dasara celebrations in Mysuru and at a time that there are indications that this year too Dasara would be scaled down thanks to the threat of COVID third wave, the appearance of an elephant on top of a truck in the heart of Mysuru city last evening gave a nostalgic feeling to residents.

Seeing the elephant on the truck — an elephant rescue vehicle —passers-by paused for a moment to stare at the majestic appearance of the pachyderm. Even vehicles stopped to have a look at Vikram who was being transported to Rampur Camp at Bandipur.

Elephants on trucks are an annual phenomenon in Mysuru and over 12 elephants are brought on trucks from various elephant camps managed by the Forest Department. People cheer the pachyderms including experienced tuskers and the Howdah Elephant as they arrive as part of the Gajapayana (elephant march from the forests to the city).

People bid them goodbye after each celebration and again, the elephants are transported in trucks back to the elephant camps. Last evening at around 3.15 whoever spotted Vikram on a truck passing through JLB Road, Ballal Circle and Ooty Road recollected Dasara memories and for a moment wondered what was happening.

Vikram is the Pattada Aane and he participates in the events conducted by the Mysore royal family including the Khas Durbar as part of the Navarathri festivities. Along with seasoned elephants like Arjuna, Abhimanyu and Harsha, Vikram too is an expert in wild elephant capture operations.

As such, he was taken from Dubare Elephant Camp in Kodagu District to Rampur Elephant Camp near Bandipur. Sometime back, he was taken to Ramanagara and Hassan to capture rogue elephants and now he will be at Rampur, said Assistant Conservator of Forests (ACF) Hediyala Division M.S. Ravikumar.

Speaking to Star of Mysore, he said that 13 elephants are being trained at Rampur Elephant Camp. “These elephants that are under training have not yet accustomed to human presence, movement of vehicles. They have to be trained to shed fears so that they can be made fit to be used in tiger capture operations. We are also training them to lift wooden logs and climb trucks without hesitation. As Vikram and Dhananjaya are experts in such tasks and operations, they have been brought to Rampur,” he added.

At the Rampur camp there are seven male and six female elephants and Dasara elephant Jayaprakash is the lead elephant with other companions Chaitra, Lakshmi, Parthasarathi, Ganesha, Rusma, Rohit, Aishwarya, Nisarga, Bhaskar, Nugu, Kapila and Marisha. Among them Ganesha is a new combing expert.

“We were training them with the help of tuskers Arjuna and Gopalaswamy. Now as there is their requirement in Hassan for wild elephant operations, we are shifting them there and they are replaced at Rampur by Vikram and Dhananjaya. Also, Mahouts and Kavadis are being trained,” he said.

Vikram reached the Rampur Elephant Camp near Moolehole Range of Bandipur Tiger Reserve in the evening. Interestingly, the Rampur camp is located amidst natural forests and rarely there is human contact, except for Forest Department staff.