The male and the female Anacondas, which arrived from Sri Lanka National Zoo by Sri Lankan Airlines at Kempegowda International Airport in Bengaluru, on Apr. 28, were received by the Zoo Veterinarian and animal keeper, who safely transported them by road from Bengaluru to Mysuru. At present they have been kept in quarantine enclosure in the city zoo.

Each Anaconda is aged about four years and eight months, weighs up to 15 kgs and is about six to eight feet in length. It may be recalled that in 2011, Mysuru Zoo received five Green Anacondas from the same Zoo.

After a gap of nearly seven years the Mysuru Zoo is receiving six anacondas (three males and three females) which have been approved by the Central Zoo Authority (CZA) of India. 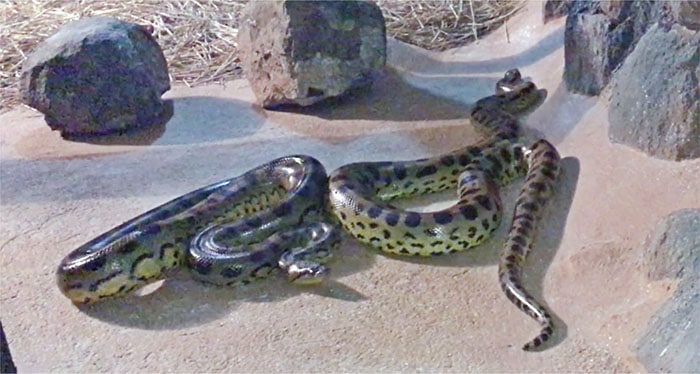 According to Ravishankar, the Mysuru Zoo has added various species of animals and birds to its collection since the last two months to pair single animal and to enrich approved animal collection plan.

The following are the animals and birds received. Two female Ostrich, a pair of Scarlet Macaw,  two pairs of Mandarin Duck, one pair of Lesser Sulphur Crested Cockatoo, one pair of Green Winged Macaw, one pair of Meerakat, two female Tufted Capuchin,  a pair of Marmoset and one pair of Red Billed Toucan. The pairs include male and female.