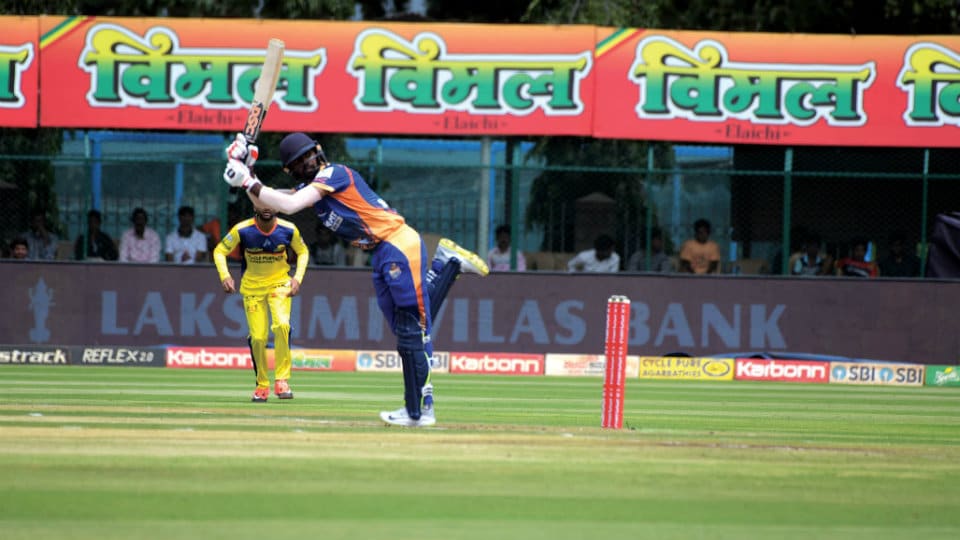 After winning the toss, Vinay Kumar, the Captain of Hubli Tigers, decided to bat first. Opener Mohammed Taha (68) was in a destructive mode and capitalised the field restriction during the powerplay. Mohammad Taha 68 (47b,14×4,0x6) was well supported by good cameos from Sujit N. Gowda (31) and Captain Vinay Kumar (30). Hubli Tigers posted a good total of 182 for six in their allotted 20 overs.

In reply, the home side, Myusru Warriors got off to an exceptional start, reaching 53 runs in 5 overs. Arjun Hoysala scored a brisk 31 off 18 deliveries that had a couple of hits to the boundary and three huge shots over the ropes. But the introduction of spinner Suraj Seshadri (three for 24 in three overs) turned the tables for Hubli Tigers.

Mysuru Warriors collapsed to 91 for 5. With half the team into the hut, Shoaib Manager (58) had to take the responsibility to be in the hunt. He was calm as the wickets kept falling at the other end. Shoaib Manager 58 (31b,4×4,4×6) seemed as he would take the Warriors Home. But in the 19th over of the game, he was dismissed after hitting a couple of sixes in the same over to M.B. Darshan. The match went on to the last ball, of which 4 runs were required.

S.P. Manjunath was caught by Mahesh Patel off the bowling of Kranthi Kumar. Kranthi Kumar bowled a slower ball and the slice from Manjunath went straight into the hands of Mahesh Patel who was positioned at short third man. The crowd was stunned as the Blue Hubli Tigers restricted Mysuru Warriors at 179 for 9 in 20 overs.

A wonderful innings by Naga Bharath (72 n.o.) ensured a superb last ball victory for Bijapur Bulls as they beat Bellary Tuskers by two wickets in the KPL-2018 tie at the SDNR Wadiyar Stadium in the later half of the evening.

Earlier, Bijapur Bulls won the toss and put the opposition Bellari Tuskers into bat. Openers Codanda Karthik (45) and Rohan Kadam (52) started the innings on a positive note. Within no time the Tuskers reached to a score of 60 in 6 overs. The Introduction of spinners K.C. Cariappa (3 for 11) and K.P. Appanna (2 for 15 in 3 overs) led to a collapse with none of the other batsmen reaching double figures except for Devdutt Padikkal (22). The Tuskers managed to reach the score of 152 for 9 in 20 overs. 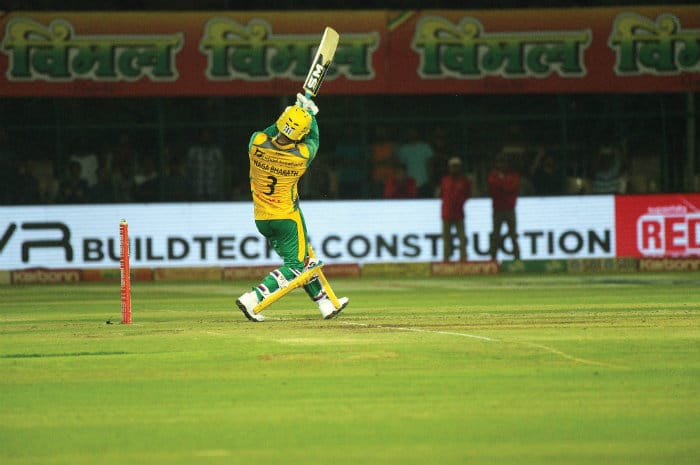 In reply, the Bijapur Bulls got off to a decent start. Captain Bharath Chipli scored a quick cameo of 27 runs in 14 balls, while the other opener played a gritty knock of 31 runs from 31 balls. Ritesh Bhatkal (2 for 20) and S. Akshay (3 for 30) managed to pull things back in the favour of Tuskers.

As wickets kept falling at one end, it seemed like Naga Bharath 72 n.o. (46b,6×4,2×6) was batting on all together different wicket. He paced his innings exceptionally. Initially he started rotating strikes, picked the gaps and ran harder between the wickets. And when the situation demanded, he rose to the ocassion and turned on the aggressive mode. He executed brilliant drives, square cuts and pull shots. With six required off the last ball, Naga Bharath smashed the cherry out of the park.

Karthik bowled a high full toss above the waist and Bharath swiveled across the wicket and heaved it long over the backward square. He was all joy and seen pumping his arms in the air as the entire team ran in to join him in the celebration.