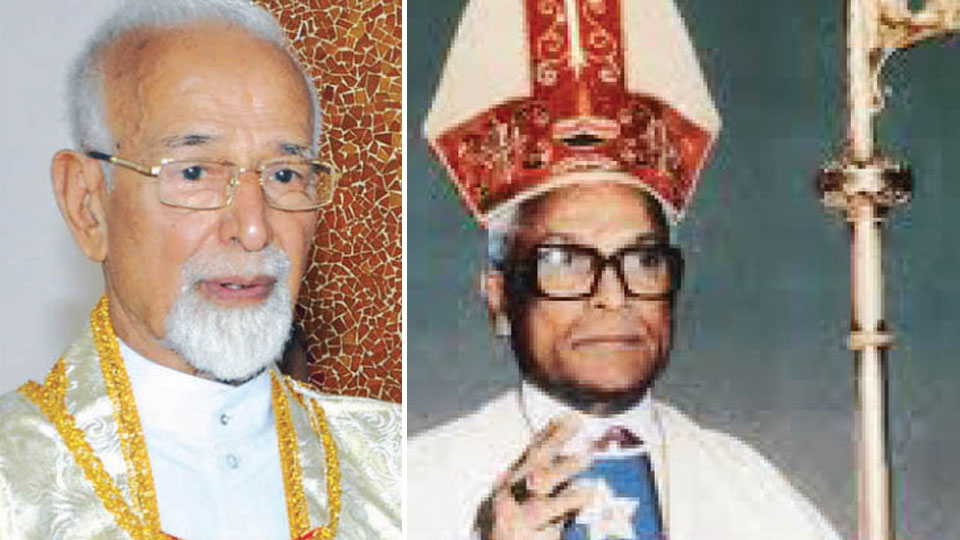 Two Keepers of the Holy Cross !

The recent passing away of Fr. Denis Noronha, a very well-known catholic priest of the Mysuru Diocese, brings to my mind snippets of my very long association with him as I started my education and completed it right up to the B.Sc. level, entirely in Christian educational institutions in Mysuru. But I would like to narrate here one incident with which he was associated, albeit in a small way, because I feel that it stands out as being very unusual.

One of the former Bishops of Mysuru, Rev. Fr. Mathias Fernandes, who has served the longest in the post so far, was very close to me because I happened to know him from the time I was a five-year-old boy when I began my schooling in the Good Shepherd Convent which he used to visit very often. He used to be driven around by his ageing driver in his dull green Austin Cambridge car which at that time was as well-known as he himself was all over the city. He was a very tall man with a stately and rather grim looking personality but he could be very witty when you least expected him to make a wisecrack!

He was also a very warm-hearted and sensitive person whose hallmark was his readiness to help anyone who happened to approach him for any kind of assistance at any time of the day or night. Even to this day there are many people in and around Mysuru who are beholden to him for his magnanimity.

As a young boy I had developed a great liking for him which perhaps was the result of his ready interaction with all school children and I would always rush to receive him whenever he visited any of the schools where I studied. When he fell ill with high fever and chills in the year 1985 and was admitted to the newly-established, two bed ICU of the K. R. Hospital under the care of Prof. N. A. Jadhav, who was the Head of the Department of Medicine, I was an exam-going post-graduate student. Because my professor knew that I was very close to the Bishop, he asked me to take the responsibility of looking after him round-the-clock to which I readily agreed.

At that time, being one of the senior-most priests, Fr. Denis Noronha was holding an important position in the Bishop’s House and he was, therefore, the person who was overseeing the Bishop’s treatment. On the second day of his admission when I had to perform a minor invasive procedure on him, the Bishop removed the heavy gold and silver Cross that he always wore around his neck on a thick silver chain and handed it over to me saying, “My son, this is a very sacred object for me and I don’t want it to be sullied during my stay here in the hospital. So I want you to please keep this carefully with you in a safe place and give it back to me at the time of my discharge or in the event of my death, which seems very likely, I want you to hand it over only to the person who becomes the next Bishop after me.”

While assuring him that I would keep his Cross in safe custody, I held his hand in mine and almost jokingly reassured him that he would soon recover from his illness and once again wear his Cross around his own neck and go about doing his usual work! He smiled and clasped my hand tightly in both his hands and said softly, “You doctors always sound so confident but an inner voice tells me that I may have developed sepsis and I may not recover from it. Believe me; the possibility of my dying is very high and so you while you do your best to help me recover which I know you will, please keep the Cross very carefully in a safe place as I have a feeling that you will be keeping it for some time to come.”

The next morning when I told Fr. Noronha upon his arrival at the hospital that the Bishop had entrusted his Cross to me for safe-keeping, he too asked me to retain it for the time being. While my words to him did not come true, the Bishop’s words to me did and despite our best efforts to save him, his condition gradually deteriorated over the next few days and he drifted into a comatose state from which he never recovered and he died of septicaemia peacefully on 9th, May, 1985. Incidentally, he was the first patient for whom we used the newly-acquired ventilator which was the first such device to arrive in our city.

On the third day after his funeral, I met Fr. Noronha at the Bishop’s House and asked him what I should do with the Cross in my custody. He said that he had discussed this issue with a few other senior priests and they were all of the opinion that since it was the last wish of Bishop Fernandes that I should hand it over only to the next Bishop of Mysuru I should do exactly that. So the Cross went from my table drawer to my father’s locker in the Syndicate Bank located bang opposite the Bishop’s House and stayed there for exactly two-years-and-twenty-two- days for that is how long it took for Rev. Fr. Francis Michaelappa’s name  to be announced by the Vatican as the next Bishop of Mysuru!

The day after he assumed office, I went to the Bishop’s House in the company of Fr. Noronha, Fr. Joseph Roy and Sr. Margaret of the Avila Convent and insisted on placing the Cross myself around his neck! He smiled and bowed his head low to allow me to do that and  that was how a young Muslim doctor safeguarded a Holy Christian Cross for two long years and in a quaint sort of way ‘anointed’ and ‘appointed’ a Christian Bishop to his noble post!

But the best and undoubtedly the most interesting part of the unusual story of the mysterious second keeper of the Holy Cross of Rev. Fr. Mathias Fernandes and his unmatched magnanimity is yet to come. Please ‘stay tuned’ to read about it in my next week’s article!