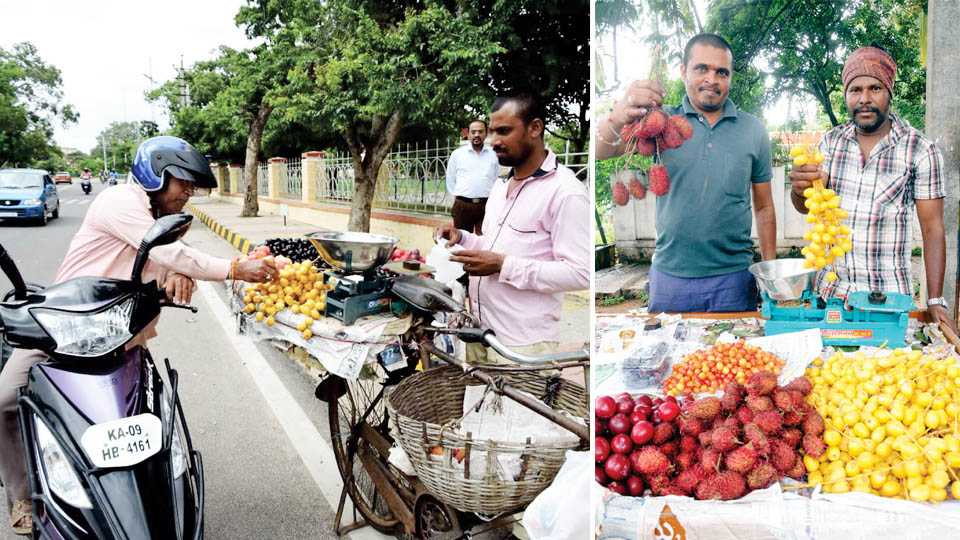 Fruits have been an intrinsic part of our diet from time immemorial. Apart from a variety of wild fruits, there are several types which have been grown methodically by human beings from ages. Every kind of fruit boasts of incredible health benefits and can be consumed by people of all ages.

Mysuru with its temperate and mild climate is a treasure trove of various kinds of seasonal fruits and Mysureans indulge in fruit-shopping with all the inquisitiveness. We are all familiar with the dry Dates which we all have tasted in its ripened form which is brownish, soft and sticky sweet, but raw Dates, the new arrival also known as ‘Hasi Kharjura’ or ‘Yellow Raw Dates’, have started to tickle the taste buds of the localites and is fast becoming the most sought after fruit in Mysuru.

This season, Mysureans can lay their hands on these exotic fruits. They are not only crunchy and juicy but also loaded with health benefits. It has a hard crisp texture, yellow colour and combined taste of apple and pear with mild sweetness.

The Raw Yellow Dates are a native of Arab, also known as Barhee. Once known as a desert fruit, it is now being grown in India in the dry areas of Tamil Nadu and Rajasthan. This attractive looking fruit is being sold by a few street vendors near Crawford Hall, Panchvati Circle on Kalidasa Road and near Mannars Market in city.

“Earlier, I used to sell only plums and Ooty apples but now I am selling Yellow Raw Dates (Hasi Kharjura). Before buying most people ask me as to what it actually is and I educate them about it as many people are seeing this fruit for the first time,” says Mahadeva, a fruit vendor at Panchvati Circle.

With the first week of being introduced in the city, it was being sold for Rs.400 per kg and now they are available for Rs.200 per kg. Yellow Raw Dates are seasonal and are available between July and August. The Yellow Dates have an extremely short season and best used immediately, season lasts for about a month. Last year too, the fruit was available around the same time along with the Red Raw Dates.

READ ALSO  A Ride of Royalty

“I came across the  Raw Dates for the first time and I was tempted to buy, the vendor made me taste it and also said it carries a lot of health benefits,” quoted Kempegowda, a local resident who was seen tasting the fruit before buying near Crawford Hall.

Yellow Raw Dates can also be called as a super fruit because it contains nutritional perks as well. The health benefits of Raw Dates include easy digestion, relief from anemia, improved eye vision among many other benefits. They also make a better choice if you are trying to control your weight. They are rich in several Vitamins, Minerals and Fibre and contains iron, calcium, potassium, antioxidants, proteins and carbohydrates.

Health Specialists also say that eating one Date per day is necessary for a balanced and healthy diet.  “I am buying this fruit for the second time. The first time I saw the Yellow Dates I was delighted because this fruit is from my country. I am very health conscious and like mildly sweet fruits; raw Dates are one of my favourites,” said Hesham, a native of Yemen. He also adds that the prices of the Yellow Dates which he calls it as Barhee is much cheaper in his country.

Since the Yellow Date is an exotic fruit and is in demand the prices are slightly high. “I have started selling this fruit of late, the fruit is brought to Bengaluru from Rajasthan and Tamil Nadu and I travel to Bengaluru to get the fruits. Here I sell about 8 to 10 kgs of raw dates everyday,” said Shankara, another street vendor.

Dates being seasonal fruits are not available round the year. So pick as many as possible and satiate your craving for these crunchy and delicious fruits. You can either eat it as a snack, use it in your fruit salads or even cocktails. Along with a good supply of various vitamins and proteins these fruits are sure to inscribe your taste buds with their taste for a long time which are definitely worth trying.