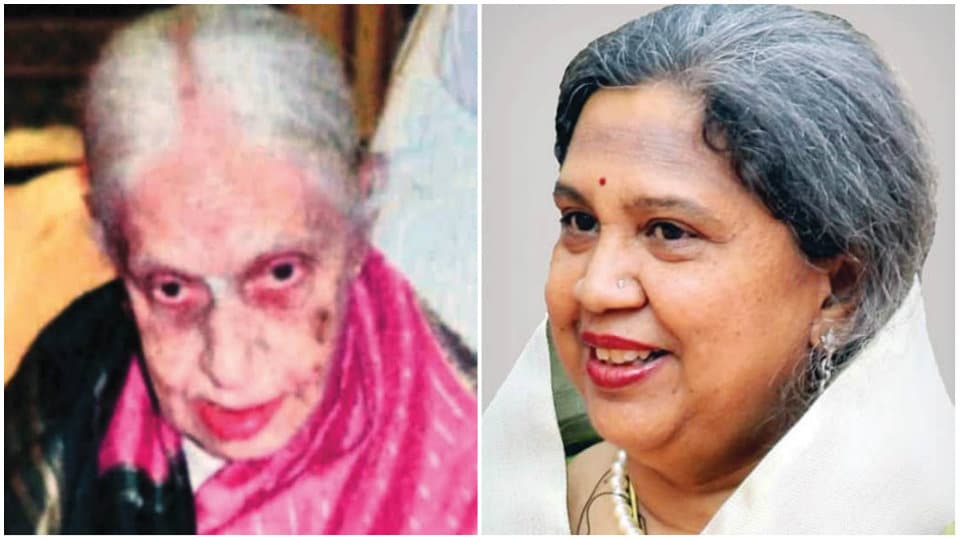 Mysuru: A pall of gloom descended on the members of the erstwhile royal family of Mysuru, the Wadiyars, on Vijayadashami, the tenth day of Dasara celebrations, as two from the family passed away yesterday (Oct.19).

First it was Puttarathnammanni (98), mother of Pramoda Devi Wadiyar, wife of late Srikantadatta Narasimharaja Wadiyar, who passed away early in the morning. Even as the news of her passing spread, the private celebrations of Vijayadashami by the royal family in the Mysore Palace stood suspended.

She died at a private hospital and later her body was brought to the Summer Palace adjoining the Mysuru Zoo, where it was kept for viewing to very close members of the royal family and others close to the family.

Pramoda Devi Wadiyar, who was in complete control of her emotions, oversaw all the funeral arrangements. Later, the body was taken to Madhuvana, the royal cemetery on Nanjangud Road where the last rites were performed by Pramoda Devi Wadiyar’s cousin’s son (from her father’s side) Shravan Kumar, who was staying with her mother.

Puttarathnammanni was ailing for quite some time of age related diseases. “She had shown signs of recovery on Thursday (Oct.18) and everyone hoped that she would pull through this time also. Hence, Pramoda Devi Wadiyar had even gone to see her ailing sister-in-law Vishalakshi Devi in Bengaluru. However, she breathed her last on Vijayadashmi day early in the morning,” said one of the members of the royal family, speaking to Star of Mysore.

Puttarathnammanni was the eldest daughter of Tripurasundarammanni and Sanjeev Raj Urs. She was married to Venugopal Raj Urs of Chikkaramane, a branch of Bettada Kote family. Pramoda Devi Wadiyar was her only child.

Even as the funeral of Puttarathnammanni was completed, came one more blow to the family members. Vishalakshi Devi (56), the youngest daughter of the last ruler of Mysore, Jayachamarajendra Wadiyar and the youngest sister of the last scion Srikantadatta Narasimharaja Wadiyar, who was ailing for some time, passed away in Bengaluru at a private hospital around 4.30 pm.

Vishalakshi was married to Gajendra Singh Auwa. She leaves behind her husband and two children, Rudrapratap Singh and Shruti Singh, and grandchildren.

The body of Vishalakshi Devi was brought from Bengaluru to Mysuru this afternoon. The last rites were performed at Madhuvana with all religious rituals.

Both the deceased royal family members were given State funeral.

Yaduveer Krishnadatta Chamaraja Wadiyar has condoled the death of both his grandmother Puttarathnammanni and aunt Vishalakshi Devi.

It is with immense sadness that I inform you of the passing of my Grandmother, Smt. Puttarathnammanniavaru…

And in the evening he wrote about his aunt Vishalakshi Devi thus:  Dear Friends,

It is with deep sadness that I convey the passing of my Aunt, Princess Vishalakshi Devi.

…Like her father, she devoted much of her life to preservation of wildlife. Her contribution to this field was immense, having helped not only raise, but also restore several leopards back to their wild habitat. She also raised several elephants that are now at various elephant camps in the forest.

My best memories of our jungles are of time spent with her. My favourite memories are listening to her wildlife stories by fireside in Bandipur…