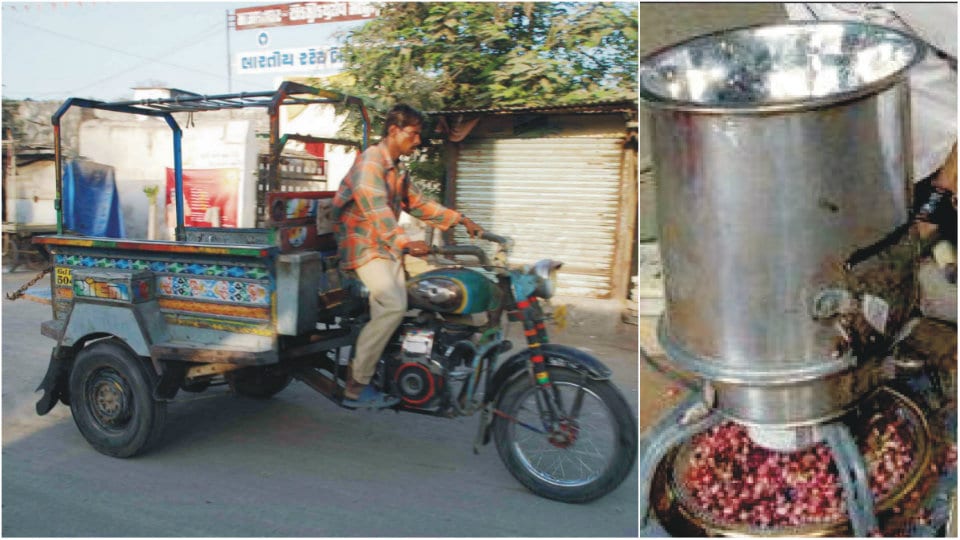 A typical solution for all problems “Jugaad,” a  colloquial Hindi and Punjabi word. Universally accepted. Funnily the interpretation or the meaning of the word jugaad means different to different people. For some it is an innovative fix, for some it is creativity with meagre resources, for some it is fixing of a problem bending rules, the list is endless…

Every time I go to Tirupathi, I make sure I fix things in advance to avoid the never-ending rush. And with jugaad made in advance, magically I am standing in front of the deity in one hour! Even when I was at the Lalitha Mahal Palace Hotel, I used to visit the Chamundeshwari temple after making the usual jugaad, fix the Police Chowki in advance to make sure my car went up to the temple premises. Vvip darshan too.  Jugaad does not spare even the Gods.   It has become the way of life and is accepted all over India as normal.

Up North, jugaad also is a name given to a locally manufactured motor vehicle, with a diesel engine and assembled with various parts taken from different scrapped vehicles. Very popular in Punjab, Haryana and UP. This assembled vehicle is a lifeline for  many a villages ferrying people, livestock, cattle and some times the agriculture produce too. There is a jugaad scooter too. Unique in its own way since no two vehicles              look the same !

The master of jugaad of course is none other than Dr. Uddhab Kumar Bharali, a real life Phansukh Wangdu, if one recollects the innovator in the movie 3 Idiots. This innovator has 140 innovations to his credit and many more on the pipeline. What are his simple innovations? 1. Passion fruit gel extractor, 2. Tobacco leaf cutter, 3. Arecanut peeling machine, 4. A garlic peeling machine, 5. A sugarcane chip-maker, 6. A casava peeler, 7. A trench digger, 8. A paddy sowing machine, 9. An incinerator  and many more.  All these  are manufactured using locally available  solutions and  mainly help farmers to reduce their workload.

Dr. Bharali, an engineering college dropout, of course has been rewarded with many awards  including the Shristi Sammaan Master Innovator Award in 2007, the President’s Grassroot Innovator Award in 2009, and the Meritorious Invention Award in 2011 by the National Research Development Corporation. His bench top pomegranate de-seeder and detention chair for the mentally challenged have also won him the engineering design contest organised by nasa Tech for the year 2012 and 2013.  A college drop-out, ironically he has been conferred the Doctorate of Science degree by the Assam Agricultural University !

Ironically, jugaad has gone international too. Open an Oxford dictionary and you find it. It is also being taught as a subject in top US Universities like Stanford and Berkeley. In France it has been accepted as part of many  elite management schools. Major companies like Apple, ibm, Renault have accepted this jugaad concept in their R&D.   Even African countries have accepted this concept and are practising it in their day to day life. In Philippines, an innovator invented a solar bulb costing only one dollar, using used plastic bottle! In Kenya somebody invented a bicycle which charges  cellphones while riding !

But there is an other side of jugaad too. The unpleasant side.  Take for example the film awards. It is now an accepted fact that all the so-called film awards and the reality shows are fixed. The top contenders  never win the show. In a recent interview, Rishi Kapoor recalled how he bought his first award for  his film “Bobby” to ensure increased box office collections. If one recollects there was a time  when Indian beauties continuously won all the beauty contests of the world. A sham. The sponsors of the beauty contest were big beauty product firms which ensured that the winners were from a particular country that year. The moment those products became popular in India, they moved on. Very rarely does one see a winner from a developed country.

The same fixing goes on in sports too. From cricket to boxing. Sometimes one is paid much more to lose a match than win!

When Modiji announced the demonetisation on 8th November, he did not realise the  power of jugaad. Small businesses in the unorganised sector closed their factories and sent all their employees to stand and change the old currencies to the new one in different banks.  The daily wagers were of course paid their salaries, not to work, but to stand in the queue and  exchange currency. By the time the rbi realised this loophole, thousands of crores had been exchanged and siphoned off. The moment indelible ink was introduced, the queue vanished !

Even the judiciary is not spared. There are bail specialists who can get  bail for a price, of course. Just one look at the chit fund scams, how is that our people get lured into such ponzi schemes in spite of the wide publicity given every time a scheme is  busted.  Adulteration and traffic violations are rampant. Why? The public at large starts believing that all these can be fixed at a price. These fixing has become so rampant in all the spheres of our lives we Indians have started to accept such jugaad as a routine. Every one indulges in this in some form or the other.

Is there a solution in sight?  The answer is a big “no” since every body firmly believes that a jugaad gets things done and ultimately that is what matters, even if it means bending the rules a little !