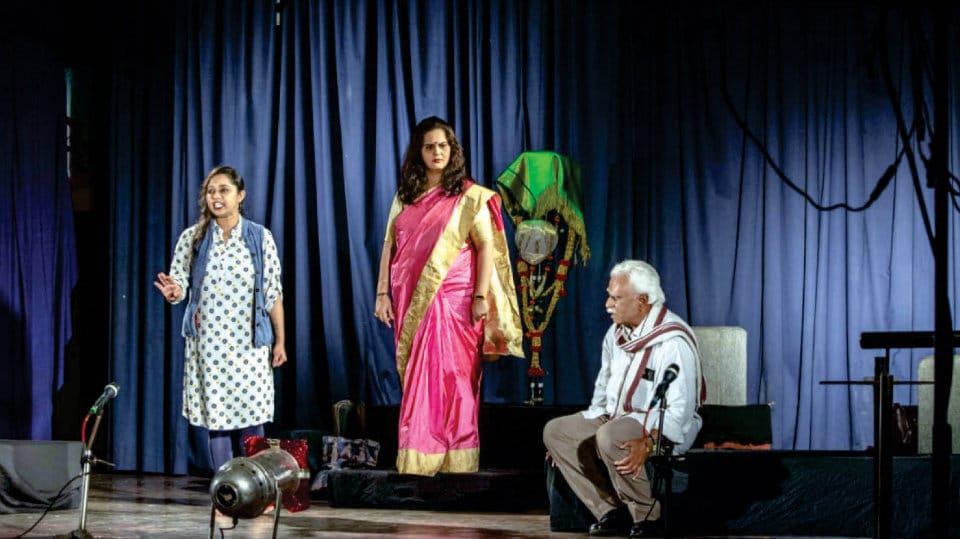 What is ‘Uchhishta’? It means left-overs. It is an effort to understand and appreciate the trials and tribulations of the young, burdened with the inheritance of the left-overs, a consequence of unethical life of the old. How people today live a false life in the name of sophistication is best brought out in the play.

The true picture of each character unveils with their soliloquy and dialogues. The mother reveals how the professor became inevitable for her when she had come away quitting her cruel husband from whom she suffered both physical and mental abuse. The professor not only gives her shelter, a good house and education for her child, but gets her a respectable job in the University, helps her get a doctorate knowing well that she has no merit and now she is to be recommended for the post of Vice-Chancellor! She knows that her daughter hates coming home as she is aware of the professor’s presence there which irritates her. She also remembers the day when her 3-year-old daughter witnessed her with the professor long ago which was hard for the child to digest. So the child naturally grows up with hatred for the professor.

The professor is now old and needs care, so he does not want to let go of the lady. But the girl needs her mother now as her future mother-in-law refuses to give her consent to the marriage unless her mother is out of her present relationship. Mother and daughter become one and implore the professor to allow them to  go away. The professor wants her not only because he needs her to take care of him but because he knows she has no identity of her own and wants to use her for his literary works, to establish a library of his works and thereby leave a legacy behind; all this is possible only with her on his side. So he threatens them with probable consequences — his wife asking for a divorce as she is no longer interested in taking care of him but only interested in his wealth and other rights which rightfully belong to her; the lady being held responsible for their divorce which will affect her job and her probable arrest as her PhD thesis is not her own but written by a student of the professor.  But the unmoved mother sticks to her decision and decides to quit the professor. He then tries to convince the daughter with his philosophical words saying the body is mortal after all and that her marriage may not be successful after all. The daughter’s words ‘she will face whatever is in store for her because she will at least have a respectable title ‘wife’ in the society’ are ironic.

The play was successful and effective not only because of the dialogues but also because of the crisp way in which it portrays the hard indigestible truths of today’s society, a society devoid of ethics but bound only by law.  Yes. The Supreme Court has said that if a man and a woman lived like husband and wife in a long-term relationship, the judiciary would presume that the two were married and the laws would be applicable. But the mother’s question ‘Should I approach the Supreme Court now?’ is haunting as many such Indian women would not go for it fearing their reputation. The audience leave the auditorium with deeply churned thoughts of what is right and what is wrong. Sethuram’s love for Tolstoy is seen in the play in his character of the professor who in all hypocrisy acts obedient and humble to his wife but wants to show himself powerful to the girl’s mother.

Music by Varijashree was outstanding and the lyrics (mostly vachanas) relevant. Varshini and Akshatha were as fluent as Sethuram himself in their dialogue delivery. The play is an excellent example of how powerful and successful a play can be even with the least characters and make up when you offer plenty of food for thought.