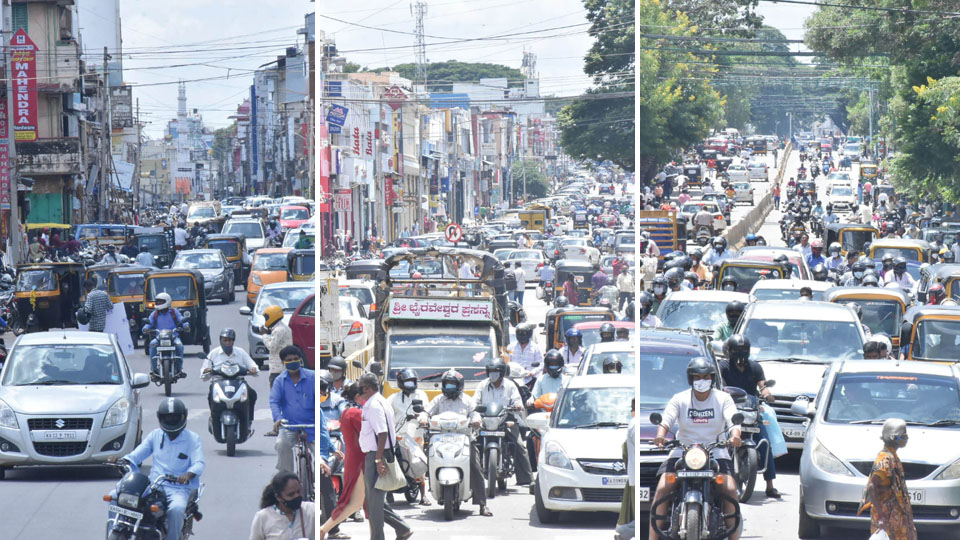 Mysore/Mysuru: After over two months, normal life resumed in Mysuru this morning after the State Government announced a further ease in lockdown restrictions under Unlock 3.0. Most establishments opened to 100 percent capacity after putting in place SOPs to ensure COVID-appropriate behaviour both from the staff and customers. People and vehicles flooded the streets while Bus stands, Railway Stations, roads and shops were brimming with people. As the day progressed, rush was seen at most shops throughout the city bringing a smile on the faces of traders.

Interestingly, women shrugged off the lockdown blues and thousands of them crowded the saree and garment shops. At one saree shop in the heart of the city, there were more than 3,000 women at various counters and a large number of them were waiting outside to get in.

As thousands of people and vehicles descended on the streets, several areas in the Central Business District witnessed traffic gridlocks and slow-moving traffic for hours. The Mysuru-Bengaluru Highway saw a high density of travellers with vehicles lining up till Srirangapatna.

Free movement as no barricades

On their part, the Police had removed all the barricades within the city and outskirts allowing free movement. Places of tourist interest in Mysuru like Mysore Palace, Chamarajendra Zoological Gardens opened. While the Palace, which was closed since April 24, was open from 10 am, the Zoo opened its doors at 8.30 am.

Except for theatres, cinema halls, swimming pools, markets and stadia, almost all venues opened up.

However, the closure of markets while all the other businesses were allowed to open irked vendors at Devaraja Market who resorted to a flash protest. They later withdrew the same and submitted a memorandum to the Deputy Commissioner citing loss of livelihood.

Temples welcomed devotees as early as 6 am and starting with the Sri Chamundeshwari Temple atop Chamundi Hill, all the prominent temples including Tripurasundari Jwalamukhi Temple, Srikanteshwaraswamy Temple at Nanjangud, Ganapathi and Trinayaneshwara Swamy Temple inside Palace premises, Bandanthamma Temple at Kuvempunagar,  Sri Lakshmivenkataramana Swamy Temple at Vontikoppal, Amrutheshwara Swamy Temple and Panchamukhi Anjaneyaswamy Temple on Irwin Road reported rush of devotees. Only darshans were allowed and no special pujas were performed.

At the Palace, entry tickets were purchased from the counters at the entrance gates. Visitors were directed to maintain social distancing at the counters by standing in the square shaped boxes. Masks are compulsory and the entire tourist flow is monitored by CCTV cameras.

Separate routes were earmarked on the Palace premises for entry and exit and arrangements were made for thermal scanning of tourists at the entrance. Sanitisers were made available to visitors at many points and before their entry and exit. Mysuru Zoo and Karanji Lake were also opened. Here too, there are strict measures so that all visitors adhere to COVID-appropriate behaviour.

Apart from rush and series of traffic jams within the city on all roads like Sayyaji Rao Road, JLB Road, Ashoka Road, D. Devaraja Urs Road, K.R. Circle, Dhanvantri Road, bumper-to-bumper traffic was witnessed on the Mysuru-Bengaluru Highway. There was huge vehicle density on both sides of the road till Srirangapatna with bottlenecks witnessed at Columbia Asia Hospital Junction and Siddalingapura.

At many stretches, the Traffic Policemen were struggling to operate the traffic signals with vehicles coming from all directions. Likewise, the Hunsur Road, H.D. Kote Road, Nanjangud Road, T. Narasipur Road, Bannur Road also witnessed heavy traffic in the morning.