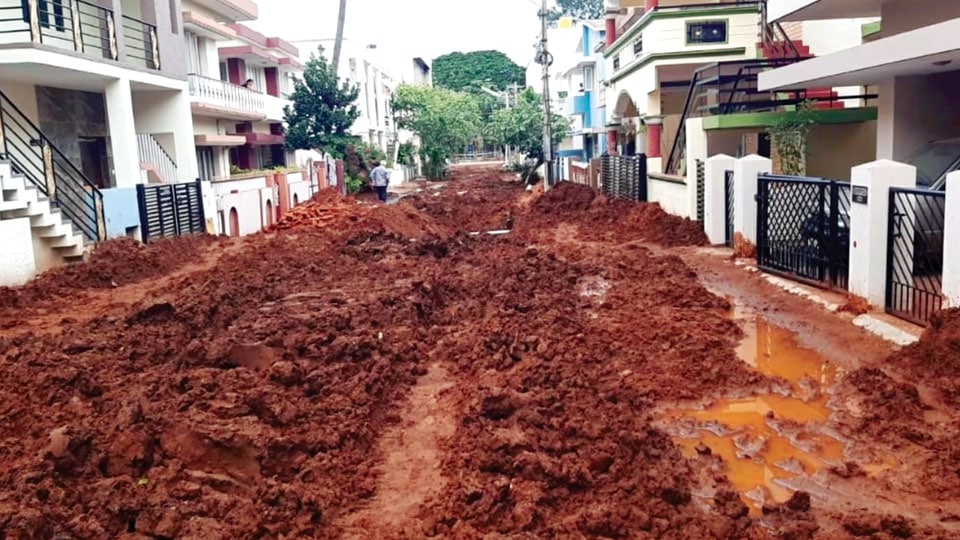 Even an ambulance cannot be summoned in emergencies amidst pandemic, fears an elderly citizen

Mysore/Mysuru: Unscientific Underground Drainage (UGD) works has forcibly ‘quarantined’ the residents of Saraswathipuram 6th Main Road as they are unable to come out of their houses or even take out their vehicles for work or during emergencies.

Just a couple of minutes of rain is enough to convert this dug up road in MCC Ward No. 47 into a slushy mess resembling a paddy field. The earth moving machine, which has been deployed to dig a trench on the road has dumped the excavated earth in front of houses and has allegedly damaged drinking water pipeline, telephone and underground power cables.

Such an unscientific work taken up on the nearly 100 mts long road about two weeks ago has forced the residents to stay indoors as the excavated mud is dumped right in front of the gates of the houses which are mostly occupied by senior citizens. Not only is the road now un-motorable, it is not even fit to walk on since about 15 days.

A senior citizen, who wished to remain anonymous said that the works of laying new pipes has been going on since 15 days for which the earth moving machine had dug up a nearly 8 feet deep trench and the excavated mud is dumped right in front of the gates forcing the residents to stay indoors. It is very difficult to step out to purchase daily needs and even medicines, the senior citizen said and added that slush was entering the houses due to rains.

READ ALSO  Pay to park in front of your own house!

But the biggest fear is for the senior citizens on the road who in these pandemic times may need ambulance services and no motorised vehicle can enter the road.

Many residents alleged that not even a small pathway is made for them to go out of their houses for purchase of vegetables as vendors are unable to bring their carts on this road.

They alleged that ever since the road was dug up in an unscientific manner, they have been calling the area Corporator and the MLA many times asking them to visit the spot and instruct the workers to at least make a pathway for them to move around but their pleas have fallen on deaf ears and no action taken till date.

The residents said that many have slipped and fallen down when they stepped out of their gates to purchase medicines and added that the civic authorities may be waiting for the residents to fall and break their bones to take necessary action.

Some concerned citizen groups are considering filing “negligence in public works” case against the contractor.