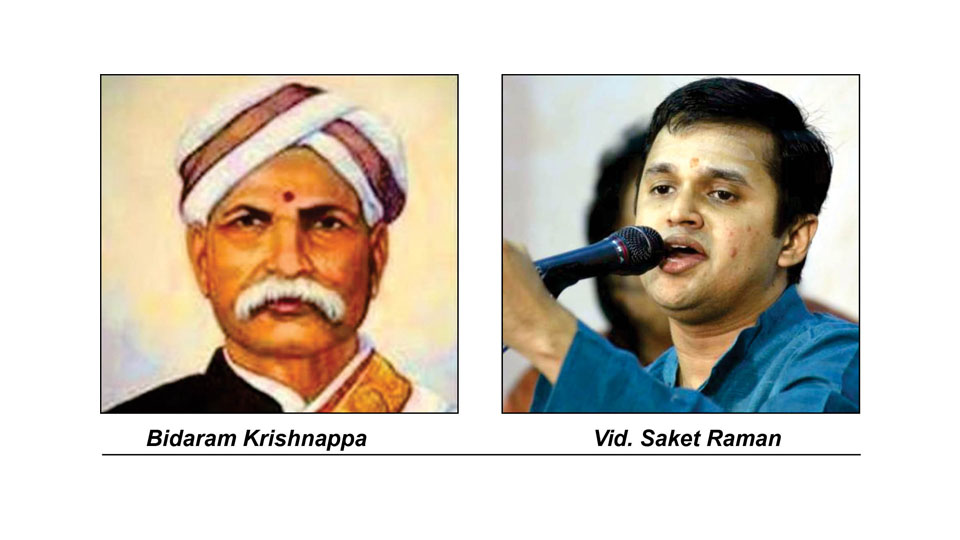 Vocal concert will be presented by Vid. Saket Raman. He will be accompanied by Vid. Nishanth Chander on violin,  Vid. Tumkur B. Ravishankar on mridanga and Vid. Sharath Koushik on ghata.

Profile:  Bidaram Krishnappa was a Konkani-speaking Gowda Saraswath Brahmin and a native of Nandalike in Udupi district. When he was a boy he had a chance encounter with a rich businessman who loved music. This happened when hungry Krishnappa, who came from a poor family, was singing a devotional song (devaranama) in a local temple. Impressed with his voice, the merchant sponsored Krishnappa to train under the guidance of a musician called Ramaswamy. He later came under the influence of Tammayya and Veena Sheshanna.

Bidaram Krishnappa is credited with having popularised the singing of Kannada devaranama on stage. He adapted certain concepts of Hindustani music into his Karnatak compositions. For his scholarship in music, he earned the titles “Shudda Swaracharya”, “Pallavi Krishnappa” and “Gana Visharada.” One of his disciples, T. Chowdiah, went on to become a music legend.

Saket Raman, one of the top performing Karnatak musicians, is a prime disciple of Padma Bhushan Lalgudi Jayaraman. He started learning vocal from late Srirangam Krishnamurthy Rao at the age of 4 and subsequently under late Savitri Satyamurthy.  He currently learns rare kirthanas of Trinity and other yesteryear composers from Vid. Nagai Muralidharan; voice culture and Hindustani music from Sangeetha Kalanidhi T.V. Gopalakrishnan.